The precursor of the "B" series engine was a 1200 cc OHV engine which was used in the 1947 Austin A40 Devon. This A40 Devon engine was based on a pre-war Side-valve design. Austin realised that eventually they would need an engine that could power many of its forthcoming medium-sized cars, and this would require an engine of at least 1500 cc capacity. Since the A40 Devon engine could not have its capacity enlarged, a new engine was designed, which, although superficially similar, was longer and heavier than the A40 Devon engine. The design of this new engine commenced around January 1952, and was designated as the "B" series. Displacements ranged widely from 1.2 L to 2.4 L, the latter being an Australia only production six-cylinder variant. 1.5 L and 1.8 L displacements were most common. Petrol versions were produced in the greatest numbers, but diesel versions exist for both cars and marine applications.

The engine was of conventional construction with a one-piece crankcase and cylinder block in cast iron with the crankcase extending down to the lowest level of the main bearing caps, and with cylinder head also usually in cast iron. The sump was made from pressed steel. Early engines used a three-bearing crankshaft, but later engines used five bearings. On all except the rare twin overhead camshaft variant, the camshaft — which was chain driven and mounted low in the block — operated the overhead valves via pushrods and rocker arms. The two inlet ports in the non-crossflow cylinder head were shared between cylinders 1 + 2 and 3 + 4 and the three exhaust ports between cylinder 1, 2 + 3 and 4. Valve clearance was adjustable by screws on the rocker arms with access to the tappets by two side covers on the engine block, this feature being a hang over from side valve engine design, but it provides easy access to the camshaft tappets.

After the formation of British Motor Corporation (BMC) it was used in the following vehicles: 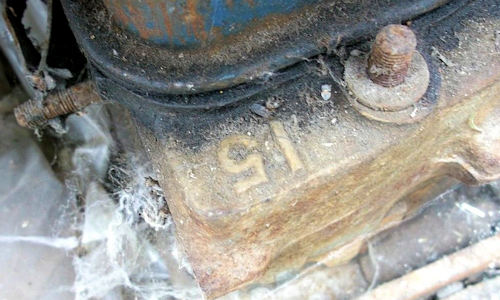 A special Twin-Cam (DOHC) version of the 1588 cc B-series engine was produced for the MGA. Output was 108 bhp (81 kW) at 6700 rpm in the high-compression (9.9:1) version and 100 bhp (75 kW) in the optional low-compression (8.3:1) version. The engine block was cast iron, but the crossflow eight-port cylinder head was of aluminium alloy. Drive to the twin camshafts was by chain from a gear-driven, half-speed shaft running in the space that would have been occupied by the conventional camshaft. This engine gained a reputation for being unreliable in service, especially in the high-compression version which needed high-octane fuel, but this has now been largely overcome. The piston burning habits — thought to be the result of ignition timing — was later discovered to be due to a vibration induced lean burn situation involving the float bowls, easily correctable by flexibly mounting the carburettors.

A total of 2,111 cars were built, in both coupé and roadster versions.

A very few engines with the special displacement of 1762 cc were produced for racing purposes.

There was also a diesel version of this capacity, used in the Leyland Sherpa van, and built under license in Turkey for many years. It is still widely used on narrowboats on the canals of the UK.

There was a 2433 cc six-cylinder unit, named "Blue Streak", which was used in the Australian Austin Freeway and Wolseley 24/80.

There were two series of engine numbers used; BMC changed the system at the end of 1956.

Numbers were of the style "BP15GB" followed by a serial number, where:

Numbers were of the style "15GB-U-H" plus a serial number, where:

Numbers were simplified to "18 V" plus a serial number, where 18 represents the capacity and V = vertical, i.e. longitudinal (in-line, not vee-arranged) engine with rear-wheel drive, and H = Horizontal, i.e. transverse engine with front-wheel drive.

There was sometimes a country indicator after the first part of the code, e.g. "18V-Z" was use for some United States (except California) MG MGB engines.