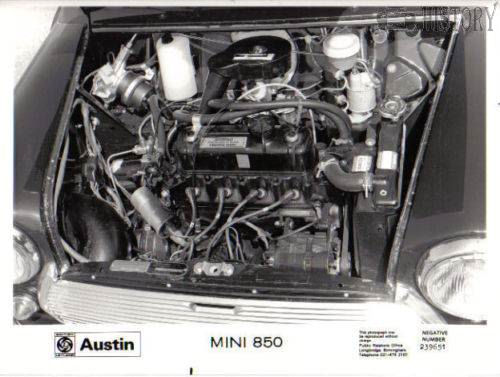 Austin Motor Company's small straight-4 automobile engine, the A-Series, is one of the most common in the world. Launched in 1951 with the Austin A30, production lasted until 2000 in the Mini. It used a cast-iron block and cylinder head, and a steel crankshaft with 3 main bearings. The camshaft ran in the cylinder block, driven by a single-row chain for most applications, and with tappets sliding in the block, accessible through pressed steel side covers for most applications, and with overhead valves operated through rockers. The cylinder head for the overhead-valve version of the Austin series A engine was designed by Harry Weslake – a cylinder head specialist famed for his involvement in SS (Jaguar) engines and several F1 title winning engines.

The A-Series design was licensed by Nissan of Japan, along with other Austin designs. That company quickly began modifying the A-Series as the Nissan A engine, and it became the basis for many of their following engines.

All engines had a cast iron head and block, and two valves per cylinder in an OHV configuration. Engines were available in Diesel in the BMC tractor.

All A-series engines up until mid-1970 were painted in British Standard (381c) 223 Middle Bronze Green. : Source Austin Morris (BL) internal documents archives. This does not include overseas production models such as Australian manufacture.

A diesel version of the 948 cc A-Series engine (producing 16 hp (12 kW) at 2,500 rpm and 38 lb·ft (52 N·m) torque at 1,750 rpm) was produced for the BMC Mini Tractor. It was developed with the help of Ricardo Consulting Engineers. This engine has dry liners. The block is almost identical to the petrol engine. the oil pump has been removed from the camshaft and is driven by an extension to what would have been the distributor drive. A petrol version of this modified engine was 'reverse-engineered' for use in the Mini Tractor whilst retaining parts commonality with the diesel variant, rather than using a standard petrol A-Series unit. The diesel A-Series was also sold as a marine engine under the BMC name alongside the diesel B-Series engines.

British Leyland was keen to update the old A-Series design in the 1970s. However, attempts at replacement, including an aborted early-70s Rover K engine and an OHC version of the A-Series, ended in failure. During the development of what would become the Austin Metro, engineers tested the A-Series against its more modern rivals and found that it still offered competitive (or even class-leading) fuel economy and torque for its size. While in the 1970s the A-Series had begun to seem dated against a new generation of high-revving overhead cam engines, by the end of the decade a new emphasis on good economy and high torque outputs at low speeds meant that the A-Series' inherent design was still well up to market demands.

Given this, and the lack of funds to develop an all-new power unit, it was decided to upgrade the A-Series unit at a cost of £30 million. The result was the 'A-Plus' Series of engines. Available in 998cc and 1275cc, the A-Plus had stronger engine blocks and cranks, lighter pistons and improved piston rings, hydraulic tensioner units for the timing chain and other detail changes to increase the service interval of the engine (from 6,000 to 12,000 miles). More modern SU carburettors and revised manifold designs allowed for small improvements in power without any decrease in torque or fuel economy. Many of the improvements learnt from the Cooper-tuned units were also incorporated, with A-Plus engines having a generally higher standard of metallurgy on all units, where previously only the highest-tuned engines were upgraded in this way. This made the A-Plus engines generally longer-lived than the standard A-Series, which had a life between major rebuilds of around 80,000 to 100,000 miles in normal service. Studies were made into upgrading the engine to use five main crankshaft bearings but the standard three-bearing crank had proven reliable even in high states of tune and at high engines speeds, so it was not deemed worth the extra funding.

The new engines received distinctive 'A+' branding on their rocker covers and the blocks and heads were colour-coded for the different capacities: yellow for 998 cc and red for 1275 cc engines. 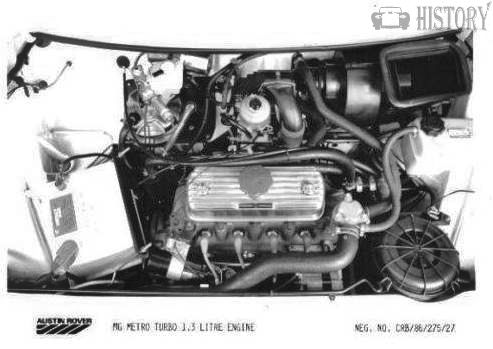