The Bedford OB model was a bus or coach chassis introduced in 1939. It was designed as a successor to the Bedford WTB. The OB has a wheelbase of 14 feet 6 inches (4.42 m), and is a semi-forward control model, designed to carry 26 to 29-passenger bodywork. It is fitted with a 27.34 horsepower petrol engine, and has a four-speed manual gearbox and fully floating rear axle. The brakes are of the vacuum servo-assisted hydraulic type.

Although only 73 were built prior to the cessation of production due to World War II, it reappeared in a largely unchanged form at the end of the war, continuing in production until 1951. A total of 12,766 were produced, making it one of the most popular buses of its type ever.

Bedford co-developed with Duple the "Vista" coachwork for the OB, fronted by a classic bullnose. The ash framework was reinforced with steel, and the floor made from hardwood with softwood tongued and grooved boarding, with the exception of the cab area which was finished with alloy chequerplate. Seating capacity was normally 29 with overhead luggage racks provided for passengers, whilst the rear luggage boot was also used to store the spare wheel. The price of a complete coach, including finishing in a two-colour livery, was £1,314.10s for a 27 seater, and £1,325.10s for a twenty nine seater.

Geared to reach speeds of at least 40 miles per hour (64 km/h), which was fast for its day, the OB is remembered by many for its characteristic gearbox whine.

The Bedford "O" type lorry chassis was introduced in August 1939, with a coach-chassis version named the "OB". Duple Coachbuilders modified their 'Hendonian' body to fit the chassis, which at 14 ft 6 in (4.42 m) was longer than the previous WTB model. The six cylinder overhead valve power unit with a capacity of 3519 cc, introduced in 1938, developed 72 bhp (54 kW; 73 PS) at 3000 rpm.

Only 73 OB buses were built in the two months before production ceased at the outbreak of World War II. All of Vauxhall and Bedford production was turned over to the war effort, specifically producing the Churchill tank. 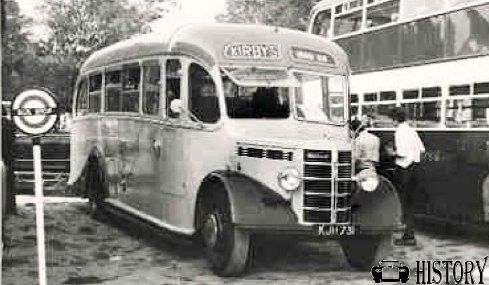 The Bedford OWB was produced during the war to the same basic design as the OB, but with simplified bodywork and a more austere interior.

Bedford restarted the production of the OB again in October 1945, this time at the Bedford Dunstable plant.There were only minor changes to the pre-war design. From the end of the war until 1951, a total of 12,693 OB's were built. The Vista remained Duple's standard OB body, until production ceased in 1951.It was succeeded by the Bedford SB.

Some wartime OWBs were rebuilt to post-war OB standard.

The OB is one of the most popular coaches in preservation. There are known to be 180 still in existence, nearly 70 in roadworthy condition, and 30 are fully PCV'd (Passenger Carrying Vehicle) for private hire work.

2009 marked the 70th Anniversary of the OB. Commemorated by a gathering in August, 30 OB's attended the event at Vauxhall Motors in Luton. The vehicles were all on display outside the Vauxhall Museum before making a road run to Bletchley Park. 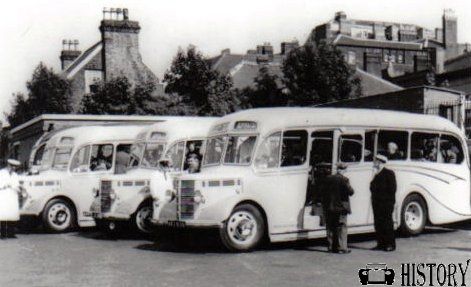 Bedford OB coach in The Mouse That Roared Movie,from 1959