The Bedford Beagle was a Light estate vehicle produced between 1964 and 1973 by Bedford in Luton, England. part of Vauxhall.

The Bedford Beagle was an estate car conversion of the Bedford HA 8cwt van with integral chassis and a carrying capacity of 882 1b, (400 kg) which itself was based on the Vauxhall Viva HA built over several generations.The estate car has 2  doors and 5 seats the front seats separate. The conversions were undertaken by Martin Walter Ltd in Folkestone, Kent, most famous for Dormobile campers based upon the larger Bedford CA commercial vans. Whilst the vans were very common at one time, the Beagle was altogether rarer and there are very few left today.

The Beagle formed the basis of the Roma, a camper van designed by Martin Walter Ltd. Roma was marketed in standard and deluxe forms, both featuring standing headroom of 6 ft 5ins and a full length 6 ft double bed. A third bunk, fitted into the canopy of the elevated roof, is a feature of the deluxe version of the Roma.

Introduced in 1964, originally with the 1057 cc engine, the Beagle was basic, with drum brakes all round and minimal interior trim.

The Beagle was finally discontinued in 1973. It was more or less replaced by the superior Viva HC estate cars. 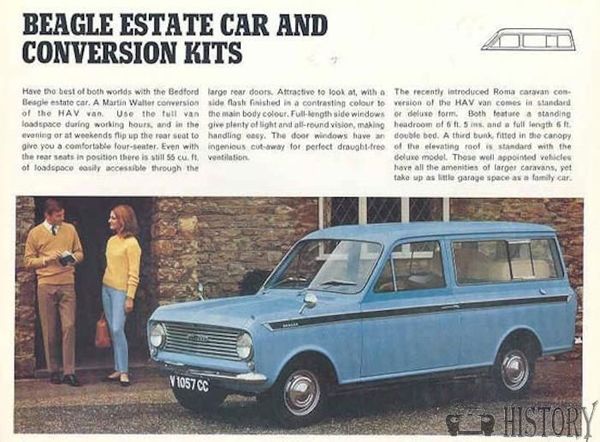