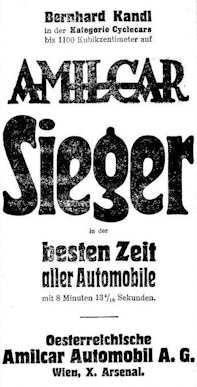 The Österreichische Amilcar-Automobil AG was a manufacturer of automobiles in the 1920s from Austria . The brand name was Amilcar

The company was founded in 1924 in Vienna for the production of automobiles. The company headquarters was in Arsenal Vienna , Austria . Director was Karl Pfeffer.

The vehicles was a sporty small cyclecar called the Amilcar from the French manufacturer of the same name. By 1925 ended the production.