Automotive manufacturer Vienna, Austria From 1911 to 1925. 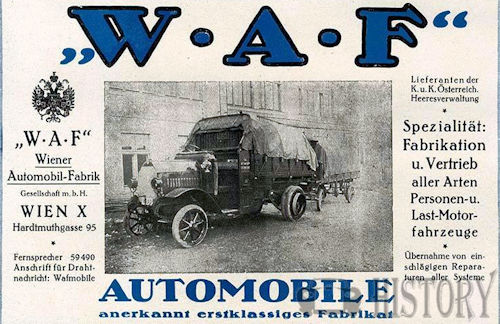 The Wiener Automobil-Fabrik GmbH was a manufacturer of automobiles and trucks from Austria-Hungary , later Austria . The company may not compete with the Wiener Automobilfabrik AG, vorm. Gräf & Stift are confused.

The company was founded in April 1911 in Vienna for the production of automobiles.  It was the successor to Bock & Hollender . owner was George Zachariades,  and Ferdinand Trummer the designer.  The brand name was WAF . In 1925 ended the production.

First, the company produced the models 25 hp and 35 hp , which were still based on the models that Trummer designed for Bock & Hollender. 1914, the 45 hp , also called alpine type appeared . He had a four-cylinder engine with 2800 cc displacement and 45 hp . The first participation in the Alpine Rally took place in 1912 and the next in 1914 with the 45 hp .

During the First World War lorries for Austria-Hungary army emerged .The small models with 1,5, 2 and 3 tons with shaft drive . The largest model with 5 tons had chain drive.