The Vanden Plas Princess 4-litre R with its Rolls-Royce all-aluminium 175 bhp engine was announced in August 1964. With an unusually high power to weight ratio the car gave easy cruising at 90+ mph and was capable of 112 mph.

The big change was under the bonnet where there was a result of more than two years technical collaboration between BMC and Rolls-Royce. The aluminium Rolls-Royce FB60 engine was a short-stroke version of the Rolls-Royce Military B: 4, 6 and 8 cylinder units of which more than 30,000 had already been produced The 6-cylinder engine weighed only 450 lb (204 kg). Its cubic capacity was 3.909 litres (239 cu in). Over-square: bore was 95.25 mm (3.8 in), stroke 91.44 mm (3.6 in); with a 7.8:1 compression ratio its output was 175 bhp (130 kW; 177 PS) @4,800 rpm. Twin SU carburettors were fitted. Both block and head were aluminium, tappets were hydraulic self-adjusting operating on overhead inlet and side exhaust valves. The counter-balanced crankshaft ran in seven bearings. 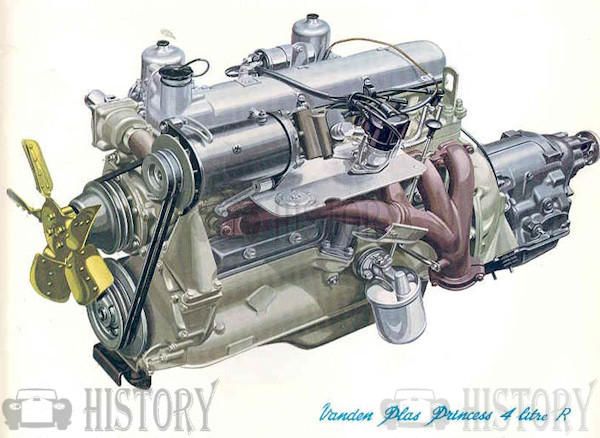 The new car was priced on a par with a Jaguar Mark X, just 50% more than its apparent predecessor the 3-litre car. It was a major change of market positioning aimed at the growing prestige and executive market in Europe and the United States. The 4-litre R was replete with polished walnut fascia —padded top and bottom, hide upholstered seats with fully reclinable backs and polished picnic tables for the rear passengers. A new automatic transmission was provided, Borg-Warner model 8, its first use in a British car and Hydrosteer variable ratio power steering accompanied wider tyres. Externally the fog lamps were moved up by the grille, the hindquarters tidied extended and adjusted to look more substantial and the tailfins replaced by small corner-ridges.

The background to the pricing was that from April 1961 tax relief on company cars was allowed only up to £2,000.

Joint production capacity of 12,000 cars a year was provided, final assembly and hand finishing was at the Vanden Plas works in Kingsbury London.

This car was a result of a joint BMC / Rolls-Royce project for a smaller Bentley code-named Java. Rolls-Royce finally withdrew from the venture. A need had been perceived for a relatively compact, mass-produced Rolls-Royce. Prototypes were made using the Austin-engineered central portion of the Vanden Plas, with restyled Rolls Royce and Bentley panels front and rear. Neither of these models made it into production, partly due to the successful 1965 introduction of the much larger Rolls-Royce Silver Shadow.

The Vanden Plas Princess 4-litre R remained in production until 1968, just ahead of BMC's merge into British Leyland. About 6,555 were built. It was the only mass-produced civilian vehicle from another manufacturer ever to use a Rolls-Royce engine.