The first generation Audi A4 (known internally as the Typ 8D) debuted in 1994,with production starting November 1994. It was built on the Volkswagen Group B5 (PL45) platform, which it shared with the fourth generation Volkswagen Passat (B5, Typ 3B). It had a front-mounted longitudinal engine and front-wheel drive. Many variations of the A4 were also available with Audi's quattro four-wheel drive system. The A4 was initially introduced as a four-door saloon/sedan; the Avant (estate/wagon) arrived a year later.

A wide range of internal combustion engines were available in European markets, between 1.6 and 2.8 litres for petrol engines; and a 1.9 litre diesel engine available with Volkswagen Group's VE technology, capable of achieving a 90 PS (66 kW; 89 bhp) or 110 PS (81 kW; 108 bhp), although Audi's 2.8 litre V6 engine, carried over from the old 80/90 was the only engine option in North America until 1997.

Audi also debuted their new tiptronic automatic transmission on the B5 platform, based on the unit Porsche developed for their 964-generation 911. The transmission is a conventional automatic gearbox with a torque converter offering the driver fully automatic operation or manual selection of the gear ratios. 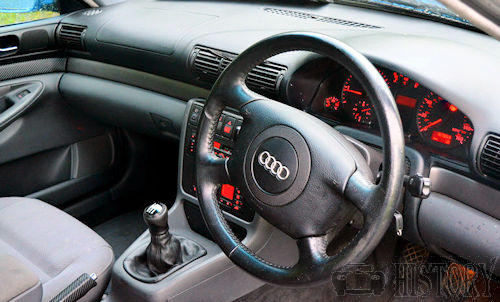 A refreshed B5 A4 range appeared at the 1997 Frankfurt Motor Show, with sales beginning in Europe in early 1998. The 2.8 litre 30-valve V6 engine replaced the 2.8 litre 12-valve. A 2.5 litre V6 Turbocharged Direct Injection (TDI) diesel engine with 150 PS (110 kW; 148 bhp) was standard on the quattro. A six-speed manual gearbox was available, as well as the new high-performance Audi S4, now part of the A4 lineup (the previous S4 had been an Audi 100). Cosmetic updates included new rear lights, headlights, door handles, and other minor exterior/interior changes.

In mid-1998, the 1.8 20vT engine available outside Europe had its power output raised to 170 PS (125 kW; 168 bhp). The previous KKK K03 turbocharger, although fundamentally unchanged, received revisions on the turbine side to prevent cracking due to heat The 12-valve V6 was replaced by the 30-valve unit which had been available in Europe for two years.

A further facelift took place across the A4 and S4 platform during the 1999 model year; changes were largely cosmetic, but affected many components, such as both front and rear bumpers, the front and rear lights, the center console, and door handles

In 1999 Audi also debuted an even higher performance RennSport model, the RS4 Avant, like its predecessor RS2, available only in the Avant bodystyle. 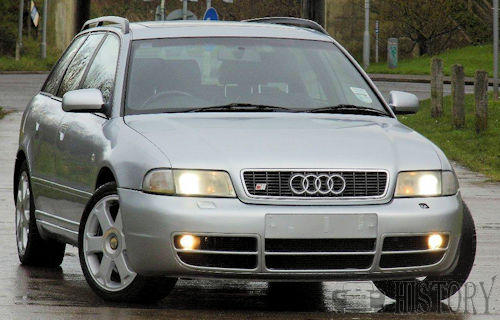