At the 2003 Geneva Motor Show, Audi launched the second-generation of the A3, the Typ 8P, designed by Gary Telaak during 2000 (however, the final design was frozen in 2001). Originally launched only as a three-door hatchback with four-cylinder engines, it featured a new automobile platform (the PQ35 platform), a redesigned and more spacious interior, new petrol engines with Fuel Stratified Injection (FSI), and standard six-speed manual gearboxes (except on the base 1.6).

In 2005, the "S line" trim level, offering new decorative elements, became available and the three-door A3 received the same front end styling features as the Sportback model. For the first time, the A3 became available in the North American market, exclusively with the Sportback body, with the base 2.0 inline-four TFSI introduced in 2005 as a 2006 model, and the 3.2 VR6 quattro following in 2006.
TDI Clubsport quattro (concept)The five-door "Sportback" model was introduced in June 2004. The A3 Sportback is 80 mm (3 in) longer than the base three-door body, and includes improved rear cabin space and a larger luggage compartment (370 litres). It also received the new "single frame" front grille originally introduced in the A8 W12, which was later adopted across the whole A3 range.

The Audi A3 TDI Clubsport quattro is a concept car unveiled in 2008. Based on the Audi A3 three-door, it is an approach by Audi to address both performance and the environment.

The engine in the concept car is a turbocharged 2.0-litre diesel producing 224 horsepower (167 kW) and 332 lb·ft (450 N·m). of torque. It produces 113.8 horsepower (84.9 kW) per litre while meeting Euro 5 Diesel emission standards. It uses the quattro drive system with a six-speed manual transmission.

The chassis has Audi's Magnetic Ride Suspension system, lowering the vehicle 1.4 inches (36 mm) from the base model. It also has ceramic front brakes, a four-link rear suspension and electro-mechanical servo assist for the rack and pinion steering.

Exterior modifications include the widening of the three-door's grill, modifying the odd, and enlarging air intakes. Bolt-on fender flares and a large rear spoiler have been added. The interior changes include sport seats and a flat-bottomed steering wheel.

Audi debuted the updated single-frame grille in June 2004 with the launch of the five-door "Sportback" model. This new grille also became standard fitment to the three-door variant.

Audi introduced a number of changes to the A3 and S3 in 2008. These include revised nose and tail styling, with a modified grille and the new "trademark" daytime running lights, common rail 2.0 TDI engines, seven-speed S tronic dual clutch transmission availability for the smaller non-U.S. engines, and optional "magnetic ride" adaptive shock absorbers. In addition, the range now includes an S3 Sportback model.

The A3 2.0 TDI clean diesel is a version of Audi's A3 2.0 TDI for the North American market, making it the second Audi TDI vehicle sold in North America, following the Audi Q7 TDI in 2008. It is a FWD vehicle with S-tronic transmission with Hill-hold assist, Sirius satellite radio, Leather seats and steering wheel, Auxiliary audio input, Dual-zone climate control, 17 in (432 mm) alloy wheels. The vehicle was unveiled at the 2009 North American International Auto Show. This US model would begin sale in the first quarter of 2010 as a 2010 model year vehicle.

In August 2006, Audi announced the arrival of the second generation S3. Offered in three- and five-door body styles, the second generation—Typ 8P—S3 is powered by a modified and uprated Volkswagen Group-sourced 2.0-litre turbocharged FSI petrol engine, with a maximum output of 195 kW (265 PS; 261 bhp). As with all Audi S models, the design was done in-house by quattro GmbH. The engine features uprated high-performance pistons, revised boost/fuel mapping, increased turbocharger size (KKK K04) and larger intercooler. The most powerful form of this widely used engine, and quattro four-wheel drive, makes for a 0–100 km/h (0–62 mph) time of 5.5 s, and an electronically limited top speed of 250 km/h (155 mph). Audi offers both six-speed manual and six-speed S-Tronic automatic transmissions with the S3.

The chassis has had the spring rating and dampers revised, along with the body kit. Like its predecessor, although badged a "quattro" model, the S3 does not employ a Torsen centre differential (as in other common quattro models), but instead uses the Swedish Haldex Traction system in its on-demand four-wheel drive transmission, due to the transverse engine layout.

Audi has stated the S3 will not be sold in North/South America, although it is available in Mexico. It has announced a 2.0T quattro model for the North/South American market due out in 2009/2010 to coincide with the A3 body upgrade. 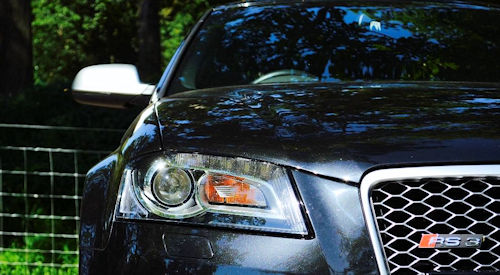 In November 2010, Audi announced the Audi RS3 Sportback, which entered production in 2011. Only available as a five-door, it is equipped with a 5-cylinder, 2.5-litre 340 metric horsepower (250 kW; 340 hp) engine, paired with a seven-speed S-Tronic transmission, and the Quattro on-demand four-wheel drive system.

The Audi RS3 is only available in a five-door Sportback version and no manual transmission option. Its acceleration is quoted as 0 to 62 mph (0 to 100 km/h) in 4.6 seconds, with an electronically limited top speed of 155 mph (249 km/h). The RS3 is assembled at the Audi plant in Győr, Hungary.First deliveries started in early 2011.