Audi A4 Second Generation B6

An all-new A4, internally designated Typ 8E, debuted in late 2000, now riding on the all-new Volkswagen Group B6 (PL46) platform. The car's new styling was a great success, inspired by the C5 (second-generation) Audi A6. The 1.6 litre base model powerplant remained unchanged, but most other petrol/gasoline engines received either displacement increases, or power upgrades.
The 1.8 litre 20-valve Turbo was now available in two additional versions, with 150 PS (110 kW; 148 bhp) or 180 PS (132 kW; 178 bhp), this one with a standard six-speed manual gearbox, while the naturally aspirated 1.8 litre inline-four engine and 2.8 litre V6 were replaced by 2.0 litre, and all-aluminium alloy 3.0 litre units, still with five valves per cylinder, the most powerful of which was capable of 220 PS (162 kW; 217 bhp) and 300 newton metres (221 lb·ft) of torque. The 1.9 Turbocharged Direct Injection (TDI) engine was upgraded to 130 PS (96 kW; 128 bhp), with Pumpe Düse (Unit Injector) (PD) technology, and was now available with quattro permanent four-wheel drive, while the 2.5 V6 TDI high-end model was introduced with 180 PS (132 kW; 178 bhp) and standard quattro. This generation of quattro consists of default of 50:50 front to rear dynamic torque distribution. A Bosch ESP 5.7 Electronic Stability Programme (ESP) system, with Anti-lock Braking System (ABS), brake assist, and Electronic Brakeforce Distribution (EBD) were standard across the range.

Audi also introduced a continuously variable transmission developed by LuK, named multitronic, which replaced the dated conventional automatic transmission on front-wheel drive models. The transmission won considerable praise from the automotive press, and is generally regarded as being the best of its type in the world, due to its light weight and promptness in response. This high strength chain driven CVT is made from highly durable metals and utilises a very high grade, purpose-designed fully synthetic lubricant. However there have been widespread complaints from consumers around the world that the transmission box is prone to electronic glitches as well as mechanical problems.

Borrowing from the Audi A6, the boot was redesigned to remove the extension of the top edge with a smoother fold line, and the rear light assemblies now formed part of the top line, these styling cues were eventually borrowed by other European as well as Asian manufacturers.

The basic equipment that is standard across all versions of the Audi A4 Saloon (00-04). 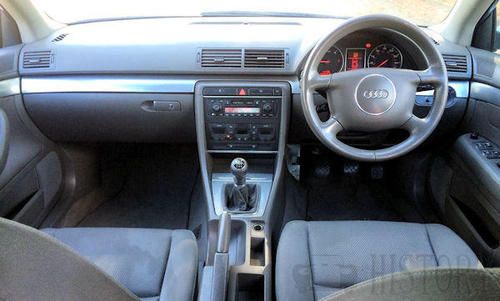 An "ultra sport package" named 'Ultra Sport' was introduced in the North American market shortly before the B6 was replaced by the B7. It included aluminium interior trim and door sills, "S line" steering wheel, front and rear spoilers, side skirts, and quattro GmbH designed 18-inch RS4 alloy roadwheels. 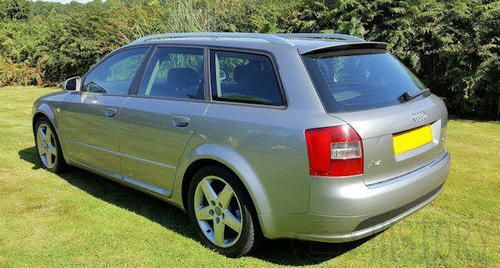