The DB2/4 (often called a DB2/4 Mk1) is a grand tourer sold by Aston Martin from 1953 through 1957. It was based on the DB2 it replaced, available as a Drophead coupe (DHC) and 2+2 hatchback (known by Aston Martin as a Saloon) well ahead of the times. Other changes included a wraparound windscreen, larger bumpers, and repositioned headlights. A handful of Bertone bodied spiders were commissioned by private buyers.

Of the 565 Mark I models produced, 102 were Drophead Coupe models.

Three works cars were prepared for the 1955 Monte Carlo Rally and two for the Mille Miglia, but the company's focus was on the sports-special DB3 model.

A Mark II model (Aston Martin DB2/4 MkII), introduced in 1955, allowed for an optional large-valve, high compression (8.6:1) engine capable of 165 hp (123 kW). Other changes include small tailfins, bubble-type tail lights as on the Morris Minor, and added chrome. The bonnet horizontal split line was also changed from door sill height to a horizontal line carried backwards from the top of the front wheel arch. A 2-seat Fixed Head Coupé (FHC) was new, in addition to the continued Drophead. Just 34 of the 199 Mark II cars used this new coupe body, being the personal choice of David Brown.

Three Mark II chassis were sent to Carrozzeria Touring in Italy to become Spider models. Touring would later help Aston with the Superleggera design of the DB4.

One significant behind-the-scenes change for the Mark II was the move of coachbuilding responsibilities from Feltham to the Tickford Coachbuilding Works in Newport Pagnell. David Brown had purchased the Works in 1954 and would move all of Aston Martin's operations there with the start of DB4 production.

A drophead coupé (DHC) appeared in the Alfred Hitchcock film The Birds. This car, which was bought in the mid-1960s by a Los Angeles resident, had a 327 Corvette motor (with automatic transmission) installed for "roadability" then was restored at that time, except for damage to the undercarriage from the filming which remained for historic interest. However, within two years the car was totalled by a subsequent owner. 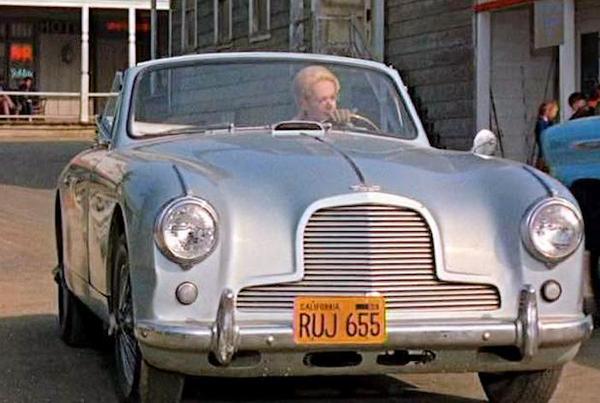