The Aston Martin DB2 is a sports car sold by Aston Martin from May 1950 through to April 1953. It was a major advancement over the 2-Litre Sports model it replaced, with a dual overhead cam straight-6 in place of the previously-used pushrod straight-4. The car featured a 2.6 L engine, and was designed as a closed coupé (described as a sports-saloon by Aston Martin). A later drophead coupé model was also introduced, accounting for ¼ of the model's total sales. The DB2 was extremely successful in racing, setting David Brown's company up for future success.

The prototype for the DB2 appeared as one of three Aston Martins at the 1949 24 Hours of Le Mans. The car was based on Claude Hill's tube-frame chassis, created for the 2-Litre Sports "DB1", with a closed coupé body design by Frank Feeley.

The DB2 was a potent competition car with tremendous potential, and the works team campaigned the model very actively across Europe. In 1950 and 1951 the DB2S did well at Le Mans while never having the sheer power necessary to challenge Ferrari and Jaguar seriously, and a DB2 won its class in the 1951 Mille Miglia race around Italy. In 1954 an enlarged version was introduced, known as the 'DB2/4' and incorporating two
occasional seats in the back of the cabin for use by children or by the 'legless midgets' so beloved of contemporary motoring journalists.
Ex-Auto Union engineer Dr Robert Eberan von Eberhorst was retained by Brown to develop a true competition model for the company, and this emerged first as the DB3 employing a tubular chassis frame and open roadster bodywork -which won the Goodwood Nine-Hours race in 1952. Late that year
DB3S were fitted with 2912 cc engines which then found their way into an improved DB2/4 capable of 125 mph. In 1953 the curvaceous DB3S sports-racer was developed from the DB3 to become the centrepiece of the beautiful Aston Martin competition line.

The production DB2 debuted at the New York Auto Show in April 1950. Although demand was high, the second, third, and fourth DB2 models to be produced competed at Le Mans in 1950. They achieved first and second in class that year; all three continued competing through 1951. The 21st example was raced by American sportsman Briggs Cunningham in the first Sebring race, December 1950 attaining second in class. Success brought fame to David Brown's resurgent company, convincing the company to begin a series of purpose-built racing models, starting with the DB3.

In total 411 DB2s were produced from their 1950 introduction through 1953. The first 49 cars used a square three-part grille in front with large rectangular side vents. This was soon updated with the more familiar integrated, rounded Aston Martin grille with horizontal slats. The three racing models were similarly upgraded establishing the company's new face. Among these 49 cars: two "Vantage spec" models. The first Vantage was LML 50/21 delivered in 1950 to racing driver Briggs Cunningham.

The car was a fixed-head coupé (FHC) with a tiny top-hinged boot in back containing a spare wheel. Luggage space was behind the front seats, accessed somewhat inconveniently from inside the car. A large single-piece bonnet was hinged at the front.

In April 1950, an engine with larger carburettors, inlet camshaft the same as the exhaust (increased duration) & higher compression ratio pistons (8.16:1) was "offered optionally", as Aston Martin's first Vantage upgrade. This was a power-only upgrade, with 125 hp (93 kW) available. However, the higher compression ratio engine was initially unsuitable for domestic market customers, since in the early 1950s Britain retained the war time austerity regime whereby UK fuel customers were restricted to 72 octane "Pool petrol". 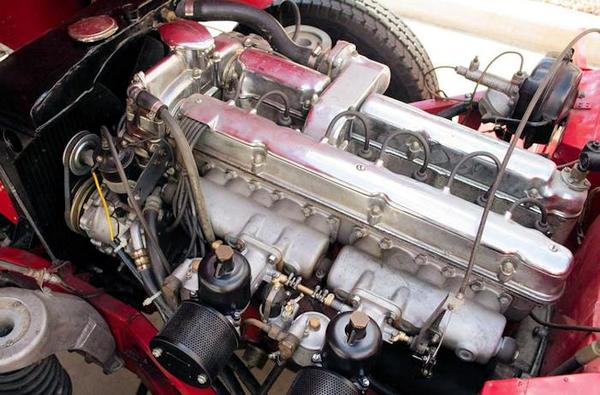 Many cars went back to Aston Martin to have later 3 ltr engines fitted, many more have been converted since.

The name "Vantage" was chosen after leafing through a thesaurus looking for suitable tags for higher performance variants of the then current model. In the same tradition later the names Volante for a convertible and Virage for a model in the 90s were created. 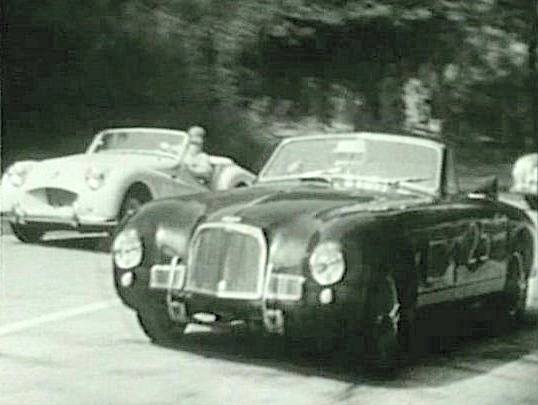