The Aston Martin DB5 is a luxury grand tourer that was made by Aston Martin and designed by the Italian coachbuilder Carrozzeria Touring Superleggera. Released in 1963, it was an evolution of the final series of DB4. The DB series was named honouring David Brown (the head of Aston Martin from 1947–1972). The DB5 is famous for being the first and most recognised cinematic James Bond car, first appearing in Goldfinger (1964).

The principal differences between the DB4 Series V and the DB5 are: The all-aluminium engine was enlarged from 3.7 L to 4.0 L, A new robust ZF five-speed transmission (except for some of the very first DB5s) and three SU carburettors Producing 282 bhp (210 kW), which propelled the car to 145 mph (233 km/h), this engine, available on the Vantage (high powered) version of the DB4 since March 1962, became the standard Aston Martin power unit with the launch in September 1963 of the DB5

Standard equipment on the DB5 included reclining seats, wool pile carpets, electric windows, twin fuel tanks, chrome wire wheels, oil cooler, magnesium-alloy body built to superleggera patent technique, full leather trim in the cabin and even a fire extinguisher. All models have two doors and are of a 2+2 configuration. A three-speed Borg-Warner DG automatic transmission was available as well. At the beginning, the original four-speed manual (with optional overdrive) was standard fitment, but it was soon dropped in favour of the ZF five-speed. The automatic option was then changed to the Borg-Warner Model 8 shortly before the DB6 replaced the DB5.

Just 123 convertible DB5s were produced (also with bodies by Touring), though they did not use the typical "Volante" name until 1965. The convertible model was offered from 1963 through to 1965. Originally only 19 of the 123 DB5 Convertibles made were left-hand drive. 12 cars were originally fitted with a factory Vantage engine, and at least one further convertible was subsequently factory fitted with a DB6 specification Vantage engine.

From October 1965 to October 1966, Aston Martin used the last 37 of the Aston Martin DB5 chassis' to make another convertible model. These 37 cars were known as "Short Chassis" Volantes and were the first Aston Martins to hold the "Volante" name. Although calling it a "Short Chassis" is a bit of a misnomer as the "short" comes from comparing it to the subsequent DB6, which has a longer chassis. When compared to the DB5, it is not "short" but rather the same size, however these cars differ to the DB5 convertible models as they feature DB6 split front and rear bumpers and rear TR4 lights, as also used on the DB6.

A prototype DB5 shooting brake was custom produced by the factory for David Brown, an avid hunter and dog owner, and 11-12 more coupés were custom modified for Aston Martin by independent coachbuilder, Harold Radford. The taillights used were Triumph units, and were also adopted for the succeeding DB6.

The Aston Martin DB5 is one of the most famous cars in the world thanks to Oscar-winning special effects expert (also known as 'the Real Q') John Stears, who created the deadly silver-birch DB5 for use by James Bond in Goldfinger (1964). Although Ian Fleming had placed Bond in a DB Mark III in the novel, the DB5 was the company's latest model when the film was being made.

The car used in the film was the original DB5 prototype, with another standard car used for stunts. To promote the film, the two DB5's were showcased at the 1964 New York World's Fair, and it was dubbed "the most famous car in the world", and subsequently sales of the car rose. In January 2006, one of these was auctioned in Arizona; the same car was originally bought in 1970 from the owner, Sir Anthony Bamford, by a Tennessee museum owner. A car, mainly used for promoting the movie, is now located in the Louwman Museum, Netherlands.The first DB5 prototype used in Goldfinger with the chassis number DP/216/1 was later stripped of its weaponry and gadgetry by Aston Martin and then resold. It was then retrofitted by subsequent owners with nonoriginal weaponry. The Chassis DP/216/1 DB5 was stolen in 1997 from its last owner in Florida and is currently still missing.

Within the universe of James Bond, the same car (registration BMT 216A) was used again in the following film, Thunderball, a year later.

A different Aston Martin DB5 (registration BMT 214A) was used in the 1995 Bond film, GoldenEye, in which three different DB5s were used for filming. The BMT 214A also returned in Tomorrow Never Dies (1997) and was set to make a cameo appearance in the Scotland-set scenes in The World Is Not Enough (1999), but these were cut in the final edit. Yet another DB5 appeared in Casino Royale (2006), this one with Bahamian number plates and left-hand drive (where the previous British versions had been right-hand drive).

Another silver-birch DB5 with the original registration BMT 216A is used in the 23rd James Bond film, Skyfall, during the 50th anniversary of the release of the first James Bond film Dr. No.

On 1 June 2010, RM Auctions announced the upcoming auction of a DB5 used in both Goldfinger and Thunderball. The owner (Jerry Lee, president/owner of WBEB Radio in Philadelphia, Pennsylvania) originally bought the car from the Aston Martin company in 1969. At the auction, the DB5 was sold for 2,600,000 Pounds Sterling.

The DB5 is famous for being the first and most recognised cinematic James Bond car. It was also used by actor Roger Moore, as he played a James Bond parody character in the film The Cannonball Run. Moore plays Seymour Goldfarb, Jr., a man who believes himself to be both Roger Moore and James Bond, who participates in a madcap, cross-country road race. The registration number BMT 216A also appears on an Aston Martin DB5 in "The Noble Sportsman", a 1964 episode of "The Saint" TV series starring Roger Moore.

The 1983 reunion telefilm The Return of the Man from U.N.C.L.E.: The Fifteen Years Later Affair includes a brief cameo by George Lazenby as "JB", a white-tuxedoed British man shown driving an Aston Martin DB5, who assists Napoleon Solo during a car chase. "It's just like On Her Majesty's Secret Service," enthuses a female character at the conclusion of the cameo. This special came out in 1983 the same year as Octopussy and Never Say Never Again.

It appeared in animated form in James Bond Jr in the very first episode 'The Beginning'.

In 2003, it appears in the action comedy film Charlie's Angels: Full Throttle, driven by Bernie Mac's character, Jimmy Bosley. It is only seen once in which Bosley is driving a witness, Max Petroni (portrayed by Shia LaBeouf) to his mother's house, to be safe from the O'Grady Crime Syndicate.

The 2004 French spy comedy film, called Double Zéro (directed by Gérard Pirès) also showed a DB5. It can be seen once in the film, when the two main characters go to meet the parody of Q.

In 2011, an Aston Martin DB5 appeared in heavily stylized form as "Finn McMissile", a British secret agent voiced by Michael Caine in the 2011 Pixar film Cars 2. The car character was a homage to the Bond DB5 although has also been known to bear resemblance to the Volvo P1800, as used by the fictional British secret agent Simon Templar in The Saint . 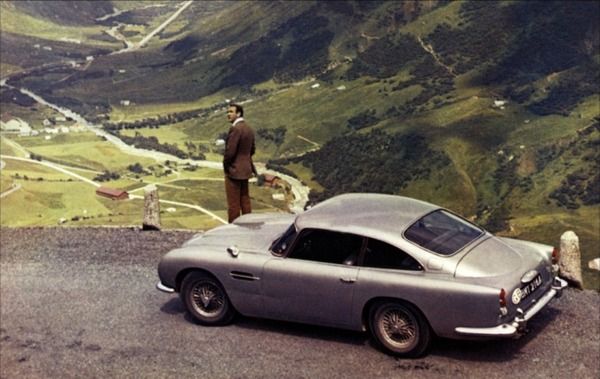 The Goldfinger DB5 with gadgets was sold on October 27, 2010 for $4.6m (£2.9m) to the car collector Harry Yeaggy. It features the pop out gun barrels behind the front indicators, the bullet shield behind the rear window and a 3-way revolving front number plate showing "GOLD FINGER" or "JB007" or "BMT216A".