The 1965 model year Classics underwent a major redesign of the new platform that was introduced in 1963; essentially the 1963-1964 design with a rectilinear reskin similar to that of concurrent Ambassadors.Fresh sheet metal design was applied to the original 112 in (2,800 mm) wheelbase and 195 in (5,000 mm) long integral body-frame with only the roof, doors, and windshield as carryovers.Unchanged was the suspension system including a torque tube with coil springs with a Panhard rod.

The Rambler Classic was now shorter than - as well as visually distinctive from - the Ambassador line, while still sharing the basic body structure from the windshield back. For the first time a convertible model was available in the 770 trim version. The two-door sedan was dropped from the 770 model lineup.

The 1965 Classic models were billed as the "Sensible Spectaculars," with emphasis on their new styling, powerful engines, and their expanded comfort and sports-type options, in contrast to the previous "economy car" image.

Popular Science magazine reported, "you can have a 1965 Classic as a penny-pinching economy car or a storming performance job."Additional performance options for 1965 included power front disk brakes with four-piston calipers that were supplied by Bendix. The standard 4-wheel drum brakes also continued to feature AMC's "Double-Safety" master cylinder system. The dual master cylinder was available in only one "Big Three" car: Cadillac.

At mid-model year, AMC introduced the 1965 Marlin, a halo car for the company. It was a mid-sized fastback design using the Rambler Classic platform. Marketed as a personal luxury car, the Marlin had unique styling and featured an exceptional array of standard equipment. 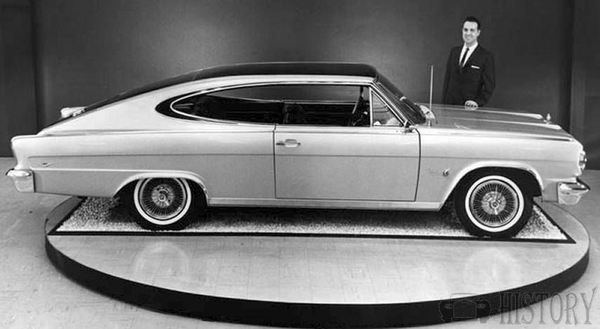 The 1966 model year Rambler Classics received minor trim changes and additional standard safety features, including padded dash and visors, left outside mirror, as well as seat belts for the front and rear passengers. The 660 mid-trim level was dropped leaving the 550 and 770 models for 1966. Available for the first time was a floor mounted four-speed manual transmission and a dash-mounted tachometer.

Classics received particular attention to the styling of the roofs for 1966. The two-door hardtop models received a rectangular rear window and more formal and angular "crisp-line" roofline that could be covered with vinyl trim. Sedans had an optional trim-outlined "halo" roof accent color. The station wagon's roof area over the cargo compartment was at the same level with the rest of the roof, no longer dipped down as in prior years. The wagons carried Cross Country insignia and featured 83 cubic feet (2.35 m3) of cargo space, as well as a standard roof rack. Two wagon seating capacities were available: a standard six-passenger version with two-rows of seats with a drop-down bottom-hinged tailgate incorporating a fully retracting rear window for accessing cargo, or in an optional eight-passenger version with three-rows of seats (the third rear-facing) and a left-side hinged rear fifth door.

The name Classic was no longer considered a positive factor in the marketplace and AMC began reshuffling model names in 1966.

A top-of-the-line version of the two-door hardtop Classic was offered under the historic Rambler Rebel name. It replaced the 770-H and featured special badges and standard slim-type bucket seats with optional checked upholstery with two matching pillows. Public reaction to the tartan touch appearing in some of AMC's "Project IV" automobile show tour cars, was judged favorable enough to make the unique trim available on the Rebel hardtop.

Serving as one example to verify how AMC products were routinely derided by various automotive press, Popular Science magazine wrote that the new "Rambler Rebel reveals a sudden interest in performance," but its handling package cannot overcome the car's obsolete suspension design. However, AMC was reluctant to forfeit their Nash engineered suspension design which employed a strut type front and panhard rod controlled torque tube rear drive system, both having long coil springs to place the upper spring seats higher into the body of the car. This feature was to afford a softer ride quality and better handling by reducing the geometrical leverage of the car's center of gravity for less body roll "sway" in cornering. What was labeled as "obsolete" is juxtaposed by noting how General Motors employed a similar suspension system on their third generation Camaro and Firebird nearly twenty years later which had McPherson strut front and a torque arm mounted rear drive axle.

A customized show car was displayed along production models during the 1966 automobile show circuit, the snow- and ski-themed Rambler St. Moritz station wagon. The wagon with three rows of seats featured tinted rear side "observation" windows that curved up and over the roof. The less than half of the original metal roof remaining over the cargo area was finished by a polished metal band and equipped with special ski rack. The exterior was a light ice-blue pearlescent paint, while the car's dark blue interior featured Corfam upholstery with a metallic embroidered snowflake in each seat back.

The cars saw a name change for 1966, from Rambler Classic 660 to Rambler Classic 770. Despite the "trim level" upgrade, the car was mostly the same, despite that it did get slightly more luxurious over the years. The two-door Rambler Classic 770 featured individual reclining front seats and its marketing focused towards sportiness.

The VAM Rambler Classic was not available in Mexico as a two-door hardtop, two-door convertible, or four-door station wagon. The Rambler Classic model enjoyed popularity and positive image among the Mexican public. For this reason in 1967, with arrival of AMC's completely new Rebel line in the mid-size market segment, VAM continued the Rambler Classic name for its new cars.

Noteworthy were AMC's overseas business ventures involving the production of Rambler Classics that were marketed in various international markets.

Industrias Kaiser Argentina (IKA) produced Rambler Classics in Córdoba, Argentina from 1962 to 1971. All were powered by the 3.77 L (230 cu in) overhead camshaft (OHC) straight-six "Tornado Interpector" engines that were originally developed by Kaiser Motors in the U.S. for the 1963 Jeep Gladiator pickups and Wagoneer vehicles. This engine was later produced in Argentina and increased the domestic (local sourced) content of the automobiles to gain tariff concessions for the imported components from AMC. In 1963, the best-selling model in Argentina was the IKA Rambler. A road test of an IKA Rambler Classic 660 by Revista Parabrisas noted the significant differences to the previous version, noting the stylized simple lines and more fluid design, as well as concluding that it is a large and comfortable ride for both the city and touring, as well as - depending on the driver - can be sporty.

Rambler Classics were assembled in Australia and New Zealand by Australian Motor Industries (AMI), Campbell Motor Industries (CMI) in Thames, New Zealand. They were made from Partial Knock Down (PKD) kits. The vehicles were partially assembled and painted at AMC's Kenosha, Wisconsin, factory. Thy were built with right-hand drive and the body had the engine, transmission, front suspension, rear axle, and doors installed. Some of the other components were boxed and shipped inside the car for final assembly by AMI or CMI. Interior components such as upholstery and various other parts were locally sourced to get import tariff concessions. The cars were also fitted with amber rear turn signal lights to comply with safety standards in Australia and New Zealand.

The Australian-assembled versions were identical in appearance to the U.S. models through the three generations.The base prices of Rambler Classics dropped with the introduction of the redesigned 1963 models due to the elimination of some standard equipment such as the recking seats and heater. Two four-door body styles were available: sedan and station wagon. A Classic sedan was offered in Australia for the first time with a manual transmission. However, the biggest selling model was the automatic six-cylinder Classic sedan with an automatic transmission. The AMI Rambler Classics exhibited high standards of assembly and finish.

All three generations of the Rambler Classics were assembled from CKD (Completely Knocked Down) kits in Renault's factory in Haren, Belgium and sold through Renault dealers in Algeria, Austria, Belgium, France, the Netherlands, and Luxembourg, The French automaker no longer had a large car in its own model range and the Rambler Classic was sold as an "executive car" in Renault's markets, and badged as the "Rambler Renault", under the terms of a cooperation agreement concluded between the two automakers on 21 November 1961.