American Motors billed the Marlin as a new addition to the company's self-styled "Sensible Spectaculars" model line. Backed by extensive advertising and merchandising, the car was officially announced on 10 February 1965, and unveiled in Rambler dealer showrooms on 19 March.

New car introductions, more significant in the 1960s than today, were often accompanied by special invitations and heavy publicity. The Marlin was advertised in 2,400 newspapers on its launch day, and American Motors' news releases positioned it as aimed at buyers wanting a sporty fastback that was also roomy and comfortable. This contrasted it with the smaller Barracuda and Mustang fastbacks that had arrived a year earlier. AMC's first model following the muscle car launches of the 1960s, the Marlin was intended to outflank competitors as a product they did not offer - a strategy now called "niche marketing".

It followed signature design features of the Ford Galaxie "Sports Roof", the Plymouth Barracuda, the Mustang 2+2, and the 1965 fastback models from General Motors, including the Chevrolet Impala "Sport Coupe" versions. A book on American muscle cars says V8-powered Marlins provided appropriate performance for the streamlined appearance.

Vincent Geraci (who became chief of product design and product identity at Chrysler after AMC's buyout), viewed the Marlin as "an exciting program ... We took a 1965 body design and turned it into a sportier version. But enlarging the car from its original concept [the Tarpon] and raising the roof produced an adverse effect on overall appearance."

Bob Nixon (who after AMC's buyout in 1987 became Jeep's design chief at Chrysler) dismissed the project as an "ugly embarrassment" and said that the assignment to create a sporty fastback on the Classic platform was "like trying to build a Corvette on a Buick sedan body. It just doesn't work."

Carl Cameron, designer of the original Dodge Charger, named the Marlin as the only competition for his 1966 car even though, he said, the Marlin lacked some of the Charger's features and it was "very different". Contrary to the view that the Charger was a "clone" of the Marlin, Cameron said that the starting-point for his design was the fastback 1949 Cadillac, and that any similarity to the Marlin was coincidental. He added that as a result of the exceptionally tall Abernathy's insistence on being able to sit in the Marlin's back seat, "those cars had big squared-off roofs" whereas the Charger's roof treatment was "rounded off, much more pleasing to the eye.

Standard features, which focused on comfort and luxurious appearance, included deluxe exterior trim, individual reclining front seats, front and rear center armrests when bucket seats were selected, and interiors from AMC's two-door Ambassador model, including dashboard and instrument panel. On the Marlin, the dashboard was trimmed with engine-turned aluminum. Interior door panels were finished with carpeting and stainless steel trim, when many cars at the time had cheaper stamped vinyl glued to cardboard. Retractable front seatbelts where optional. The reclining bucket seats could be ordered with headrests. The Marlin was also one of the first American automobiles with front disc brakes (four-piston design, by Bendix) as standard. It had drum brakes without servo assistance on the rear.

A total of 2,005 Marlins were built with the smallest engine option, a 145 hp (108 kW; 147 PS) 232 I6. The AMC-designed 270 hp (201 kW; 274 PS) 327 cu in (5.4 L) 4-barrel V8, often paired with an automatic transmission that had the shifter in a floor console, accounted for 42% of total production, while less than 6%, regardless of engine option, had the innovative "Twin-Stick" manual transmission (with overdrive). The center console-mounted controls offered one longer stick for the regular gears, with a second shorter lever for overdrive selection. It can be shifted as a 5-speed: from 1st to 2nd, to 2nd+OD, to 3rd, to 3rd+OD. Other options included "Solex" tinted glass (70% of production), power steering, heavy-duty suspension, "Twin-Grip" limited slip differential, air conditioning, adjustable steering wheel, power windows, and a choice of AM radio or an AM/FM monaural unit (50% of production) with "Duo Costic" rear speaker and "Vibra Tone" system to simulate stereophonic sound (stereo broadcasting was not yet widely available in the U.S.). Only 221 Marlins were built without a radio. Wide-ranging interior colors and upholstery choices were available, and options for the exterior, including accent colors for the roof and side window trim, enabled further customization.

The MSRP price was US$3,100 (US$23,199 in 2014 dollars), compared with $3,063 for a bench seat (six-passenger) version of the Rambler Classic 770 2-door hardtop, which did not have the extra features and luxurious interior of the Marlin. 10,327 Marlins were sold in the abbreviated first year of production.

The Rambler Marlin became known as the AMC Marlin starting with the 1966 model year. All references to the historic Rambler brand name were removed from the car and promotional materials. This was part of Roy Abernethy's remake of AMC's corporate identity, divorcing the larger car lines from the Rambler brand and the economy compact car image. The other changes were minor (e.g. a slight modification to the extruded aluminum grille, a front sway bar made standard on six-cylinder models, and an optional black vinyl roof cover that continued over the trunk opening). New was an electronic tach on the top of the dash.

The year also saw the introduction of the fastback Dodge Charger, a derivative of the intermediate-sized Dodge Coronet, and a sporty model in direct response to the Marlin. Together, the Charger and Marlin were "unusual, distinctive and in a class by themselves." General Motors and Ford also positioned products similar to the Marlin as specialized "personal luxury" coupes and introduced 2-door fastback versions of their full- and intermediate-sized car lines.

AMC broadened the car's market appeal by lowering the base price to US$2,601 (US$18,906 in 2014 dollars) and offering more options. For example: high-level trim packages that had previously been standard, as well as the availability of a floor or center console mounted 4-speed manual transmission and a dash-mounted tachometer, affected small changes in pricing and equipment that paralleled the competition. By comparison, Chrysler did a similar thing with the pricing and content of its Dodge Charger from the 1966 to the 1967 model years. Despite these changes, Marlin production fell to 4,547 in 1966.

Popular Science magazine road test comparison of three 1966 sporty fastbacks (Ford Mustang, Plymouth Valiant, and AMC Rambler) highlighted the Marlin's quiet interior, high quality upholstery and positioned seats with adjustable backrests that "permit almost any driver to find an ideal seat-to-wheel-to-pedal relationship", as well as the "best-balanced ride on good roads and bad". The 287 cu in (4.7 L) two-barrel V8 engine with the three-speed automatic achieved 0 to 60 mph in 11.7 seconds, and was the quietest, but least responsive of the group. The test Marlin's standard drum brakes were criticized as inadequate, with the authors recommending the optional disk brakes. 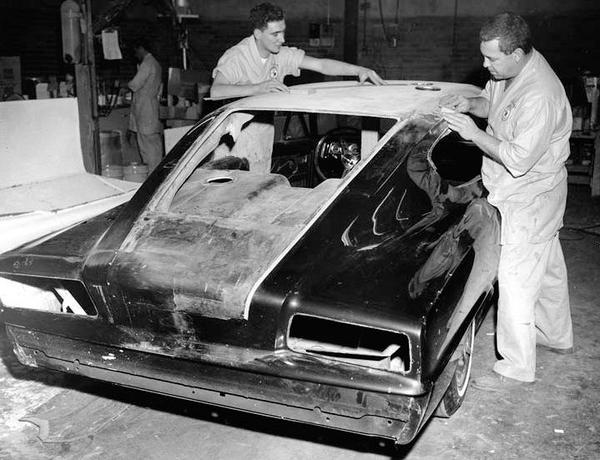