Alfa Romeo was one of the first manufacturers to put a powerful engine in a light-weight car for mainstream production. Giulias were noted for their lively performance among sedans of that era.The car was equipped with a light alloy twin overhead camshaft four-cylinder engine, similar to that of the earlier Giulietta models range. Engine was 1.6-litre (1,570 cc). Various configurations of carburetors and tuning all Giulias 1600s had a 5-speed manual transmission.
The popular more sporty Super version with the twin carburettor 1.6 litre engine had a top speed of 170 km/h (106 mph). 0 to 100 km/h (62 mph) took about 12 seconds. This performance was better than many sports cars of the late 1960s and early 1970s. When leaving the factory all variations of the Giulia originally fitted either Pirelli Cinturato 165HR14 tyres (CA67) or PirelliThe engine bay, cabin and boot were all square shaped. But the grill, the rooflines and details on the bonnet and boot made for an integrated design from bumper to bumper. It was also a car with a particularly low drag coefficient for that era.

Tipo 105.14 was the first model introduced in 1962. 1,570 cc Alfa Romeo Twin Cam engine with single down-draft carburettor, 92 PS (68 kW; 91 hp) at 6500 rpm. The "Ti" nomenclature referred to a class of Italian saloon car racing known as "Turismo Internazionale", and had previously been applied to higher-performance versions of the 1900 and Giulietta saloons in the 1950s. However, for the Giulia saloon, the Ti was at first the only version available, and later, with the introduction of the TI Super and Super, the TI became the base version for the 1,600 cc engine class. Steering column gearchange (the only one in the Giulia range) replaced with floor change for 1964 (Tipo 105.08). Right hand drive available from 1964 with floor change only (Tipo 105.09). Brakes were by drums all around at first. Discs were introduced later, first at the front, and later all around. A brake servo was not fitted at first, but was introduced in later cars. The steering wheel featured the only horn ring ever in the Giulia range. The dashboard with a strip speedo is a notable feature, as is the steering wheel with a horn ring. The Giulia TI was phased out in 1968 and re-introduced as the austerity model 1600 S.

Tipo 105.16 was a special racing model introduced in 1963. Quadrifoglio Verde (green four-leaf clover) stickers on the front wings were a distinguishing feature. Only 501 were made for homologation and today it is very rare and desirable. The 1,570 cc engine was fitted with two double-choke horizontal Weber 45DCOE carburettors for 112 PS (82 kW; 110 hp) at 6500 rpm. The body was lightened and a floor gearchange was fitted as standard, as were alloy wheels of very similar appearance to the standard steel ones of the TI. The TI's instrument cluster with its strip speedometer was replaced with a three-instrument binnacle comprising speedometer, tachometer and a multi-gauge instrument (fuel, water temperature, oil temperature and pressure) - these instruments were similar to those fitted to the contemporary Giulia Sprint and Sprint Speciale coupes and Spider convertibles. The steering wheel was a three-spoke item with centre hornpush, also similar to that of the more sporting models. Braking was by discs all around from the outset, though the first cars lacked a servo which was introduced later. The police cars seen in The Italian Job were of this type. 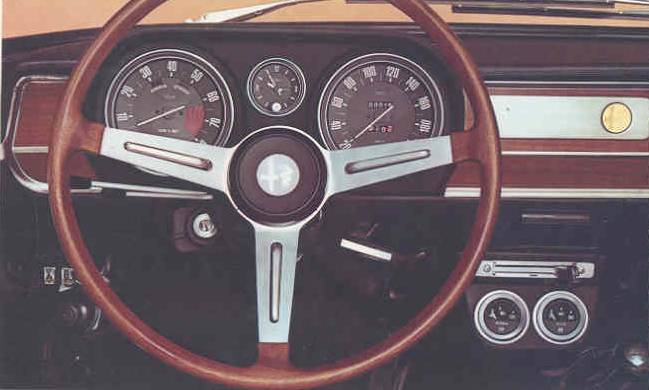 Tipo 105.26 was introduced in 1965. It transferred the technology from the racing TI Super to a road car, to make the most successful Giulia saloon. 1,570 cc engine with two double-choke Weber 40DCOE carburettors for a milder, but torquier tune than the TI Super - 98 PS (72 kW; 97 hp) at 5500 rpm. New dashboard with two large round instruments (speedo and tacho) and clock. Sportier steering wheel with three aluminium spokes and centre horn push, similar to that of the Ti Super, later changed for one with the horn pushes in the spokes. All-around disc brakes with servo were fitted as standard from the outset. The serpent crest of the Sforza family appears in a badge on the C-pillar and is a distinguishing feature of the Super. For 1968, there was a suspension update, including revised geometry and a rear anti-roll bar. The wheels were changed in size from 5J x 15 to 5J x 14, and tires from 155/15 to 165/14. For 1970, updates included dual-circuit brakes, centre-mounted handbrake lever to replace under-dash "umbrella handle", larger external doorhandles, and top-hinged pedals (the latter in left hand drive models only; right hand drive continued with bottom-hinged pedals to the end of production). In 1972, Tipo 105.26 was rationalised into the Giulia 1.3 - Giulia 1.6 range 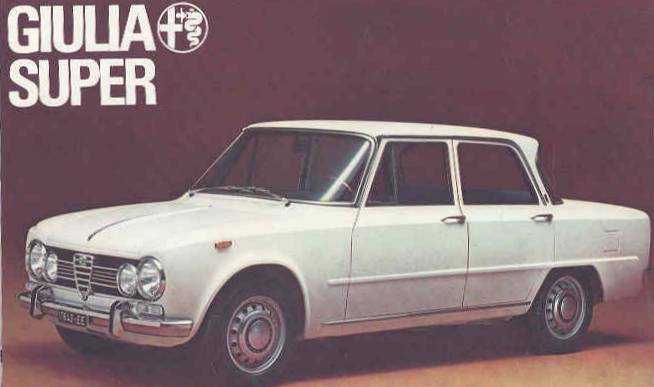 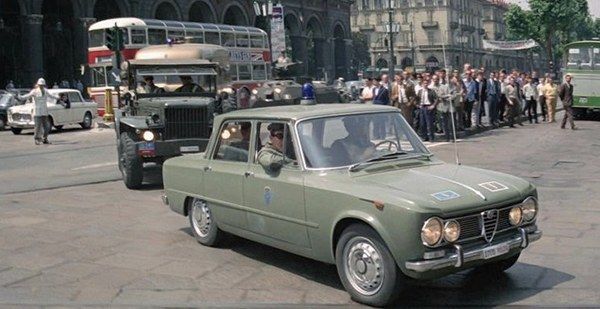