The Alfa Romeo Giulia Spider is an open sports car built by the Italian car manufacturer Alfa Romeo from the 1960s.

The Giulia 1600 Spider "series 101.23" was born as an evolution from the Giulietta Spider "series 101.03". The evolution of the cars in the early 60s led Alfa Romeo to increase the displacement and performance of the Giulietta Spider. The cars are almost identical cosmetically, except for the existence of a fake air intake on the hood of the Giulia needed to house the new engine and the wording "1600" on the rear. There are other differences in the interior, more precisely in the characteristics of the steering wheel, now with three spokes and in the graphics of the instruments, except in the first examples in which they were identical to those of the previous model.

Starting from spring 1964, a Veloce version of this model was also marketed, called the "101.18 series", which mounted a more powerful engine capable of offering greater performance. This latest version represents the maximum performance development of the "Giulietta Spider" and "Giulia Spider" series. 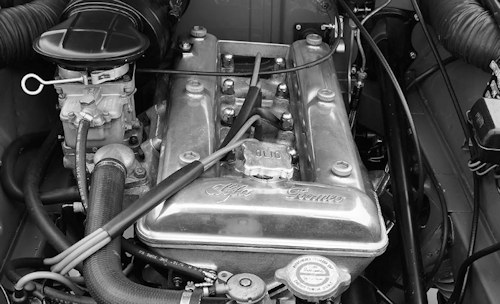 The engine was a four-cylinder in-line front and longitudinal with a displacement of 1570 cc. The bore and stroke were 78mm and 82mm respectively, while the compression ratio was 9:1. The crankcase and cylinder head were made of light alloy. The maximum power delivered by the engine was 92 HP at 6,200 rpm for the "Normale" version, while it reached 112 HP at 6,500 rpm for the "Veloce “The distribution consisted of two valves per cylinder which were driven by a double overhead camshaft. The power supply of the "Normale" version was ensured by a Solex brand carburettor and model 32 PAIA 5, while for the "Veloce" version there were two carburettors. The cooling system was water circulation. The transmission consisted of a five-speed manual synchromesh gearbox which had the final reduction ratio of 8/41. The maximum speed reached by the model was 172 km/h.

In May 1964 the "Veloce" version was presented, which mounted two double-barrel carburettors which increased power to 112 HP at 6,500 rpm and a top speed exceeding 180 km/h. The first 5,600 cars produced had three-shoe drum brakes on all four wheels. Later during 1963 disc-brakes were adopted at the front. The front suspensions were independent and had an anti-roll bar installed, while a rigid axle was present in the rear ones.