Alfa Romeo was one of the first manufacturers to put a powerful engine in a light-weight car for mainstream production. The Giulia weighed about 1,000 kilograms (2,205 lb). The car was equipped with a light alloy twin overhead camshaft four-cylinder engine, similar to that of the earlier Giulietta model’s range.

Various configurations of carburettors and tuning produced power outputs from about 80 to about 110 bhp (55 to 75 kW). Almost all Giulia’s made had a 5-speed manual transmission. Giulia’s were noted for their lively performance among sedans of that era, especially considering the modest engine size.

The front suspension had a particularly sporty pattern wishbones, while the rear axle, while using the classic and somewhat conservative solution, was made more effective by moving the spring and shock absorber attachments from the axle shafts to the longitudinal arms, while maintaining the box. of the aluminium differential and evolving the design of the upper arm to control the lateral shaking. The transmission was a five-speed manual, while the brakes were drum brakes, with the front 3-shoe and finned aluminium drums later replaced by a 4-disc Dunlop system. (Ate since 1967). In 1970 other mechanical changes, the most substantial are the pedal set now pivoted at the top and the handbrake, whose lever is moved from under the dashboard, next to the steering column, to the more conventional lever on the central tunnel in the middle of the front seats.

the differentiated deformation body with a rigid living cell and the bodywork line were also very modern. Thanks to the truncated tail, the lateral grooves at the base of the belt line (which accompanied the air from the nose to the tail) and the low and receding nose, the Giulia had a particularly low aerodynamic penetration coefficient for the time. (0.34) thanks to the use, during its design, of a wind tunnel. Famous was the slogan " Giulia, the car designed by the wind". 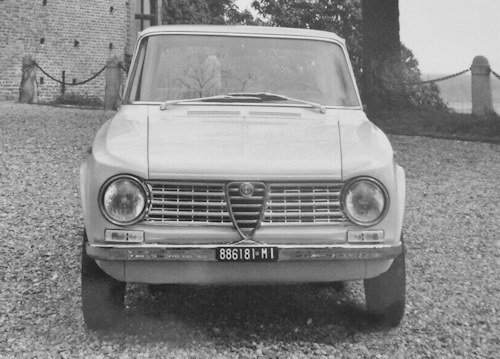 In 1964 the Giulia 1300 entry model was launched , with a 1290 cm³ engine equipped with a double-barrel carburettor that delivered 78 HP DIN (89 SAE) at 6000 rpm, an evolution of the one mounted on the Giulietta TI but it was basically the engine from the 101 series Giulietta Ti, 4-speed gearbox, front with only two headlights (instead of 4 as on the 1600 the 1300 was the only Giulia model not fitted with a five-speed gearbox ), very simplified interiors and reduced accessories equipment the reverse light, the bumper bolts Braking was by discs all around, without a servo at first, later with a servo. Tipo 105.06 made from 1964 to 1970

Tipo 105.39 built from 1965 to 1972. Right hand drive model replaced in 1970 by the 1300 Super. 1,290 cc engine with single down-draft carburettor for 82 PS (60 kW; 81 hp) at 6000 rpm. Unlike the re-deployed 101-series Giulietta engine of the austerity-model 1300, the 1300 Ti motor was a 105 series engine, basically that of the sportier GT1300 Junior coupe with different camshaft timing (but the same camshafts) and induction system. Five-speed gearbox. Three-spoke Bakelite steering wheel with plastic horn push covering the centre and spokes. Dashboard initially with strip speedo like that of the TI. For 1968, updates included a dashboard based on that of the Super, but with a simpler instrument binnacle, still featuring two large round instruments (speedo and tacho) and a separate fuel gauge, and the same suspension, wheel and tire updates applied to the Giulia Super in the same year. For 1970, updates included dual-circuit brakes, centre handbrake, larger external doorhandles and top-hinged pedals (on left hand drive cars only), again as applied to the Super for that year. 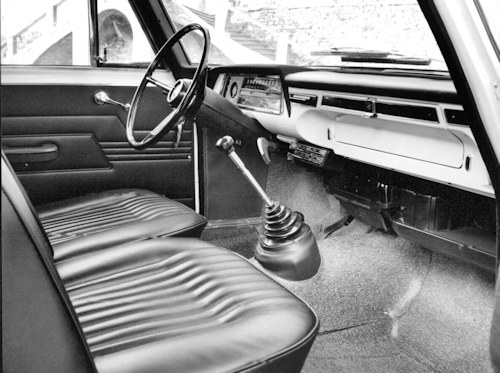 In 1966 the 1300 TI was presented, with an engine of 1290 cm³ always powered by a double vertical Solex 32 PAIA / 7 carburettor, but upgraded to 82 CV DIN (94 SAE) thanks to the higher compression ratio (9: 1 instead of 8.5: 1) and to the larger intake and exhaust manifolds, similar to those of the 1600 TI. From 1600 it also received the gearbox (" The only 1300 with five gears ", advertised the house) and more accurate finishes. Always unchanged the front with only two headlights.In 1967 the 1300 TI also got brake booster, the horizontal instrumentation became circular and a new 3-spoke sports steering wheel. The grille was modified by adopting a simple black mesh with three horizontal chromed strips and the slits at the base of the windshield were changed. The Giulia 1300 base also adopted the same external changes, while remaining without rostrums on the bumpers.

By 1969 the 1300 TI was equipped with a hydraulically operated clutch with diaphragm spring; in 1970 it received a new dual-circuit braking system, the pedals pivoted at the top, the brake adjuster at the rear, the alternator instead of the dynamo and the transition to 14 "rims with 165/80 tires. Accredited with a maximum speed of over 160 km / h, in the Quattroruote test it reached 163,456 km / h

In 1970 the Giulia 1300 Super was born, which took the 1600 version of the same name (but the front remained with single headlights), reaching even higher performance thanks to the 1300 engine powered by 2 double-barrel horizontal carburettors (Weber 40 DCOE 28, Dell 'Orto DHLA 40, Solex C 40 DDH / 4) with 89 HP DIN (103 SAE) already used on the GT Junior since 1966. This had a declared speed of 165 km / h. In 1971 the base 1300 also received the brake booster and the pedal set pivoted at the top but, in the same year, it was removed from the list without ever having undergone any other changes.