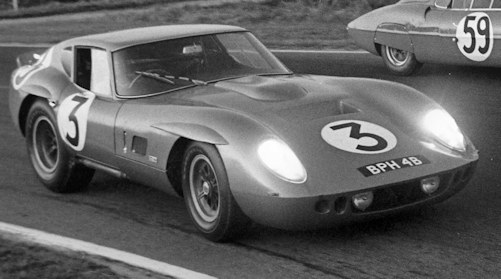 The AC A98 was a competition race coupe type car built in 1964 for race use by the British company AC in Great Britain.

The coupe bodies in sports car racing in the 1960s had much Improved aero-dynamics and more rigidity and strength within the coupe that had more attractive lines than previous but under the skin it was a MkIII Cobra but the A98 body was longer, wider and lower than the
normal Cobra's, with some tubes around cockpit and tail stiffened the chassis. Alan Tumer was responsible for the body. It was designated simply as the A98, this came from the AC drawing office number.

The car had some detail refinements. There was a lower roof line a broad bonnet flanked by a stream line knife edge front nose more prominent wheel arches, with a prominent rear duck tail aerofoil.

It achieved notoriety when national newspapers seized on a story of very high-speed tests on the M1 motorway, On M1 it reached 185 mph/298 kmh. A newspaper reporter from the time put the story on the front pages a UK national newspaper and this is said to of contributed to the introduction of the 70mph UK speed limit for all motorways then on.

At the Le Mans tests it achieved only 155 mph/249 kmh. In the 24-Hour Race crashed in the sixth hour, after a worn rear tyre failed. The car was written off by AC in 1964, stored under a tarpaulin for a number of years then painstakingly rebuilt in the 1970s by Barrie Bird and run then again in 1980s.