The famous AutoCarrier company was founded by engineer John Weller in 1908, taking residence at Thames Ditton, Surrey three years later. In 1913 the company brought out a 10hp four-cylinder light car, and in 1919
Weller introduced what was to become his famous 1991 cc single-overhead-camshaft wet-liner six-cylinder AC engine.

This entered production in 1922 and stayed in the catalogue until 1963 ; over the years development punched its original output of around 35 bhp up to more than 100 bhp.

AC came back to the market after the Second World War with the staid 2-Litre range of cars in 1947, but it was with the Ace sports car of 1953 that the company really made its reputation in the post war years. Casting around for a replacement for the ageing 2-Litre, AC took up a design by John Tojeiro that used a light ladder type tubular frame, all independent transverse leaf spring suspension, and an open two seater alloy body made using English wheeling machines, possibly inspired by the Ferrari Barchetta of the day.

Joining the Ace in 1954 was the Aceca hard top coupé, which had an early form of hatchback rear door but used the same basic timber framed alloy body. 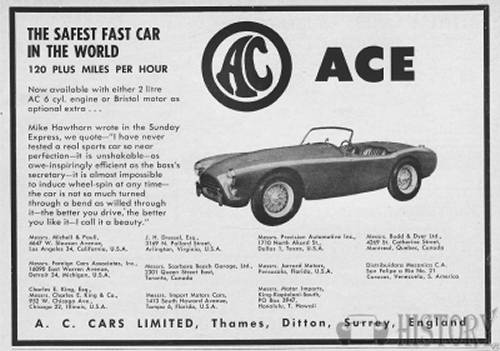 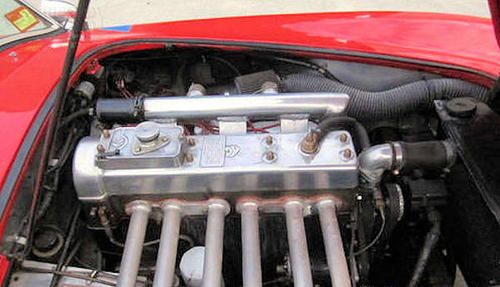 With the engine set well back in the chassis, the Ace handled well and was successful in competition.

AC was under the direction of famous racing driver and entrepreneur Selwyn Francis Edge from 1921 to 1929 and cars were raced, sprinted and hillclimbed widely with great success. The company suffered in the Depression years and was acquired by the Hurlock family in 1930. In 1947 production recommenced after the war with a range of high-performance saloon and three-wheeled invalid cars, and the Petite 350 cc motor-cycle- engined convertible. Then in 1953 the Hurlocks took up a twin-tube-chassis, Ted Whiteaway/jack Turner drove this AC Ace home in an astonishing seventh place overall behind four Ferraris and the victorious Aston Martins at Le Mans in 1959. all-independently suspended sports-car design by John Tojeiro, wearing a body modelled after that of the successful Ferrari 166 Barchetta sports-racing car. This was fitted with the famous AC six-cylinder engine and going into production as the AC Ace in 1954 it became a terrific success; a true 100 mph two- seat sports car in classical mould with the modern lines of a wheel-enclosing bodyshell. The Ace handled very well and achieved a long string of race successes in amateur events as well as proving itself a fine road-going sports car.
AC later adopted more powerful six-cylinder Bristol engines of 2 litres' and 2.2 litres' capacity and derived from the BIM YV 328; eventually they turned to the economy, reliability and adequate power of the 2.6-litre Dagenham Ford engine. Disc brakes became standard on the cars in 1960 and it was upon the pretty little Ace that Carroll Shelby based his Ford V8-engined conversion -the fearsome Shelby American Cobra.

When Bristol ceased building their 6-cylinder engine in 1961, AC's owner, Charles Hurlock, was approached by Carroll Shelby to use a Ford V8 in the Ace chassis, producing the AC Cobra in 1962. Production of the Ace ended the same year. The AC Cobra came in small block and later big block configurations. It was Ford's 289 that powered the winning car in the GT class at Le Mans in June 1964. At the time, the AC Cobra 427 was the fastest "production" car in the world.

AC Automotive, based in Straubenhardt, Germany still builds the AC under the original name. Cars are sold in Germany, France and England with sales in Luxembourg, Holland, Lichtenstein, Switzerland and Belgium slated for the future. Pricing for the standard ACGT model starts at £104,400 before options.

As with the Cobra, some AC Ace replicas have been made such as the Hawk Ace but are much rarer. 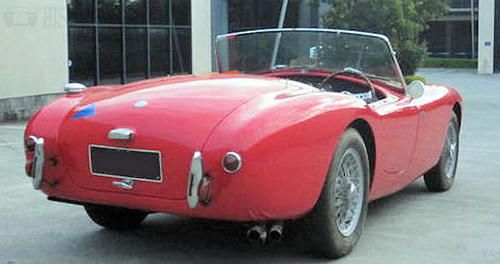