It was developed at BMC as the large-car follow-up to the successful Mini and Austin 1100 under the ADO17 codename. Additional badge-engineered Morris 1800 and Wolseley 18/85 variants were launched, in 1966 and 1967, catering for BMC dealerships selling these marques, and their loyal customers. The 18/85 name had previously been used on the Wolseley 18/85 of 1938 to 1948

The car was unconventional in its appearance in 1964, with its large glasshouse and spacious, minimalist interior including leather, wood, and chrome features plus an unusual instrument display with ribbon speedometer and green indicator light on the end of the indicator stalk. There was a chrome "umbrella handle" handbrake under the dashboard parcel shelf, and the two front seats met in the middle and could be used, on occasion, as a bench seat. Both Alec Issigonis and Pininfarina worked on its exterior. The technology "under the skin" was also unconventional and ahead of its time, including Hydrolastic suspension and an example of inertia-controlled brake proportioning, in the form of a valve which transferred braking force between front and rear axles as a function of sensed deceleration rather than as a function of fluid pressure. The bodyshell was exceptionally stiff with a torsional rigidity of 18032 Nm/degree, this was greater structural rigidity than many modern cars up to the end of the century.

In June 1967, without any fanfare of press releases, a modified version of the 1800 started turning up in domestic market show rooms with repositioned heater controls, a strip of 'walnut veneer' on the fascia and separate bucket seats replacing the former split bench seat at the front. Various other criticisms seem to have been quietly addressed at the same time, including the announcement of more highly geared steering which now needed only 3.75 rather than 4.2 turns between locks, although the actual modification had applied to cars produced since September 1966 (and, in the case of Australian cars, some time before that). This was also the point at which the car received a differently calibrated dipstick, giving rise to rumours that engine problems on some of the early models had resulted from nothing more complicated than the wrong calibration of the dipstick causing the cars to run with the wrong level of engine oil; the manufacturers insisted that the "recalibration" of the dipstick was one of several (unspecified) modifications, and urged owners not to use the new dipsticks with older engines.

In May 1968 a Mark II version was launched. This featured a cheaper and more conventional interior, revised front grilles and other trim, and for the Austin and Morris models the slim, horizontal rear lights were replaced by vertical "fin" lights which gave a family look along with the smaller ADO16 range. The Wolseley retained its unique rear lights. Other changes included a higher second gear and final drive ratio for the manual transmission, and conventional suspension bushes replaced the far superior roller bearings fitted to the Mark I. The compression ratio was increased and maximum power output boosted by 5 bhp to a claimed 86 bhp. The Mark II also had larger wheels

In 1969, the sills and doors from the 1800 (with Mark II exterior handles) were used on the bodyshell of the otherwise new Austin Maxi, apart from that both models have little interchange ability.

Further, less dramatic modifications heralded a Mark III version in 1972. This had another change to the front grille (now a shared style for the Austin and Morris) and interior improvements, including a conventional floor-mounted handbrake.At this point six-cylinder versions were introduced – the Austin 2200, Morris 2200 and Wolseley Six. While 1800 versions of the Austin and Morris were continued, the Wolseley 18/85 was dropped. 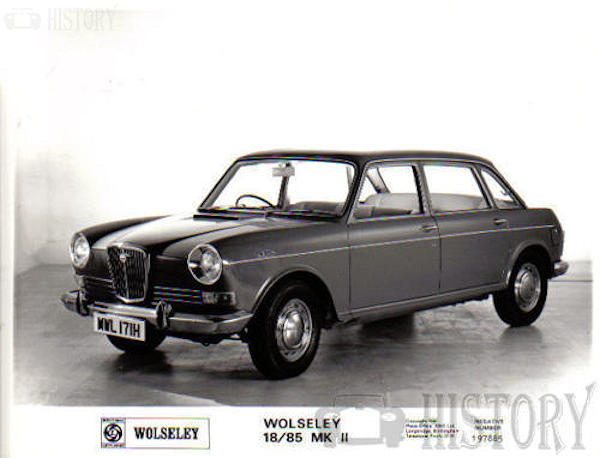