Wolseley Motors Limited was a British motor vehicle manufacturer founded in early 1901 by the Vickers armaments combine in conjunction with Herbert Austin. It initially made a full range topped by large luxury cars and dominated the market in the Edwardian era but the Vickers brothers died in 1915 and 1919. In 1921, expanding rapidly, it manufactured 12,000 cars and still continued to be the biggest motor manufacturer in Britain. Over-expansion led to receivership in 1927 when it was bought from Vickers by William Morris as a personal investment and years later moved into his Morris Motors empire. After the Second World War its products were "badge-engineered" and it went with its sister businesses into BMC, BMH and British Leyland where its name lapsed in 1975.

The Wolseley Tool and Motor Car Company of Adderley Park Birmingham was incorporated in March 1901 with a capital of £40,000 by Vickers, Sons and Maxim to manufacture motor cars and machine tools. The Managing Director was Herbert Austin. The cars and the Wolseley name came from Austin's exploratory venture for The Wolseley Sheep Shearing Machine Company Limited run since the early 1890s by the now 33-year-old Austin. Wolseley's board had decided not to enter the business and the Vickers brothers picked it up. After his five-year contract with The Wolseley Tool and Motor Car Company ended Austin would found The Austin Motor Company Limited.

Austin had been searching for other products for WSSMC because sale of sheep shearing machinery was a highly seasonal trade. About 1895–96 he became interested in engines and automobiles. During the winter of 1895–96 working in his own time at nights and weekends he made his own version of a design by Léon Bollée that he had seen in Paris. Later he found that another British group had bought the rights and he had to come up with a design of his own having persuaded the directors of WSSMC to invest in the necessary machinery..

In 1897 Austin's second Wolseley car, the Wolseley Autocar No. 1 was revealed. It was a three-wheeled design (one front, two rear) featuring independent rear suspension, mid-engine and back to back seating for two adults. It was not successful and although advertised for sale, none were sold. The third Wolseley car, the four-wheeled Wolseley "Voiturette" followed in 1899. A further four-wheeled car was made in 1900. The 1901 Wolseley Gasoline Carriage featured a steering wheel instead of a tiller. The first Wolseley cars sold to the public were based on the "Voiturette", but production did not get under way until 1901, by which time the board of WSSMC had lost interest in the nascent motor industry.

Thomas and Albert Vickers, directors of Vickers and Maxim Britain's largest armaments manufacturer had much earlier decided to enter the industry at the right moment and impressed by Austin's achievements at WSSMC they took on his enterprise. When Austin's five-year contract ended in 1906 they had made more than 1,500 cars, Wolseley was the largest British motor manufacturer and Austin's reputation was made. 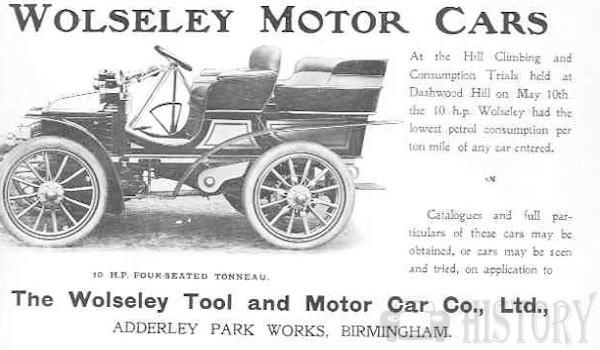 The Wolseley range from 1901 to 1905. Engines were horizontal which kept the centre of gravity low. Cylinders were cast individually and arranged either singly, in a pair or in two pairs which were horizontally opposed. The crankshaft lay across the car allowing a simple belt or chain-drive to the rear axle:

Vickers replaced Austin by promoting Wolseley's London sales manager, John Davenport Siddeley to general manager. Vickers had earlier built for him some of his Siddeley cars at their Crayford Kent factory. During 1905 they purchased the goodwill and patent rights of his Siddeley car. Siddeley promptly replaced Austin's horizontal engines with the now conventional upright engines. Under Siddeley Wolseley maintained the sales lead left to him by Austin but, now run from London not (Austin's base) Birmingham the whole business now failed to cover overheads. The board closed the Crayford Kent works, dropping production of taxicabs and commercial vehicles and moved the whole operation back to Birmingham. After some heated discussions Siddeley resigned in the spring of 1909 and was to go on to manage the Deasy Motor Company.Ernest Hopwood was appointed managing director in August 1909.

After 1911 the name on the cars was again just Wolseley. 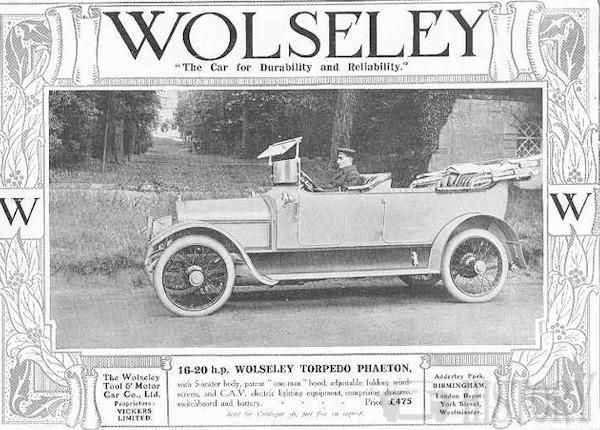 The Scottish Horse Mounted Brigade's Field Ambulance developed an operating car, designed by Colonel H. Wade in 1914, which enclosed an operating table, sterilisers, full kit of instruments and surgical equipment, wire netting, rope, axes and electric lighting in a Wolseley car chassis. This operating car was employed during the Gallipoli Campaign at Suvla, in the Libyan Desert (during the Senussi Campaign) and at Kantara in Egypt, before being attached to the Desert Mounted Corps Operating Unit in 1917. Subsequently taking part in the Southern Palestine Offensive, which culminated in the Capture of Jerusalem.

In 1918, Wolseley began a joint venture in Tokyo, with Ishikawajiama Ship Building and Engineering. The first Japanese-built Wolseley car rolled off the line in 1922. After World War II the Japan venture is reorganized, renaming itself Isuzu Motors in 1949.

Thomas Vickers died in 1915 and Albert Vickers in 1919 both then in their eighties. During the war Wolseley's manufacturing capacity rapidly developed. Postwar the Vickers Directors decided to borrow and further expand Wolseley's works and to consolidate their motor-car interests in one company. Wolseley accordingly purchased from within the Vickers group: Electric and Ordnance Accessories Company Limited, the Motor-Car (Stellite Car) Ordnance Department and the Timken Bearing Department and announced Wolseley's future car programme would be:

Examples of all these models were exhibited at the Olympia Show in November 1919.

In 1919 Wolseley also took over the Ward End, Birmingham munitions factory from Vickers and purchased a site for a new showroom and offices in London's Piccadilly by the Ritz Hotel. More than £252,000 was spent on the magnificent new building, Wolseley House, more than double their profits for 1919 when rewarding government contracts were still running. Those contracts ended. In 1920 they reported a loss of £83,000. The following years showed even greater losses and in 1924 the annual loss reached £364,000.

Ernest Hopwood had been appointed Managing Director in August 1909 following Siddeley's departure. He resigned due to ill-health late in 1919. A J McCormack who had been joint MD with Hopwood since 1911 resigned in November 1923 and was replaced by a committee of management. Then at the end of October 1926 it was disclosed Sir Gilbert Garnsey and T W Horton had been appointed joint receivers and managers and the company was bankrupt "to the tune of £2 million". It was described as "one of the most spectacular failures in the early history of the motor industry". 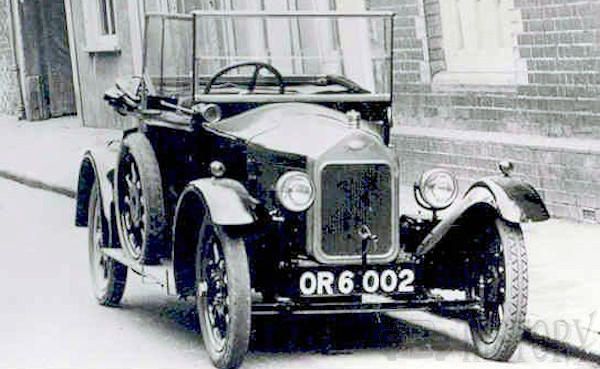 Wolseley's business was purchased personally by William Morris, later Viscount Nuffield for £730,000 in February 1927 using his own money.Other bidders included General Motors and the Austin Motor Company. Herbert Austin, the founder, was said to have been very distressed he was unable to buy it. Morris incorporated a new company, Wolseley Motors (1927) Limited, later permitted to remove the (1927), and consolidated its production at the sprawling Ward End Works in Birmingham. Morris transferred Wolseley to his Morris Motors Limited in 1935 and Wolseley models soon became based on Morris designs. It joined Morris, MG and later Riley/Autovia in what was later promoted as the Nuffield Organisation

After the war Wolseley left Adderley Park, Morris and Wolseley production was consolidated at Cowley, and badge engineering took hold. The first post-war Wolseleys, the similar 4/50 and 6/80 models, were based on the Morris Oxford MO but given a more traditional radiator grille.

Following the merger of Austin and Morris that created the British Motor Corporation (BMC), Wolseleys shared with MG and Riley common bodies and chassis, namely the 4/44 (later 15/50) and 6/90, which were closely related to the MG Magnette ZA/ZB and the Riley Pathfinder/Two-point-Six respectively.

In 1957 the Wolseley 1500 was based on the planned successor to the Morris Minor, sharing a bodyshell with the Riley One-Point-Five. The next year, the Wolseley 15/60 debuted the new mid-sized BMC saloon design penned by Pinin Farina. It was followed by similar vehicles from five marques within the year.

The Wolseley Hornet was based on the Austin and Morris Mini with a booted body style which was shared with Riley as the Elf. The 1500 was replaced with the Wolseley 1100 (BMC ADO16) in 1965, which became the Wolseley 1300 two years later. Finally, a version of the Austin 1800 was launched in 1967 as the Wolseley 18/85.

After the merger of BMC and Leyland to form British Leyland in 1969 the Riley marque, long overlapping with Wolseley, was retired. Wolseley continued in diminished form with the Wolseley Six of 1972, a variant of the Austin 2200, a six-cylinder version of the Austin 1800. It was finally killed off just three years later in favour of the Wolseley variant of the wedge-shaped 18–22 series saloon, which was never even given an individual model name, being badged just "Wolseley", and sold only for seven months until that range was renamed as the Princess. This change thus spelled the end of the Wolseley marque after 74 years.

As of 2012 the Wolseley marque is owned by SAIC Motor, having been acquired by its subsidiary Nanjing Automobile following the break-up of the MG Rover Group. The Wolseley Sheep Shearing Machinery Company continued trading and is now Wolseley plc.