The VW EA211 is a gasoline engine series of Volkswagen AG with three and four cylinders. The engine generation has been used in various vehicles of the Volkswagen Group since 2011 and is the successor to the VW EA111 series . The common features of all engines of the EA 211 series include four-valve technology , the drive of the two overhead camshafts ( DOHC valve control ) via a maintenance-free timing belt and the exhaust manifold integrated in the cylinder head .

The cylinder crankcase consists of an aluminum alloy , the liners of gray cast iron . The conversion from cast iron to aluminum crankcase alone made it possible to reduce the weight of the 1.4-liter engine by 16 kg compared to its predecessor (EA111).  The cylinder head is made of AlSi10Mg (Cu) alloy using the aluminum chill casting process. Another common feature of all engines is the cylinder spacing of 82 mm.

All variants have four valves per cylinder, which are operated via roller rocker arms of the two overhead camshafts ( DOHC valve control ). The camshafts are driven by the crankshaft via a maintenance-free toothed belt . All engines have stepless adjustment of intake camshaft by means of hydraulic phaser. The 1.4 TSI engines from 103 kW also have an adjustment of the exhaust camshaft.

The weaker variants of the 1.0-liter three-cylinder engine have intake manifold injection and no charge . Therefore, they are also referred to by Volkswagen as "MPI" engines (Multipoint Injection).

The more powerful versions of the three-cylinder and all four-cylinder, however, have a direct injection and a turbocharger with single-scroll turbine. Volkswagen uses the brand name " TSI " for these engines . Depending on the variant, different turbochargers are used, which differ mainly in the dimensions of the turbine and compressor wheels. The material of the turbocharger is designed for exhaust gas temperatures up to 950 ° C. For better cooling, the turbocharger is integrated into the cooling circuit of the intercooler. The wastegate flap is actuated by an electric charge pressure controller with integrated position transmitter.

All engines have a three-way catalytic converter . From 2017 onwards, some variants will also use an Ottopartikelfilter (OPF). It is a closed particle filter. Unlike a diesel particulate filter , however, this requires no active regeneration due to the higher exhaust gas temperatures of the gasoline engine.

There is also a low-temperature cooling circuit for indirect intercooling. In this cycle, the cooling of the exhaust manifold and the turbocharger is involved. The low temperature circuit has an electrically driven coolant pump, which, for example, the turbocharger can be cooled even after parking the vehicle. 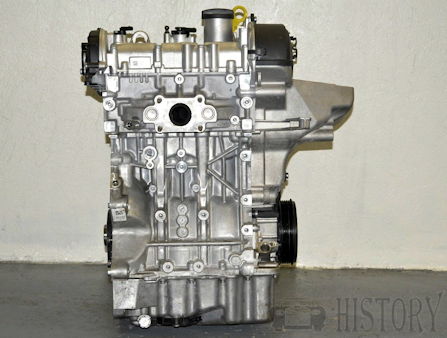 The displacement of the three-cylinder in - line engine is 999 cc with a bore of 74.5 mm and a stroke of 76.4 mm, with a cylinder spacing of 82 mm. The compression is 10.5. The crankcase is made by AlSi9Cu3 alloy diecast aluminum .In the 70 kW variant full valves of high-alloy steel are used, the performance-enhanced variants from 81 kW obtain sodium cooled exhaust valves.