With VW EA189 a number of is TDI diesel engines of Volkswagen AG  which was introduced in 2007 and introduced to the series in 2008 and has come to be used in different car models to the Group, 2015. The abbreviation EA stands for "development order"; Predecessor was the series VW EA188 , which was known as " pump-nozzle -TDI". The EA189 engines hit the headlines worldwide in 2015 as part of the VW emissions scandal ; They were also referred to by the press as a "cheating diesel engine".

The EA189 engines were manufactured in the VW Salzgitter plant , in Polkowice ( VW Motor Polska Sp. Z oo ) and in the Hungarian engine plant Győr ( Audi Hungaria Motor Kft. ). first engine of this series was the 2.0 TDI, the first passenger car diesel engine according to EPA emissions standards of the United States , Tier 2 Bin 5 , was approved.  In 2009 complements the motor range by a smaller 1.6 TDI version, the 1.2 TDI three-cylinder engine appeared afterwards. With the model year 2012 received the 2.0 TDI engine for the Passatan upgrade for the US market. The engine got a new turbocharger, balance shafts and a selective catalytic reduction (SCR) for the exhaust aftertreatment.

The base engine is a 2.0-liter in- line four-cylinder engine that operates on the diesel process . He has a cast iron engine block and a four-valve cylinder head . Bore and stroke are 81.0 × 95.5 mm, the cubic capacity is given as 1968 cm 3 . Unlike the predecessor engine, it is no longer pump injectorinjection that is used, but common rail injection , which operates at a variable pressure of 230 to 1800 bar. The engine is charged with a VTG turbocharger and has charge air cooling. The exhaust gas purification system consists of low-temperature exhaust gas recirculation ,Diesel particulate filter and oxidation catalyst . The US version from 2009 is a NO x storage catalytic converter provided.

The cylinder head of the engine is a cross-flow aluminum cylinder head with two single and two exhaust valves per cylinder actuated by two timing belt driven overhead camshafts (DOHC) via roller rocker arms with hydraulic lash adjusters . For synchronizing the camshafts , the camshaft drive has a spur gear toothing with backlash compensation. The cylinder head contains the piezo injectors , which are equipped with clampsare attached. The camshaft timing belt also drives the common rail pump and the coolant pump; A V-belt drives the air conditioning compressor and the alternator.

As is common in modern diesel engines for swirl and mass flow control of the intake air, the EA189 has two differently designed intake ports for each cylinder: a tangential and a spiral duct. The spiral channel creates an air turbulence, while the tangential channel is designed as a filling channel. In order to favor the air turbulence, the tangential duct is closed in the partial load range with a swirl flap.  a is used to control the swirl flap actuator motor which moves the swirl valves via a push rod and the engine control unit is controlled. The actual position of the swirl flaps is the engine control unit via a potentiometerreturned. At low speeds, the swirl flaps are closed, at an engine speed of about 3000 min -1 , they are fully open. At engine start and in emergency operation, the swirl flaps are also fully open.

In the spring of 2017, Volkswagen pleaded guilty to fraud in the US by not adequately cleaning exhaust emissions outside test benches by using a defeat device. The allegations of illegal software manipulation of electronic previously raised in the US motor control , using cut-off device to circumvent the emission regulations, based in the specific case of the 2.0 TDI engine, which is about sold there from 2009 to 2015 482,000 times has been. The values ​​determined by the Environmental Protection Agency in real driving exceeded the limit values ​​for NO x up to 40 times.

Among the three of the West Virginia University vehicles tested, a 2.0-TDI engine was  ( VW Jetta VI ) and 2,0-TDI engine with SCR catalyst ( VW Passat (NMS) ), both model year 2012, each with a power of 103  kW at 4200 min -1 . The NO x values ​​of the vehicle equipped with nitrogen oxide storage catalyst were between 15 and 35 times that of the vehicle with SCR catalyst, and between 5 and 20 times the limit in real traffic.

According to a long-time VW employee in the department of engine technology, the use of fraud software is said to have been discussed in a larger circle in November 2006, because the "emission standards could not be met" and only then "a clean diesel engine" are presented could. With the testing techniques existing at that time the fraud could not be discovered.

In March 2018, numerous details about the software update became known. When "Update" the programming of the engine control unit is changed, but sometimes parts of the engine are replaced. Volkswagen states that the engine will continue to maintain the specified rated power after the "update" and the torque curve will not change, and that the noise behavior and fuel consumption will not be adversely affected. Volkswagen continues to examine whether concepts for the engine control of the EA 288 could be adopted for the EA 189. On the software side, the pilot injection is not changed, but the main injection takes place earlier and less fuel is injected. The injection pressure in the partial load range would be increased. The reduced by the modified main injection torque development will be compensated by a post-injection, which also reduces the soot particle emissions. Through these measures, the exhaust gas recirculation rate can be increased, causing the combustion temperature to decrease, resulting in less nitrogen oxides. According to Volkswagen, the measures would not wear the injectors of the engine stronger. This is partly doubted.Changing the programming of the engine control unit would result in more soot particles during combustion in the EA 189, which would lead to earlier clogging of the soot particle filter. Volkswagen states that the particulate filter would last at least 180,000 km if correct engine oil was used. An additional soot particulate filter increases the exhaust backpressure which can cause damage to the engine turbocharger. 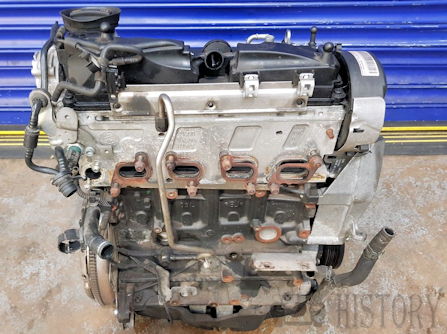