The Volvo C30 is a compact car produced by the Swedish manufacturer Volvo Cars between 2006 and 2013, available only as a three-door hatchback (or shooting-brake). It is powered by inline-four and straight-five engines. The car is largely a hatchback version of the contemporary Volvo S40/V50/C70 range, and uses the same Ford C1 (or Volvo P1) platform. It is being marketed as a premium hatchback or a sports coupe specially designed for first-time Volvo buyers and the youth market. Production is expected to be 65,000 units a year, 75% for sale in the European market.

In late 2006, the C30 was launched in Europe. Engines choices range from a 1.6L inline-4 (petrol or diesel) to a 2.5L inline-5 turbo (2.4L diesel). 2009 added the choices of a 6-speed PowerShift dual-clutch automatic with the 2.0 L petrol and diesel engines, a 1.8L E85 flex-fuel engine, and 1.6L "DRIVe" diesel engines with improved efficiency and optional start/stop capability.

Trim lines include SE and SE Lux in the UK, and Kinetic, Momentum, and Summum (from fewest to most features) in most other European nations. The R-Design package adds interior and exterior accessories including aluminum inlays on the dashboard, R-Design emblems on the steering wheel, seats and floor mats, a rear spoiler and body kit.

In Canada, the 2.4i was offered until 2011, while the T5 remains available. In the United States, the only engine available has been the T5. For 2008, the US C30 debuted with two trim lines, Version 1.0 and Version 2.0. R-Design was added later in the model year, featuring unique badges and interior trim. Since 2009, the US C30 has been offered in T5 or R-Design trim. In addition, the Polestar performance option (developed in partnership between Volvo Car Corporation and Polestar Racing) became available for the 2012 model year for several Volvo models, including the C30 T5. The software modification to the engine control computer increased output from 227 hp to 250 hp without a reduction in U.S. Environmental Protection Agency fuel economy ratings.

The ReCharge concept is a plug-in hybrid electric version of C30, developed by Volvo's California development center. It was unveiled at the 2007 Frankfurt Motor Show. It features a 4-cylinder 1.6L flex-fuel engine and an electric motor on each wheel. It has an estimated battery range of 100 kilometres (62 mi). The batteries have 3 hours of full recharge time. The car has a top speed of 160 km/h (99 mph). Volvo plans to sell a production plug-in hybrid C30 in Europe in 2012.

The C30 continues Volvo's marketing strategy to put safety as a primary concern. This is demonstrated through some recently developed safety features, including a method of overcoming the "blind spots" in the driver's view to the rear through a system known as BLIS (Blind Spot Information System).

The Insurance Institute for Highway Safety (IIHS) awarded the Volvo C30 their Top Safety Pick award. The C30 was granted its highest rating of "good" in front, side, rear and roof strength tests and has Electronic Stability Control as standard equipment to receive the award.

The Volvo C30 has a patented front and rear structure using four different grades of steel to absorb and redistribute impact energy around the body of the coupe. Volvo's Whiplash Protection System and Side Impact Protection System with side airbags and Inflatable Curtain are also standard. The seat belts have pretensioners to protect the occupants against unexpected accidents.

The car also uses Volvo's Intelligent Driver Information System (IDIS) which continuously monitors the car's preemptive systems such as steering wheel angle, pedal depressions, and overall factors that help the vehicle's computer to decide if the driver is busy or distracted merging or turning, and will then accordingly delay certain data or alerts that are unimportant.

The C30 has been criticized because in an effort to make it more responsive in curves it has become less reliable on ice or snow where the rear end can more easily lose its grip compared to other Volvo models.

Optional sport chassis, available in all models except 1.6D DRIVe, includes lower steering ratio, giving 10% faster response to steering wheel input. Spring stiffness has been increased by no less than 30% in order to increase the car's poise in enthusiastic driving.

The updated vehicles were unveiled in 2009 Frankfurt Motor Show.

Beginning in 2011 model year, D3 and D4 engine options were added to the product line. Other changes include new body colour (Flamenco Red), Cars with Volvo On Call have the option of activating the cabin heater remotely via SMS text messaging. 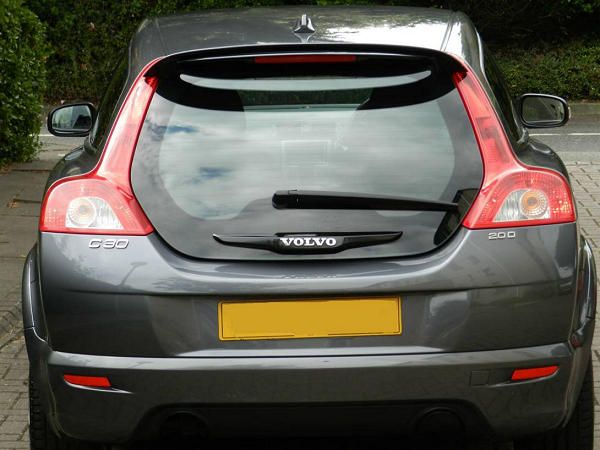