Volvo introduced the first generation C70 at the 1996 Paris Motor Show, following a European introduction as a 1997 model, and later as a 1998 model in North America — with 2.0 (sold mostly in Italy), a low-pressure turbo (2.4L) and a high-pressure turbo (2.0L and 2.3L), 5-cylinder, turbocharged petrol engines and manual and automatic transmissions. Peter Horbury designed the exterior and Mexican designer Jose Diaz de la Vega led the interior design team.

The C70 broke Volvo's decades-long styling tradition of boxy, rectilinear designs. According to Peter Horbury, Volvo's design chief from 1991 to 2002, with the C70, Volvo threw away the box, but "kept the toy inside!""Our vision was to design a convertible that would meet the needs of a family of four looking for comfortable blue-sky motoring in a vehicle also providing stylish looks, performance and faultless driving and road-holding."

In a development program of 30 months and working with a Volvo 850-derived platform, Britain’s TWR (Tom Walkinshaw Racing) co-designed the car's basic design and suspension tuning with Volvo. Manufacture of the C70 was a joint venture until the two companies experienced disputes that threatened to interrupt production; TWR did not contribute to the second generation C70.

The cloth convertible top, initially available in four colors, was fully automatic, operated by a single, dashboard-mounted button. The top stored automatically under an integral rigid tonneau cover in a system pioneered in modern convertibles with the fourth generation Mercedes SL.

The C70 was introduced to the press in a signature color (saffron pearl metallic) and for the debut marketing, the 1997 movie The Saint featured a C70 — recalling the notable connection of the Volvo P1800 and the TV series from the early 1960s, The Saint with Roger Moore as Simon Templar. 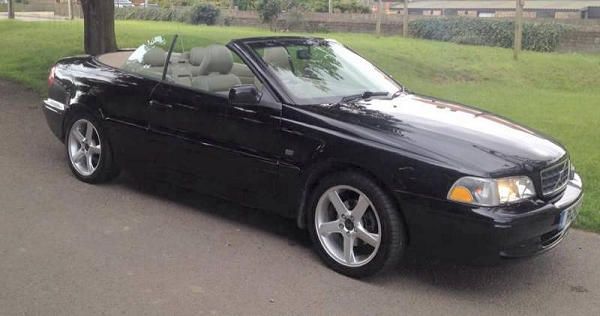