The VW Passat B8 (Type 3G) is a mid-size vehicle from Volkswagen, which was presented to the public at the Paris Motor Show 2014.

The vehicle has been available for order since July 2014, with delivery beginning in November 2014. It takes the place of the VW Passat B7. For the first time, the Passat is built on the Modularen transverse modular system, which allows the inside to be expanded at a constant outside length. The Passat B8 was also named European Car of the Year 2015. Volkswagen is facelifting the Passat B8 for model year 2020 (starting in June 2019). There are new features and a rebranding of the equipment options in addition to the external alterations to the body.

In addition to the standard equipment Trendline, the upmarket equipment version Comfortline, and the luxury equipment Highline are available, as is the case with most modern VW vehicles. Furthermore, the GTE equipment standard for the Passat GTE plug-in hybrid and the off-road variant Alltrack for the Passat Variant. With the model year's makeover,the naming of the trim levels was revised. The basic equipment is now simply Passat or Passat Variant , Business refers to the upscale and Elegance the luxury variant.

The VW Passat B8 offers a variety of driver assistance systems such as Adaptive Cruise Control , Pedestrian Detection , Blind Spot Assist and Lane Keeping Assist . In addition, some systems were first introduced in a passenger car. Including the Emergency Assist , which takes over the control of the vehicle completely. In a medical emergency with concomitant inactivity of the driver, the vehicle continues on its own and asks the driver by beeps and short brake jerks to take over the steering. If this does not react, the car brakes to a stop and activates the hazard warning lights.

Also a novelty is the Trailer Assist, which supports the reverse drive with trailer. With the aid of the joystick for rearview mirror adjustment, the driver can specify the direction the trailer should take. The necessary steering movements are calculated automatically by the system.

Furthermore, the parking assistant has been further developed. The Passat was the first car in the world to independently park independently in parking spaces . 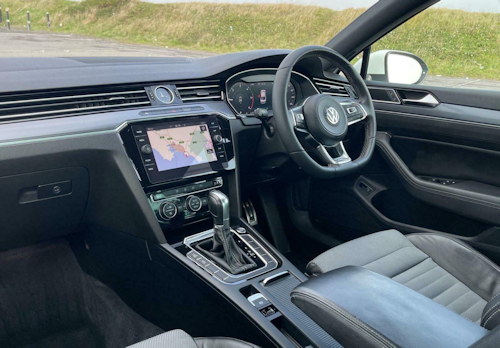 The engine range has been revised. In the case of the diesel engines, the performance could be increased compared to the predecessors while maintaining the same displacement. New are powerful variants of the 2.0 TDI with twin turbo and SCR catalytic converter . As petrol engine, two variants of the 1.4 TSI are initially available for the model launch. At the end of 2018, gasoline engines were replaced by variants with particulate filters. With the GTE version, the Passat is also available for the first time as a plug-in hybrid .

In China , three versions of the Passat B8 are sold. The estate version corresponds to the European version, but is sold as VW Variant or VW Alltrack . The sedan is available as in the previous model exclusively in a ten centimeters longer version. Since the model name "Passat" is used there for the North American Passat generation , the long version is sold as VW Magotan .

There is also a revised version of the Passat GTE and the Passat Alltrack .

In the Passat GTE, a plug-in hybrid drive is used, which is comparable to that of the VW Golf GTE . Externally, the Passat GTE differs by the lettering on the back, the trim strip on the front and the C-shaped daytime running lights only slightly from purely powered by internal combustion engine Passat models. The connection for the charging cable is located at the front, but unlike the Golf GTE not behind the central brand logo, but behind another flap in the front grille on the driver's side. 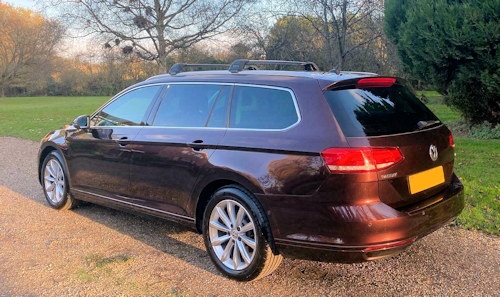