The VW K 70 was the first Volkswagen with a front - row engine and water cooling and the first mass - produced Volkswagen with front wheel drive. It was developed by NSU . It came on the market in September 1970 and marked the beginning of a new vehicle technology at Volkswagen, which had previously built only vehicles with air-cooled rear engines.

After a decision by the executive board of NSU Motorenwerke AG, on 12 January 1965, under the leadership of NSU development chief Ewald Praxl and the later head of design department Claus Luthe, the development of a sedan of the middle class with notchback and four doors and a combination version with three doors, which should complement the larger NSU Ro 80 .

On July 30, 1965, the design for the station wagon was finished (contrary to the original planning with four doors) and was listed in the factory files under the working title "Type X I". In view of a foreseeable trend shift, NSU manufactured in October 1965 a so-called Fastback body based on the NSU type 110 and NSU 1200 with the name Studie 77 I on. At the same time a successor of the type 77, the "type X II", developed with two doors, front engine and front wheel drive. Parallel to this development, the NSU designers worked on the new model "Type X III" or K 70 (where "K" for reciprocating opposed to "Ro" for rotary piston in NSU Ro 80 with Wankel engine stood).

The presentation of the K 70 was planned for March 1969 on the occasion of the International Motor Show in Geneva . Shortly before, however, was stuck in economic difficulties NSU AG the Volkswagen subsidiary Audi slammed, which led to the rejection of the international motor press eagerly awaited presentation of the NSU K 70 in Geneva, although at that time for two and a half years at the development and pre-series production of the K 70 had been worked. The rejection of the presentation led to assumptions, such as the one coming from the K70 due to internal competition from the VW 411 and Audi 100 Group modelsnot on the market, or he does not come as NSU, but later as VW K 70 - which ultimately came true.

Although the NSU AG had risen in the VW subsidiary Audi, Volkswagen took on the fully developed K 70 - because Audi had with the much-sold Audi 100 on a model located in the same vehicle class. In September 1970, the vehicle was officially presented after minor changes under the name VW K 70 and built in specially built for the Volkswagen plant Salzgitter . The K 70 was not available as a station wagon, so as not to hurt the sale of the in-house VW 411 Estate. Only a few prototypes had been built.

The K 70 (VW internal designation: Type 48) set new standards in the car range of the Volkswagen factory. So was the space of this exclusively 4-door sedan not only compared to the VW Beetle or VW 1600thextremely generous, but it was also larger than the approximately equally expensive, but about 7 cm longer VW 411th There was a large trunk in the rear (volume 585 l, measured with cuboids of 200 × 100 × 50 mm), the all-round view was very good because of the large windows and the low window line (the window height is over 40% of the door height) and parking maneuvers were easy, because thanks to the relatively high seating position, the body borders were also good to miss. The heating of the water-cooled K 70 was far more effective than with VW models with air-cooled rear engine.

The objective form, designed by Claus Luthe, corresponded to the ideal of the early 1970s; unlike many vehicles of the late 1960s, Luthe did not use bulky shapes and rich chrome "Baroque style" jewelery, replacing its sleek and understated elegance with a timeless look.

The technical concept of the water-cooled front-engine with front-wheel drive prevailed at VW a few years later (from 1973 on the VW Passat and from 1974 on the VW Golf I ).

The K 70 had - as already Citroën, DKW and the NSU Ro 80 - inside front disc brakes on the differential housing. Although this reduced the unsprung masses , it made accessibility difficult during maintenance. Rear drum brakes were installed with a radial ribbing for heat dissipation. The passive safety of the car had a twice angled steering column (universal joints)  as well as a body with deformable crumple zones at the bow and stern and enhanced security cabin; the tank was in the protected area below the passenger compartment in front of the rear axle. To avoid opening while driving, the bonnet was hinged at the front. Seat belts cost extra, but the threaded bushings required for retrofitting were standard on all five seats - front and rear outside for three-point seat belts , rear center for a lap belt.

So that the car was not too top-heavy, the longitudinally mounted engine was sitting right inclined above the differential, behind the gearbox, so that almost the entire drive was exactly above the front axle. The coupling could be change without dismantling of the motor or gearbox.

In addition, the chassis of the K 70 - which is similar to that of the NSU Ro 80 - praised as very progressive: front had the K 70 MacPherson struts and triangular wishbones , rear a trailing arm axle with subframe, on all wheels telescopic shock absorbers , also on the rear axle combined with the springs, In addition came (until 1973) stabilizers on both axles, from 1973 only on the front axle. With this chassis construction a good roadholding was achieved. Responding to the then demand for comfort in vehicles of the middle class and upper middle class, the suspension of the K 70 was kept very soft and was made possible by long suspension travel, which led in curves to a fairly strong lateral inclination for today's conditions. The steering wheel radius of the front axle was zero. 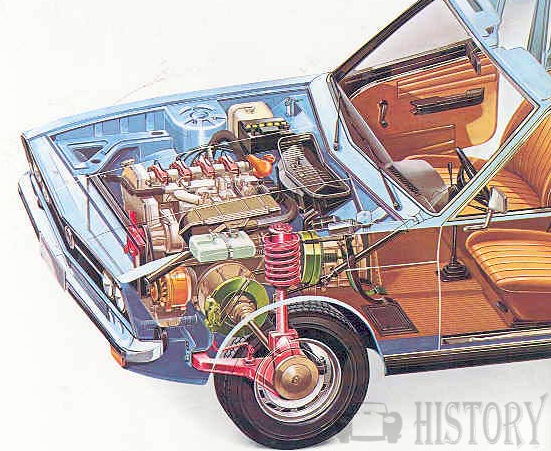 There was the K 70 1.6-liter engines and a power of 75 HP (55 kW) or 90 hp (66 kW) and from 1973 (K 70 S / LS) with 1.8 liter displacement and 100 PS (74 kW). They were derived from the engine of the NSU 1200 , had a five-bearing crankshaft and an overhead camshaft with chain drive. The valves hung V-shaped in the hemispherical combustion chamber and were operated via rocker arms. With the end of production of the K 70, the production of these engines was discontinued - for Passat, Scirocco, Golf and Polo less expensive and cheaper engines were taken over by Audi (such as the VW EA827 ) and newly developed.

The advertising leaflets from VW at that time indicate consumption (always measured at a constant speed of 110 km / h over 100 km and half payload [here: 230 kg payload including driver]): the prospectus from 1970 for both engine versions (75 and 90 hp) 10.2 liters, the prospectus of August 1973 shows 11.0 liters (100 hp) and 11.2 liters (75 hp) - the higher value for the 75-hp engine results from changes to the carburetor, the nozzle assembly in the Course of time has been changed several times. In the radio and television broadcast in the 1970s auto test series with Rainer Günzler, the testers determined an average consumption of the 90-horsepower engine of 10.4 l / 100 km at a constant speed of 110 km / h (highway), in city traffic were 11 , 8 liters, on the highway, however, determined 9.8 liters.

The front end of the body has been revised several times to reduce fuel consumption (see also below in the model maintenance section), which, however, hardly reduced the high air resistance.

From K70 70 211,127 vehicles were manufactured from August 1970 to May 1975. The sales figures were relatively low over all model years. This was partly because the K 70 was very modern compared to the other VW models and it was hard to find in the classic VW clientele, the rear-engine vehicles and the typical design appreciated. In addition, it was also relatively difficult for the VW dealerships to promote both the modern K 70 and the now outdated, but still very popular other models such as Beetle, Type 3 or the VW 411 equally objective, so that the K 70 - which until 1973 was the only model with a forward-looking technical concept at VW - often and completely wrongly fell behind. Due to the low sales of the K 70, but also due to its special status in production (since it had been developed at NSU, there were hardly any common parts with other vehicles of the VW Group) was the production unprofitable. It also caused its "two-story" engine-transmission unit, the three-shaft transmission and the elaborate rearSchräglenkerachse high production costs. Although there were considerations for a facelift, of which the motoring magazine MOT gave an impression in 1972, but this was not pursued. There was thus no direct successor model, since the Passat was the successor of the VW 1600 (VW Type 3); In addition, the VW Passat came in 1973 on the market. Thus, the K 70 increased indirectly in the upper middle class , since the Passat was marketed as a new mid-range vehicle and was equipped at least in the basic version much simpler than the K 70.

With the VW Santana and later the VW Phaeton Volkswagen tried to position another sedan above the middle class. In view of the low quantities and the problem of corrosion , the K 70 has virtually disappeared from today's street scene and has become a rare vehicle even in the classic car scene.

The models with the more powerful engines - 90 or 100 hp - had a tachometer in the instrument cluster .

Even the basic version was in view of the still manageable purchase price for then conditions above average well equipped and offered better basic equipment than some other rival model of the time: Wisch-washing-automatic for the windscreen, doors on the inside completely clad and front with one storage bag, two interior lights, glove box lighting (until autumn 1971), warning lights for starter pull and handbrake (the latter also warning light for low brake fluid level), electric timer, 2 ashtrays in the rear doors, lighting of the cigarette lighter and heating and ventilation regulation, Instrument lighting infinitely adjustable via rotary knob,Clothes hooks on the B-pillars and in addition to the handles above the side windows (this only until autumn 1971).

In the L variant were added as standard: front seats with reclining seat adjustment, storage pockets on the front seat backs, seat covers elaborate (velor), interior floor with carpet instead of needle felt, chrome trim on the door linings, rear bench seat with fold-out armrest in the middle, both sun visors with make-up mirror, lock in the glove compartment lock, trip odometer, trunk lighting, bumpers with rubber pad (from autumn 1971), round halogen twin headlights (from August 1972) and lockable fuel filler cap (from 1973).

In addition, the equipment details of the L variant were ordered separately for the basic version.

In addition, a number of accessories were available for the K 70, such as adhesive side protection trim or various storage brackets for the space between the shift lever and transmission tunnel.

Despite the relatively short construction period of the K 70, there were a whole series of mostly smaller model care measures. Those who are also externally visible also help to distinguish the individual model years from each other: