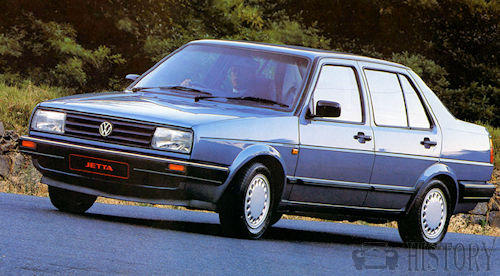 The Mark 2 series is the longest running Jetta so far. Introduced to Europe in early 1984 and to North America in 1985.

The second generation Jetta proved to be a sales success for Volkswagen. The car secured the title of best-selling European car in North America, Farmers Journal COTY 1991 and outsold the similar Golf by two-to-one in that market. Based on the all new second generation Golf platform, the car was larger, heavier, and could seat five people instead of four as in the Mark 1. Exterior dimensions increased in all directions. Overall length was up by 100 millimetres (3.9 in), the wheelbase grew 66 millimetres (2.6 in), and the width went up 53 millimetres (2.1 in). The suspension setup was basically unchanged from the first generation, although refined slightly, for example by the inclusion of a separate subframe for mounting the front control arms to help noise isolation, as well as improved rubber mountings for all components. Aerodynamics improved considerably, with a drag coefficient of 0.36 With a 470-litre (16.6 ft3) luggage compartment, the trunk had grown nearly as large as some full-sized American sedans.Interior room was also increased 14%, which changed the EPA class from sub-compact to compact.

Cars built in Germany were assembled in a brand new (at the time) plant at Wolfsburg in Assembly Hall 54. The plant was heavily robotised in an effort to make build quality more consistent. New innovations on the second generation included an optional trip computer (referred to as the MFA, German Multi-Funktions-Anzeige), as well as silicone dampened engine and transmission mounts to reduce noise, vibration, and harshness levels. In 1988, a more advanced fully electronic fuel injection system became available. This arrangement is known as the Digifant Engine Management system.

Like the Mark 1, the second generation was offered as a two-door or four-door saloon/sedan. External changes throughout the series' run were few: the front-quarter windows were eliminated in 1988 (along with a grille and door trim change), and larger body-colored bumpers and lower side skirts were added from 1990.

In 2007, Volkswagen of America held a contest to find the diesel powered Volkswagen with the highest distance traveled on the original engine. The winning car was a 1986 Jetta Turbodiesel found in Blue Rock, Ohio which had 562,000 miles (904,000 km). A local dealer verified the odometer reading. Notable on this particular car was that it also had the original muffler despite being located in an area subject to road salt in the winter.

In a crash test conducted by the National Highway Traffic Safety Administration, the Jetta received three out of five stars for both driver and passenger protection in a 56 km/h (35 mph) frontal crash test. The Highway Loss Data Institute (part of the Insurance Institute for Highway Safety) found the injury and collision losses for the Jetta to be among the best of the small 4-door sedan category. It was topped only by the Golf. Earlier models had the dubious distinction of having an especially high rate of radio theft. Apparently, the mounting of the radio made it especially easy to remove quickly. To correct the problem, Volkswagen introduced a theft protection system to all cars. When the power supply to the radio was removed, it automatically went into "safe" mode. When plugged back in, it would not work unless a secret code was entered. This made it essentially useless to thieves, although provided a hassle to customers who misplaced their code card. The dealership maintains a database of codes, and can replace a lost code if the radio serial number is provided.

The Jetta did not differ greatly from its European twin (at least as much as the Golf did), besides requirements such as bumpers, glass, etc. Also, North American models in general have a narrower range of specification available. For example, most models had things like a bigger engine, full console, door panel pockets, velour seating, and, later on, power steering, height adjustable steering column, and tachometer, standard. They also lacked some higher level options of European variants. The Jetta was perceived as slightly upmarket from the Golf. The level of features always was a step above (standard passive restraint in 1988, standard power steering in 1990, 14-inch wheels available for most years, etc.).

Canadian spec models were even better equipped. Generally, the Canadian base models received the same level of options as an American GL, and the same with the GL and Carat. Other Canadian specification differences were diesel engines (both naturally aspirated and Turbo) available for all years (in the US, there was no diesel for 1988, and only the n/a for 1989 and 1990), a 2-door model for 1992 (it was dropped in the US), the early Carat model (which had heated velour sport seats, a GLi engine, and optional automatic), and color and trim differences. 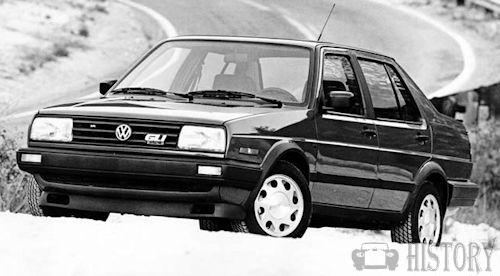 The car received generally positive reviews, with critics praising the car's excellent handling, as well as a roomier interior compared to the last generation.Stiff shifting manual transmissions were a downside, and braking worked reasonably well although some brake fade was evident in the lower trim lines equipped with solid discs in front and drums in back. A number of reviews noted that the ride was stiff and busy, even though it did have good control typical of German cars. Despite additional sound insulation, road noise was evident especially on coarse pavement. In top sport trim (sometimes called the GLI or GTX), some reviewers noted the car was a less expensive alternative to a BMW or Audi.The sport trim added larger wheels, a stiffer suspension, and closer ratios on the manual transmission. Later models of the Mark 2 GLI had a 16 valve dual cam engine, originally a 1.8-litre engine first was used in the mid 1987 GLI and beginning in 1990 with the newer Mark 2 body style an upgrade to a 2.0-litre 16 valve (in North America).

The IRVW 3 ("Integrated Research Volkswagen") was a 1983-1984 research study based on the not yet released Jetta II. In appearance it looked like nothing more than a slightly sporting Jetta, but it was packed with highly refined technology for its time. It was essentially a feasibility study for newly developed technology such as anti-lock brakes and electric power steering. A number of functions were computer controlled, such as the overdrive gear for its four-speed manual gearbox. The engine was the familiar 1.8 litre inline-four from the Golf GTi, but here equipped with a Roots-type supercharger for a max power of 175–180 PS (129–132 kW). Top speed was 212 km/h (132 mph). The IRVW 3 also had a pneumatic suspension which automatically lowered the car when the speed surpassed 120 km/h (75 mph).

Besides the Volkswagen production base in Germany, this generation was produced in a number of other countries, including China, Nigeria, Mexico, South Africa, USA, and the former Yugoslavia. The Mark 2 Jetta went on to become the first Volkswagen model produced in China by Volkswagen Group China's second joint venture partner FAW-Volkswagen. Production began on 5 December 1991. Initially sold as complete knock down (CKD) kits, local manufacturing has gradually taken over in the form of Semi-Knocked Down kits in 1992, and full local production in 1995.

The car has had three revisions since its inception in China, the first facelift borrowed front-end styling from the fourth generation Volkswagen Passat in 1997. Production started in August 1998, and its name was changed to the Jetta König. The second facelift was revealed in March 2004 (taking influences from Volkswagen's most expensive model, the Phaeton). On 29 July 2007, it was announced that First Automotive Works expanded its production of the Mark 2 Jetta by building a new assembly plant in Chengdu, Sichuan Province in Southwest China.The expansion was driven by the high demand for the car, a desire to expand in the western part of the country, as well as the long term goal of FAW to develop new derivatives from the car's platform independently of Volkswagen.

The third facelift was released in March 2010, which took some inspirations from stylings of Volkswagen models of the newest generation A diesel version of the Jetta is also on sale, but a large proportion are in service as taxis in many cities in China, rather than as private cars. In March 2013, the Jetta Pionier was replaced by the new Volkswagen Jetta Night. 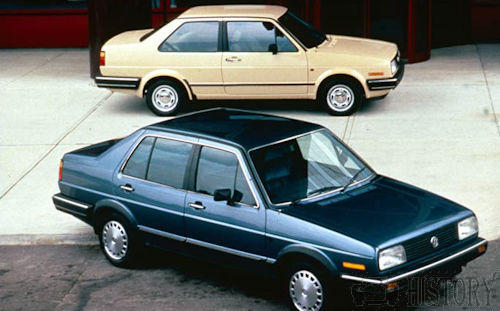