The Volkswagen Type 2 (T3) was the third generation of the Volkswagen Transporter and was marketed under various nameplates worldwide – including as the Transporter or Caravelle in Europe, Microbus in South Africa, and as the Vanagon in North and South America.

Larger and heavier than its predecessor, the T2, – and with a more squared and less rounded styling – the T3 was manufactured in Germany from 1979 until 1992. South African production of the T3 continued, for that market only, until 2002. The T3 was the final generation of rear-engined Volkswagens.

Following the T2, the T2/3 - Transporter 2 Generation 3 (and known as the T3's) - initially featured air-cooled and subsequently water-cooled engines. Versions produced in South Africa from 1990 until 2002 featured an Audi five-cylinder engine.

Volkswagen marketed the Westfalia camper variant throughout the T3 production, with features including a pop up roof, refrigerator, sink, and stove.

Examples built between 1980 and 1985 featured round headlights and chrome-plated steel bumpers with plastic end-caps. Air-cooled models (1980 to mid-1983) lack the lower grill above the radiator of the water-cooled models, except on models with factory air conditioning. 1986 model year vehicles received revisions including a tachometer, more fabric choices, redesigned air conditioner, larger water-cooled engine with a more advanced engine management system, and redesigned transmissions including an optional syncro four-wheel drive. Exterior changes include rectangular headlights (on selected models) and different paint options. Alloy wheels, larger and squarer plastic bumpers with trim along the rocker panels were optional, and standard equipment on Wolfsburg Edition vans. For 1990 and 1991 model years, a "Carat" trim level was available which included all available options (except Westfalia conversion).

All 1980 and some 1981 models had eight welded-in metal slats covering the engine ventilation passages behind the rear windows. Later models had black plastic 16-slat covers that slotted in at the top and screwed down at the bottom.

During the 1980s, the U.S. Army and Air Force in Germany used T3's as administrative (non-tactical) vehicles. In military use, the vehicle's nomenclature was "Light Truck, Commercial".

Porsche has created a version called B32 in a limited edition. The van was equipped with 3.2 liter Carrera engine and was originally developed to support Porsche 959 involvement in Paris-Dakar race.

Oettinger has developed a six-cylinder version called WBX6. The engine is derived from the "Wasserboxer" engine and has many common parts with it. The development of the engine was originally contracted to Oettinger by VW. Oettinger bought the rights when VW decided not to use it.

With the internal combustion engine and transaxle mounted very low in the back, the T3 had much larger disc brakes in the front, and drums in the rear. Axle weight is very nearly equal upon both the front and back ends of the vehicle. Unlike the T2 before it, the T3 was available with amenities such as power steering, air conditioning, power door locks, electrically controlled and heated mirrors, lighted vanity mirrors, and a light above the glove box (most of which were essentially standard equipment in later models).

The automatic was a standard hydraulic three-speed unit, the same 090/010 unit as used in Audis of the era. These featured a cast aluminium alloy case for the transmission section, and a cast iron case for the final drive section.

The automatic features a 1.0 ratio top gear, while the manual features a 0.85 top gear.

The oil filler tube for the engine is located behind the flip-down license plate door. Most early vans had a twist-on/off gas cap right on the outside just under and behind the passenger side door. A locking cap was optional. The spare tyre lies in a tray under the very front of the van (as the engine is in the back), just below the radiator.

Because of the engine placement, a T3 has nearly equal 50/50 weight distribution fore and aft.

The Wasserboxer featured an aluminum case, cylinder heads, and pistons, and a forged steel crankshaft. The Wasserboxer, as with all VW boxer engines has a gear-driven valvetrain. It also featured Heron, or "bowl-in-piston" type combustion chambers where the combustion takes place within the piston area, and not in the cylinder head.

The switch to water-cooling for the boxer engines was made mid-year in 1983. The previous generation T2, currently produced in Brazil, has been switched to water-cooled engines since 2005.

The six-cylinder engine as used in the VW Oettinger WBX6 was developed by VW in conjunction with Oettinger for use in the T3. When VW abandoned the project Oettinger took the design, refined it and put it on the market. As such the six-cylinder shares many parts with the four-cylinder Wasserboxer.

In contrast to the standard flat-four gasoline engines, all diesel engine options were of an inline configuration.

US Vanagon model variations included the Vanagon, featuring vinyl seats and a spartan interior; the Vanagon L with optional cloth seats, more upscale interior panels, and an optional dashboard blower; the Vanagon GL with more equipment, and the Westfalia pop-top camper Vanagons, which came in two versions. A Camper version with integrated kitchen, complete with refrigerator (which ran on Propane, 110V or 12V), a two burner stove, and stainless steel sink with onboard water supply. A fold down rear bench seat converted to a bed and the pop-top included a fold out bed; these models could sleep four adults. A 'Weekender ' version which lacked the refrigerator, propane stove, and sink of the full 'camper' versions offered an optional removable cabinet with a 12 volt cooler and self-contained sink.

Syncros models were manufactured in limited numbers from 1985 through 1992, with the four-wheel drive system added by Steyr-Daimler-Puch Works in Graz, Austria. With a short wheelbase and 48/52 front/rear weight distribution.

The T3 was replaced by the T4 (Eurovan) in the US market in 1993 (1992 saw no Volkswagen bus imported into the U.S. market, save custom campers sold by companies other than VW). Top-of-the-line Wolfsburg Edition Westfalia Campers, which had all options, were at the top of the price range. In addition to the camper models, a Carat trim level was available for 1990 and 1991 model years. This model included all options available for the Transporter configuration. Some models had optional aluminum alloy wheels. 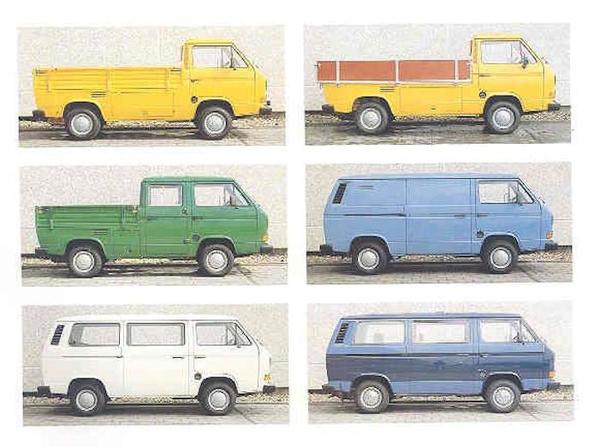 Production of the T3 continued in South Africa until June 2002, when, due to the economies of scale, Volkswagen SA were obliged to discontinue production after parts supply started to become an issue. The South African T3s post 1991 had a face-lift which included modified front door sheet metal, bigger side windows behind the B pillars, different rear grilles in the D pillars, a fully padded dashboard featuring a smaller glove box and updated vacuum-powered ventilation controls operated by round knobs rather than slide levers and a grille and headlight combination not found anywhere else in the world. The lower grille ran the full width of the vehicle and incorporated the indicator lenses, which were changed from amber to smoked lenses from 1999 onwards. The fuse box was also relocated to the right hand side of the steering column. These later South African T3s became known as Big Window T3s due to their larger side windows. The 2.1 Wasserboxer engines were replaced with 5-cylinder Audi engines in the "Microbus" and "Caravelle", while a VW 1.8 inline 4-cylinder engine was used in the "Kombi" and "Van" models. The 5-cylinder T3's came out initially with a 2.5 litre fuel injected engine in 1991, but this was replaced in 1995 with a 2.6 litre with an improved fuel injection system, 5-speed transmission and two styles of 15" alloy wheels as standard (Rhein or Starburst) along with larger ventilated front disc brakes. A slightly lower spec 2.3 five cylinder fuel-injected model was introduced along with the 2.6 but was equipped with a 4-speed transmission and modified wrap-around steel bumpers. Near the end of production, a top of the range Caravelle 2.6i known as the "Exclusiv" incorporated two rear facing seats in place of the centre bench seat, a fridge and a folding table in the back of the vehicle and Carat 2 alloy wheels. A Microbus 2.6i with similar features, but with Rhein alloy wheels was known as the "Activ". The last T3 off the production line in Uitenhage on Friday June 16, 2002 was a gold-coloured Microbus 2.6i which Volkswagen SA retained for their AutoPavilion, Place of Cars and Legends, which first opened its doors in 2004. Unfortunately this vehicle was later written off in a transporter roll-over accident in November 2006, after returning from a display in Cape Town.