The original Volkswagen Passat was launched in 1973. The body types offered originally were two- and four-door fastback sedans and identically profiled three- and five-door versions. Externally all four shared a modern design, styled by the Italian designer Giorgetto Giugiaro. In essence, the first Passat was a fastback version of the mechanically identical Audi 80 sedan, introduced a year earlier. A five-door station wagon/estate was introduced in 1974. In Europe, the Passat was equipped with either two rectangular, two round 7-inch units, or quadruple round 5.5-inch headlights depending on specification.

The Passat was one of the most modern European family cars at the time, and was intended as a replacement for the aging Volkswagen Type 3 and Type 4. The Passat was Wheels magazine's Car of the Year for 1974 and its sister model Audi 80 was nominated car of the year by the European motor press a year earlier. The platform was named B1.

The Passat originally used the four-cylinder OHC 1.3 l (55 PS/40 kW; 54 hp) and 1.5 l (with either 75 PS/55 kW; 74 hp or 85 PS/63 kW; 84 hp) petrol engines also used in the Audi 80—longitudinally mounted with front-wheel drive, in Audi tradition, with either a four-speed manual transmission or three-speed automatic. It had a MacPherson strut front suspension with a solid axle/coil spring setup at the rear.

The whole range received a facelift in 1977 (launched 1978 outside Europe), featuring an interior upgrade and subtly revised styling including repositioned indicators and depending on model, either four round or two rectangular headlights.

B1 in North America

In North America, the car was called the Volkswagen Dasher. The three- and five-door hatchback and a station wagon model were launched in North America for and during the 1974 model year. Sole available engine was a carburetted 1.5 l inline-four developing 75 hp (56 kW) (or 70 hp (52 kW) in 1975), supplanted from model year 1976 by a Bosch fuel-injected 1.6 l four 78 hp (58 kW). North American cars were equipped with single DOT standard headlights.

In 1978 the Dasher received a facelift along the lines of the European Passat, with quad sealed beam headlights and big polyurethane covered bumpers. The trim was also upgraded and the ride softened. 1979 saw the introduction of the 1.5 l diesel engine, which produced just 48 PS (35 kW) in the 1130 kg (2500 lb) car. 0–100 km/h time for the Diesel was 19.4 seconds, 6.2 seconds slower than the gasoline (petrol) engine. All gasoline engines were dropped for North America in 1981 in preparation for the next generation.

In Brazil, the Passat B1 was produced from 1974 until 1988, originally with the 1.5-liter gasoline engine. A 1.6 was added with the 1976 introduction of the sportier TS 1.6 version, which received twin headlights. Since the Audi 80 was not marketed in Brazil, its front-end treatment was applied to the Passat in a facelift for 1979. Originally only available as a two or four-door fastback sedan, a three-door hatchback option was added in July 1976.During its long life cycle many improvements from the B2 platform were introduced, like its 1.6 and 1.8-liter engines and a five-speed gearbox. A second, Brazil-specific face-lift in 1983 brought quadruple rectangular headlights.The sporting TS 1.6 was later upgraded with a bigger engine, as the Passat GTS 1.8 Pointer. For export only Volkswagen's 1.6-liter diesel four-cylinder engine was also installed.

As a part of an overall export push by Volkswagen do Brasil (VWB), 170,000 "Passat LSE" were also built between 1983 and 1988 specifically for export to Iraq. These cars received various upgrades to suit Iraqi conditions, such as a protection plate for the engine, a stronger radiator, and standard air conditioning, and were bartered for oil which was transferred to Petrobras. As Petrobras' oil reserves grew larger than necessary, VWB found themselves with a large stock of Iraqi-spec cars that they were unable to export. In July 1986 local sales of these leftovers began. Despite being fitted with the old 72 PS 1.6-liter MD270 engine and a four-speed transmission rather than the more powerful AP600 and five-speed unit used in current Brazilian cars, the LSE was an unexpected success in the Brazilian market.

The Passat represented a break with Volkswagen do Brasil's rear-engined, air-cooled traditions. It did well on introduction, being a much more modern car than the rest of the VWB lineup as well as the Ford Corcel, its closest competitor. After the introduction of the B2 Santana in 1984, however, the Passat began to show its age. The Passat continued to be produced until 1988, by which time a total of 676,819 Passats had been built in Brazil. 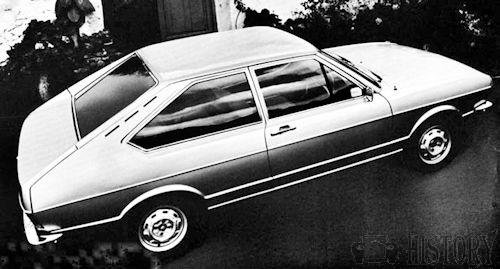