The second generation Volkswagen Passat was launched in 1981. The platform, named B2, was slightly longer and the car's updated styling was instantly recognisable as a Passat, with the most obvious difference being the rectangular headlights. In addition to the Passat hatchbacks and Variants (estate/wagon), there was also a conventional three-box saloon, which until the 1985 facelift was sold as the Volkswagen Santana in Europe. In North America, the Passat/Santana was sold as the Volkswagen Quantum, available in three-door hatchback, four-door sedan, and a wagon model, but the five-door hatchback was never sold there and the three-door hatchback was dropped after less than two years. The four-wheel drive Syncro version was introduced in October 1984, initially only with the more powerful two-litre five-cylinder engine.

The Santana was also produced in China, Brazil, Mexico (as the Corsar, from 1984 and 1988) and Argentina (as the Carat between 1987 and 1991). In Brazil, the Santana station wagon was sold as the Quantum. The Passat saloon and estate were produced in South Africa for their local market until 1987. As of 2010[update] the B2 Santana is still in production in China.

Like the previous generation, the B2 Passat was mainly sold with four-cylinder petrol and diesel engines. Unlike its predecessor, however, top-of the line versions received five-cylinder Audi or VW engines of 1.9–2.2 litres. In addition to four- and five-speed manuals and three-speed automatic gearboxes, the Passat/Santana was also available with the VW concern's interesting 4+E transmission. This, also called the "Formel E" had a particularly high top gear, which combined with a freewheeling mechanism to provide better gas mileage. An automatic stop/start was also available in some markets. The four-wheel drive system used in the Passat Variant Syncro shared the mechanics of the Audi 80 quattro rather than the Volkswagen Golf Syncro. The Syncro's bottomplate was almost entirely different, requiring a transmission tunnel, a relocated gas tank, and no spare tire well (to make room for the complex rear axle assembly). Only the more popular estate was deemed worthy of reengineering. Syncro was also available in the North American market, only with the five-cylinder engine.

In 1985 the range received a slight facelift, consisting of new, larger bumpers, interior retouches, a new front grille and new taillights on the hatchback versions. The three-door hatchback was discontinued while the Santana nameplate was dropped in Europe. The saloon's front end was now the same as the hatchback and estate. The North American version, still known as the Quantum, gained European-style composite headlamps.

On March 31, 1988 production ended (although Syncro models continued in production until June) with 3,345,248 built in Germany. World production totals amount to at least 4.5 million units. 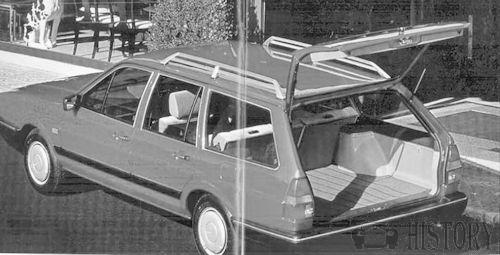