The Volkswagen Eos is a four-seat retractable hardtop coupé convertible, introduced in 2006 as the successor to the Volkswagen Golf Cabriolet. The Eos is Volkswagen's first production coupe since the last Corrado in 1995.

The name Eos is derived from Eos, the Greek goddess of the dawn.

The Eos incorporates into its five-piece folding roof an integrated and independently sliding glass sunroof — making the Eos the only retractable hardtop of this kind. The roof folds automatically into the trunk in 25 seconds, thereby reducing trunk space from 10.5 to 6.6 cubic feet (300 to 190 L)

The roof was designed and is built by OASys, a subsidiary of Webasto Germany.

Prior to production, the Eos was shown as the Concept C concept car at the 2004 Geneva Motor Show — designed by a team headed by Peter Schreyer, Head of Volkswagen Design in Wolfsburg.Other sources attribute the design of the Eos specifically to Slovenian Robert Lešnik.

The production Eos, produced at the AutoEuropa plant in Portugal, was presented in September 2005 at the Frankfurt Motor Show, with the North American introduction at the Los Angeles Auto Show in January, 2006.

Unlike the Cabrio, which was a convertible version of the Golf hatchback, the Eos is a standalone model with all-new body panels, although it shares the platform and components from the Volkswagen Golf (MK5). The wheelbase matches the Golf Mk5 and Jetta.

A facelifted Volkswagen Eos appeared in late 2010, and will go on sale as a 2012 model outside Europe.

The Volkswagen concern has no plans to build a top performance version of the Eos (called Eos R), as they did not want its cabriolet to be powered by a high-revving engine, and as the recent top-performing versions have V6s which while powerful are considered too heavy for a sporty offshoot. However, there are rumors that there is an in-house Eos R in the works, and it is speculated that it's likely to get a tuned 3.6 litre VR6 engine and 4motion all-wheel drive system instead of front-wheel drive. 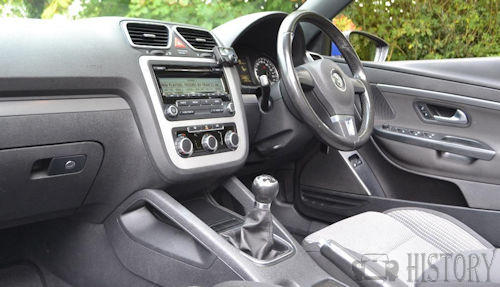 All vehicles are front-wheel drive only.

The Eos is produced in Volkswagen's AutoEuropa factory in Palmela, Portugal. Although production started in late 2005, first deliveries were delayed due to a wind noise problem. 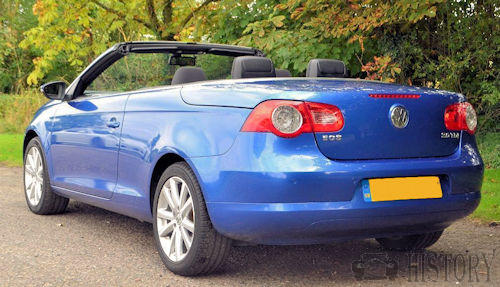