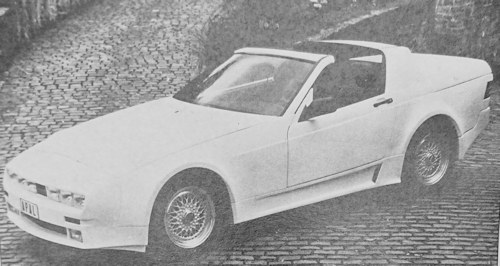 ASC, better known as the American Sunroof Company, or perhaps the Automobile Specialty Company, or even the Aeromotive Systems Company.

American Specialty Cars was an automobile supplier and concept car design of highly engineered and designed roof systems to convert fixed head cars, body systems and other specialty-vehicle systems for the world’s automakers.

The company was headquartered in Warren, Michigan, in the United States and was one of several coach convertible builders. It was founded by Heinz Prechter in Los Angeles, California as the American Sunroof Company in 1965. The company soon expanded its operations into Detroit by 1967.

In the industry, ASC became well known for converting standard coupe automobiles into convertibles. The company also engineers convertible tops for automakers to build themselves.

Developed as a design study as opposed to a production model, the ASC Corvette Geneve (so named after it's debut at the Geneva Salon in 1987) integrates advanced design elements with a dose of practicality into America's favourite sports car. Working with GM design staff, ASC took a standard Corvette chassis, and have created an all-new body shape with flowing contours and sculptured lower body detailing with air extrac-
arches.

Among the aerodynamic features are flush door handles and side marker lights, whilst the smoother front end incorporates a blended-in air dam. At the rear, there are twin spoilers, the upper one continuing the profile line, which have built-in LED brake lights. Inside, ASC have added deeply contoured black leather seats, deep pile carpeting and black leather trim. The neat cambria cloth hood can be stowed under a flush tonneau
cover which is designed not to interupt the smooth lines of this conversion.With a Top speed of 120 mph from the V8 engine  with 243 BHP.

divisions of the same parent company, who produce the ASC McLaren, an American idea of the European sports car. The design concept was by Peter Muscat and features all manner of 'European ised items such as, 'ground effects styling','Eurostyle' rear spoiler with integral high mount stoplight, 'Eurostyle' cambria cloth convertible top with, predictably, European style stitching.

The interior is well appointed with just about every conceivable luxury including stereo speakered head rests. A 5-litre (European for liter!) V8 conveys it's power through either a 5-speed manual or 4-speed automatic transmission and on to the ASC designed alloy wheels, shod with225/50VR-16 tyres. All in all, an interesting and attractive interpretation of the sportscar.