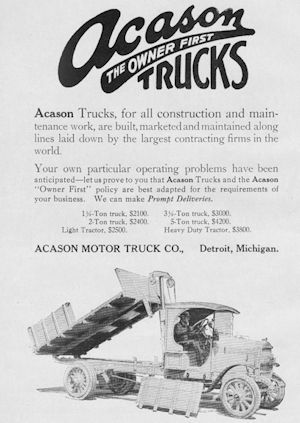 Acason Motor Truck Company was a manufacturer of commercial vehicles from the United States .The brand name was Acason .

The company was founded in Detroit , Michigan in 1915 . In the same year the production of trucks began . Utilizing semi-elliptic leaf springs and Timken worm-drive rear axle, most Acason stakeside trucks were sold as 2 and 3 1/2-tonners.Power came from four-cylinder Waukesha engines of between 22 and 40hp.