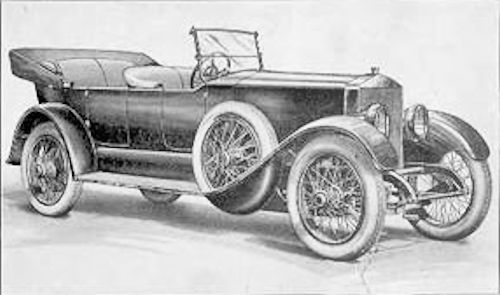 The American & British Manufacturing Corporation (A & BMC) was an American defense and industrial company that manufactured guns for the US Navy , steam engines and motor vehicles. Trucks and Avant-Trains were as American & British or A & B.

From 1919 to 1922, the luxury cars Porter Model 45 and Porter Model 46 were manufactured, which were among the strongest and most expensive in the US market.The Porter Knight was not a model of the American & British Manufacturing Corporation .

The company was founded on May 23, 1902 as the "American Machine & Ordnance Co." in New York and renamed the "American & British Manufacturing Co." on November 28. The activities of the company was the production of firearms , ammunition , steam engines , Glühkopfmotoren , automobile engines , marine engines and repairs of all kinds indicated. To the company owned the operations of listed Corliss Steam Engine Works in Providence ( Rhode Iceland ) and American Ordnance Works in Bridgeport . A main owner of the company was theInternational Power Co. The Corliss Steam Engine Company was a well known manufacturer of Balancing - steam engines after by George Henry Corliss

Under the brand names American & British and especially A & B created between 1914 and 1922 two commercial vehicle series, one of them as Avant-Train with gasoline electric drive . These components were used to subsequently motorize existing horse-drawn vehicles. Such conversion was useful only for very expensive cars. For Avant-Trains , there was quite a demand, such as in firefighting organizations. Motorized firefighting vehicles were very expensive to buy and retrofitting was a cost effective alternative. The conversion of existing, newer horse drawn steam boosters increased their efficiency and uptime while the organization could cut costs by eliminating horse keeping infrastructure. The market for these vehicles was by nature not large and specialized. Therefore, there was less competitive pressure in this niche. However, it was not sustainable and could only exist for a short time.

During the First World War , A & BMC supplied ammunition to the American armed forces. With the end of the war, A & BMC lost its armaments orders and the company had to seek compensation for the resulting loss of production. This may be the reason that they were interested in car production. To the machines and commercial vehicles came a car production. It is not known how the contact with FR Porter came about and what the conditions for the production looked like. Porter was pleased with his design work at Curtiss and did not want to worry about a whole production. Production and sales of Porterreferred to A & BMC . It was based on the construction of the FRP . Although she was now several years old but still modern. The Porter with its high-performance engine of, depending on the source, 100 to 125 bhp still the strongest engine on the market. The only sports cars that came close to performance were the equipped with modified Duesenberg engines Argonne, Biddle, Meteor, ReVere and Roamer, which made up to 103 bhp (up to 106 bhp in ReVere). A & BMC adapted the vehicle concept only in details and did not use short versions. The porter was a very big car with an imposing 142 inch wheelbase. That only 36 copies were produced between 1919 and 1922 must have been a bitter disappointment. This was due to the complex production with many still hard-to-find materials, a horrendously high list price and a short but severe recession, which is due to the farm crisis.

Under the brand names American & British and especially A & B emerged between 1914 and 1922 and commercial vehicles . One source called for the start of vehicle production already in 1906. About these vehicles are hardly any information before. Two trucks are mentioned with a payload of 3 sh. tn. (2720 kg) respectively 5 sh. tn. (4530 kg), which was then classified in the middle or heavy class. Technical data is not available. The competition in the commercial vehicle sector was then very large with dozens of providers.

Others pushed new to the market to make up for the sudden loss of armaments orders. Most of these manufacturers - and probably A & BMC - were " assembler " that their vehicles from components and standardized products together established that they found in a free market.

A second series of the A & BMC consisted of an Avant-Train . This known as a motor wheel or Fore car device is used to give a wagon or a coach later self-propelled. The Avant-Train typically consists of a short chassis with a driven and steerable front axle and the cab and replaces the turntable with wheels and drawbar of the wagon. The resulting from the assembly motor vehicle is often called Avant-Traindesignated. Such vehicles had their greatest spread in the period of the oncoming motor vehicle in the years between 1905 and 1920. Because of the complex drive technology, they were quite expensive; the conversion was therefore worthwhile only on valuable objects. A typical application for Avant-Trains was found in firefighting. Often expensive and durable steam spraying were available. Their conversion increased the efficiency of the syringes and extended their life; A savings effect resulted from the reduction of horse keeping. By its very nature, the market was not large and foreseeable even unsustainable. Discontinued, horse-drawn syringes were increasingly replaced by appropriately equipped trucks.

A special feature of the A & B Avant-Train was its gasoline-electric drive . Here, a conventional internal combustion engine produces power that is passed on to a power generator. This in turn feeds each an electric motor in each front wheel.  The mechanism requires neither transmission nor clutch. A similar concept was used by the Bourne Magnetic Truck Company in Philadelphia for their otherwise conventional rear-wheel drive trucks. The most famous car with this so-called Entz-drive is the Owen Magnetic .

Finley Robertson Porter (1871-1964) of Lowell, Ohio had made a name for himself as the designer of the Mercer Type 35 , from which he derived the successful sports car Raceabout . He then made off with the Finley Robertson Porter Company independently, with the 45 FRP model the strongest US automobile produced this time. The First World War led to a takeover of the operation by the government and the setting of the complex built model 45 for a very small quantity. During the First World War belonged FR Porter as a test engineer to the team in Dayton ( Ohio ) the Liberty engine developed.

After the war, Porter was no longer interested in car manufacturing and took over the position of chief engineer of the Curtiss Engineering Company in Garden City (New York) . The Finley Robertson Porter Company was settled in  1918.

A contract for the exploitation of its automotive patents, Porter awarded to American & British Manufacturing . She organized the production; The sales organization was the New York-based automobile trading firm Morton W. Smith Company . Robert B. Porter , his son and from 1915 himself a designer for FRP , took over the technical management as chief engineer.

Technically, this vehicle was very similar to the FRP and components and components of the Finley Robertson Porter Company appear to have been used up.  The performance was specified at 125 bhp (93.2 kW). Instead of the three chassis lengths with 110, 130 and 140 inches (2794, 3302 or 3556 mm) wheelbase there was now only one with 142 inches (3607 mm).  That was two inches more than the largest FRP had. The vehicle, whose concept dates back to 1914, became obsolete and the Porter became an anachronismwhich included adhering to the right-hand drive . Porter was the last US car brand to hold onto it; even Pierce-Arrow , who was focused on a particularly conservative clientele, was now a left-hander .

Despite the powerful engine - probably still the strongest car engine in the US - the mighty chassis was not well-suited for athletic customers, but it was a very good base for display cars. Known are superstructures of leading coachbuilders such as Brewster , Demarest  or Fleetwood . As with the FRP presented Holbrook working bodies, including even a Speedster.  With 12 vehicles, however, the karossierte Blue Ribbon Body Company most in Bridgeport Porter . The design has been modernized and received a stricter line. The radiator's outline was reminiscent of Rolls-Royce.

The Porter was made from 1919 to 1922; depending on the source, only 34, 36 or 40 copies were produced. Cost already bare chassis US $ 6750 . The car could not withstand the enormous competitive pressure in this market segment and the economic crisis of 1922.

For the first copies of the Porter , components taken over from the FRP were used up. It may explain the model number Model 45 . Accordingly, Model 46 would have been built from new components. In any case, technical differences are not known or too minor to be explained in the available sources. Therefore, unless otherwise noted, the specifications refer to the FRP Model 45 .

The engine was a marvel of lightweight construction and weighed only 580 lb (about 260 kg). It consisted predominantly of aluminum alloys; Crankshaft , camshaft and even the valve tappets were also hollow. The engine has one overhead camshaft and one intake and exhaust valve per cylinder ; Isolated information regarding four-valve technology  unlikely to occur and are only mentioned in isolated sources. When closed, the valves formed a hemispherical end of the combustion chamber. The crankshaft was mounted in triplicate

For the chassis, Porter used new steel alloys. For customers who wanted an individual body, the bare chassis was also available, which was clad at the coachbuilder of his choice.

The long chassis was a very good base for representation cars. Familiar structures of leading coachbuilders such as Brewster  , Demarest  or Fleetwood . As with the FRP, Holbrook provided bodyshops, including a Speedster. With 12 vehicles, however, the karossierte Blue Ribbon Body Company most in Bridgeport Porter .  The design has been modernized and given a stricter lines. The outline of the radiator now reminded Rolls-Royce.

The low volumes of the FRP are understandable due to the production of virtually all components in the house and because of the aborted production after the takeover by the government. The fact that only so few Porters were built, is due to a misjudgment of the market, the difficult economic environment and the fact that the concept of the Porter was no longer new and high-priced four-cylinder automobiles were less and less in demand. This experience was also made by those manufacturers who used similarly exotic Duesenberg Walking Beam and Rochester-Duesenberg four-cylinders, including Argonne , Biddle , Kenworthy, Meteor , Revere , Richelieu and Roamer . 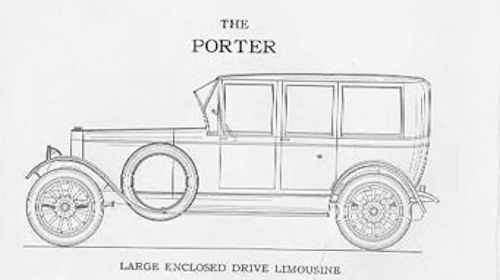