Automotive manufacturer of Pompano Beach , Florida.United States from 1976 to 1989. 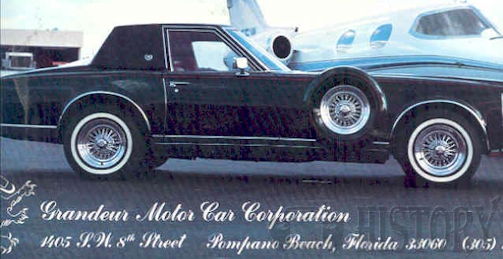 Grandeur Motorcar Corp. was an American manufacturer of luxury automobiles in Florida .

The company was founded on October 8, 1976 in Pompano Beach , Florida . President was Charles R. Northey. The production of automobiles began. The brand name was Grandeur . About 1989 ended production.

On offer were two-seat coupes and convertibles . The base formed its own chassis . The engines came from the Cadillac Seville and Lincoln Versailles . Striking was the long bonnet. To the sides  were spare tire dummies.