Automotive manufacturer of Rochester , NY.United States from 1984 to 1991. 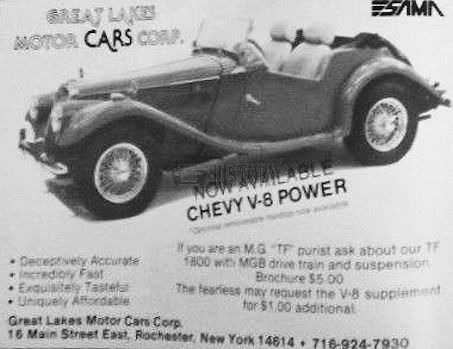 The company was founded on January 23, 1984 in Rochester , New York . First, it turned parts for the restoration of the Ford Model A forth.  1985,  the production of automobiles and kit cars began by taking over a project of Victor Antique Auto . The brand name was Great Lakes . 1989 ended production. On December 23, 1991, the company was dissolved. But Noble Motor Works continued to produce a model.

The first model TF-1800 was the replica of the MG TF of MG . Motor and drive came from the MG B .  The body consisted of plastic .

In 1986, the TF-V8 supplemented the range, in contrast to the first model optionally a V6 or V8 engine from Chevrolet .

Last model was the phantom . He was a mix of replica of the MG PA Airline Coupe and Hot Rod . A V8 engine from Chevrolet.