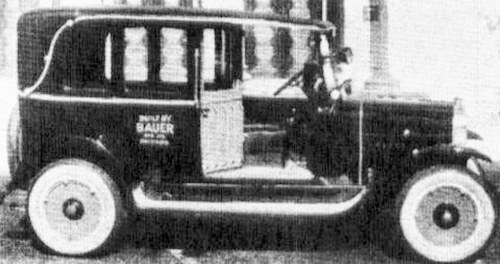 Bauer Taxicab Manufacturing Company was an American manufacturer of Taxi automobiles in the 1920s .The brand name was Bauer .

Perry Bauer, Pand AL Belle Isle, who worked in the taxi business, founded the company in 1924 . They started with the production of Taxi automobiles Designed in collaboration by Karl K. Kizer, t in Chicago in Illinois first show at the 1924 Chicago Auto Show.

The cars were used as taxis  and   known as the Bauer front-door taxicab. A four-cylinder engine from Buda powered the vehicles. The heavy built chassis was referred to as "wreck-proof" because of its rigid body construction this had a 115"( 292 cm) wheelbase. The sedan's door layout was unusual. A door that could not be opened from the inside led to the rear passenger compartment. Another door was mounted on the front passenger's side and struck the B-pillar . It should allow entry and exit to the rear, without disturbing other passengers and doors inside rather than open into the street area.

Bankruptcy began in February 1927 . The production ended from there upon.

There was no connection to the Bauer Machine Works Company , which used the same brand name.