Automotive manufacturer of Framingham , Massachusetts United States from 1922 to 1926. 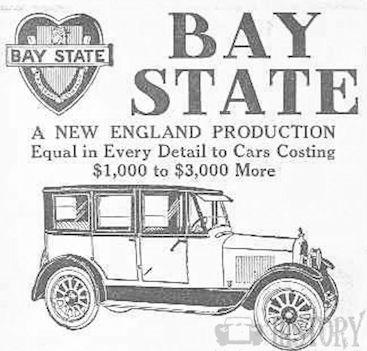 RH Long Company was an American manufacturer of automobiles in the 1920s .

Richard H. Long founded the company in 1922 in Framingham , Massachusetts . The designer was Herbert S. Snow, who previously worked for Peerless , Willys-Overland and Winton . The production of automobiles began, which were marketed as Bay State . Main markets were Massachusetts, Connecticut , Manchester in New Hampshire and Brooklyn . After good sales in the first two years followed the decline of the undercapitalized company. 1926 ended production. A total of 1588 vehicles were created. The Luxor Cab Manufacturing Company took over the factory.

There was no connection to the Bay State Automobile Company , which used the same brand name.

First series was the Model 1 . It powered a six-cylinder engine from the Continental Motors Company with 58 hp . The wheelbase was 307 cm. In 1922 there was this model as a four-seat coupe and a five-seater sedan . In 1923 came five-seat touring car , three-seater roadster , five-seat Brougham and seven-seater sedan. For 1924 and 1925 still sporty designed five-seater touring cars and sedans complemented the selection. The seven-seater sedan now had 325 cm wheelbase.

The Model 2 was added in 1924. It had an eight-cylinder in - line engine from Lycoming , which made 60 hp. Wheelbase and bodies corresponded to the first model.