Automotive manufacturer of Waltham, Massachusetts. United States from 1893 to 1909. 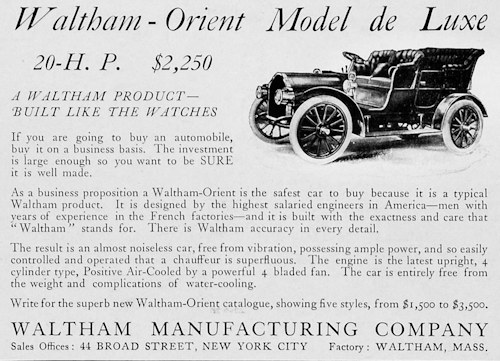 The Waltham Manufacturing Company is a former US manufacturer of bicycles and automobiles of the brands Orient, Waltham and Orient. The company was acquired by the CH Metz Company in 1908 and merged with The Metz Company in 1910.

The production of own tricycles and quadricycles called Orient Autogo and Autogo Quad took place shortly after the introduction of motorcycles. Optionally, each of the 3-horsepower Aster engine or the 5-horsepower De Dion Bouton engine was available. The most famous was probably Licensor for the frame construction of the Orient Cargo.  By late 1901, this production finished.

Automotive engineering began at Waltham Manufacturing with two employees, George M. Tinker and John W. Piper, received from Metz permission in a secluded corner of the plant on the Seyon Street to build a steam car. Two more followed. With the encouragement of Charles Metz left Tinker and Piper the company in early 1900 and founded in the Waltham Automobile Company, which until 1902 or 1903 produced light steam cars.

A notable investor in the Waltham Manufacturing Company was Charles Albert Coffin, the first president of General Electric. In the second half of 1898 he commissioned Tinker and Piper to design an electric vehicle prototype. It is known that the vehicle had a wheelbase of 1524 mm (60 inches), weighed approximately 450 kg (1000 lbs). and got an engine from General Electric (GE). However, neither the designers nor Metz were able to inspire for the construction of other electric vehicles, so it remained in this unique piece. Regardless, built in 1898 Robbins and Metz also a De-Dion Bouton engine in a light frame. This was a slightly larger vehicle than the quadricycle. Little is known about it. Accordingly, it was an engine buggy with Aster or De Dion Bouton engine. 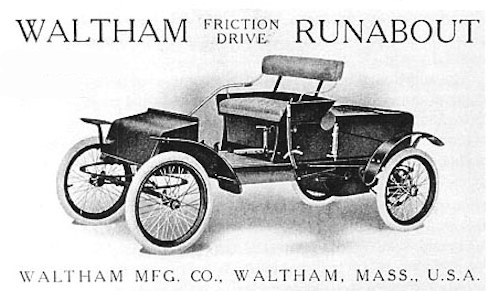 Automobile production was on the premises at the Seyon Street added, separated from the two-wheel and Buckboard construction at the main plant in the Rumford Avenue. Thus Waltham Manufacturing offered around 1900-1901 three types of motor vehicles: Orient and Orient Aster Motorcycles at US $ 250 to 300 Orient Autogo Tricycle from US $ 450 Orient Autogo Quad Quadricycle from US $ 600 Orient Victoriette Motor Buggy from US $ 925; with folding roof US $ 1000 Waltham Manufacturing  Orient Buckboard already introduced in 1902, tiny motor vehicle was dispensed with everything that was not absolutely necessary - initially even on a suspension of the rear axle . At first, they were only front with leaf springs. The single-cylinder engine was housed in the stern standing. The power was transmitted via a friction gear and a belt (later instead of two chains) to the rear axle.

There was no body, on the wooden platform, which formed the ground, a two-bank was mounted in the middle and four fenders protected from the worst spray water. It was steered with the "cow tail" lever, which was then also common for larger cars. The wheelbase was very modest at 80 inches (2032 mm). Of course, the vehicle was very light and therefore could reach the respectable speed of 30 mph (48 km / h), if allowed by the unpaved roads and the suspension. The tank lasted for about 100 miles (161 km). A Buckboard cost of US $ 375 less than half as much as the 1903 Model No. 9 with the same wheelbase, the in-house 8 hp single-cylinder engine and reasonable body. The latter is the then smallest car category, the light cars, assign and thus a forerunner of cycle cars. Buckboards were created before and were mainly distributed in the USA. They also anticipated elements of the Cycle Cars and evolved into a subset of them after becoming available to them with motorcycle technology. Later Orient Buckboard had a real suspension which was by no means a matter of course. In addition, from about 1906, a V-twin with 8 hp was available as an option for the 4-hp buckboards. This engine was quite popular.

Derived from the buckboard was the slightly shorter runabout ER Waltham Manufacturing offered him with the first time with steering knuckle, steering wheel and indicated body. In this form he could almost be considered a light car. With a list price of US $ 1275 he was hardly competitive. Waltham Manufacturing was able to advertise "The cheapest car in the world Everyone should have one. “The Buckboard was built at the factory on Rumford Avenue. Altogether emerged between 2500 and 3250 copies. The sale took place worldwide.

Waltham introduced for the first time in 1904 a small delivery truck Orient Buckboard Delivery with the 4 hp engine in the program.  Officially vehicles for commercial use from 1906 to 1908 were offered. These lightweight delivery vans were available in eight versions with one or two-cylinder engines (the car's familiar 4 or 8 horsepower engines). The customer had a choice of two wheelbases of 98 or 99 inches (2946 or 3200 mm) and a payload of 600 or 800 lb (272 or 363 kg). The most expensive of these Democrat Wagon vehicles for 4-6 people for a price starting at US $ 1850.

From 1905 to 1907 there was the largest variety of models. Four different buckboards with prices between US $ 375 and US $ 525 were offered. There were also two new four-cylinder models. These engines consisted of four single-cylinder engines, which were placed on a common crankshaft. The four-cylinder mentioned were introduced as Orient Light Touring middle class car with 16 hp and a slightly stronger Orient Deluxe Touring with 20 hp. Although there was still no consistent use of the brand name, Waltham increasingly prevailed in the larger models. These vehicles were conventionally built, stuck to the chain drive and had conventional gearboxes.

For a long time, Waltham Manufacturing was unsure about the name under which the automobiles should be sold. After all, Orient was well-established in the bicycle and motorcycle sector, so the extension from the car business would definitely be an option. However, this was offset by the less prestigious Buckboard, which was also marketed as Orient. Waltham Manufacturing eventually chose the worst of all options and at least partially sold the cars as both Orient and Waltham, and the combination of Orient-Waltham. 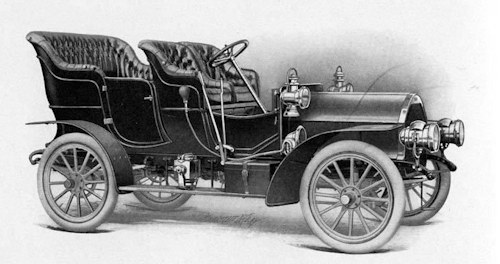