Automotive manufacturer of Toledo Ohio United States from 1903 to 1909.

The Pope Motor Car Company was an American automaker, which was 1903-1909 based in Toledo (Ohio) . She produced automobiles under the name Pope-Toledo .

The Pope Toledo was built until the collapse of the group in 1909. In 1909, the company was acquired by Richard D. Apperson of the American National Bank in Lynchburg, Virginia . After an attempt to revive the prestigious brand she disappeared shortly afterwards from the market. The equipment was sold to the Overland Motor Company , which in turn owned John North Willysand later came to General Motors .

Pope-Toledo was an upscale brand within the Pope Empire, which also included the electric and luxury car manufacturer Columbia , the car and motorcycle manufacturer Pope-Hartford or a Waverley Department called manufacturing plant in Indianapolis (Indiana) , where under the name Pope-Waverley built inexpensive electric vehicles.

The 1903 offered model was an open two-seater with four wheels and front engine. It was powered by a series end-cylinder engine with 2983 cc, which - unusual for the time - had a removable cylinder head. The engine power was transmitted via a three-speed gearbox and one chain to both rear wheels. The car had a mainly wooden frame, which was combined with a steel subframe that carried the main mechanical components. The wheelbase was 2261 mm and the track 1422 mm.

The 1904 model was a larger touring car. He had a tonneau construction with rear entry, offered five people and cost US $ 3500 The front-mounted four-cylinder in-line engine developed 24 bhp (17.6 kW) and there was a three-speed helical gear. The trolley with a steel frame made of box sections weighed 1066 kg. The modern, rear-wheeled car had levers for ignition timing and gas in the steering wheel, then an innovation.

In 1907, there were also limousines and touring cars with seven seats. 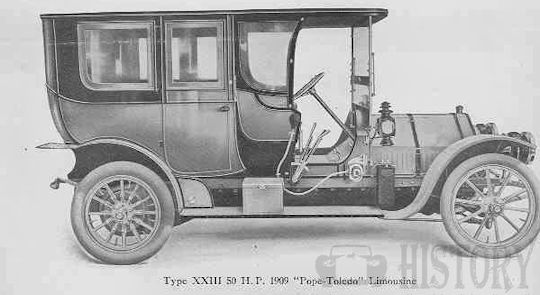