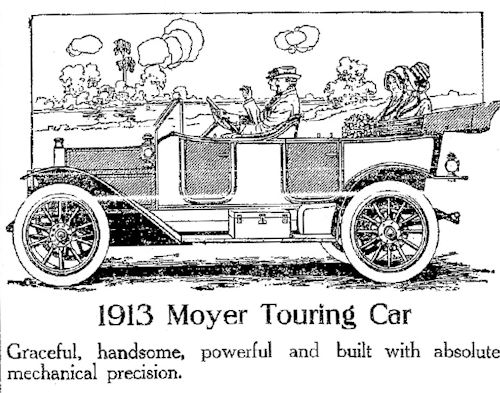 H. A. Moyer Automobile Company (1908–1915), a manufacturer of luxury automobiles in Syracuse, New York, was founded by Harvey A. Moyer (1853–1935) of Clay, New York.The company began business in 1876 in Cicero, New York, as H. A. Moyer Carriage Company. As the era of the horse-drawn carriage came to an end, Moyer switched assembly to motor vehicles, although he still produced carriages for some time after that.

The company later opened an automobile-manufacturing factory and changed their name to H. A. Moyer Automobile Company. They produced sedans and touring cars between the years 1908 and 1914. A six-cylinder touring car cost $3,250 and a four-cylinder was $2,500.

The first cars had a water-cooled, T-head engine and were produced with both runabout and tudor touring car models. By 1912, the company was producing six-cylinder, four-door touring cars.

Over the years, approximately 100 automobiles were built every year, not exceeding 1,000 total.The company headquarters were located at the corner of Wolf and Park streets in Syracuse.

The company was run by father and son, H. A. Moyer and Bert W. Moyer (1873–1935). The founders believed that they sustained in the manufacture of automobiles the reputation made by the company years earlier, when a Moyer Carriage meant the "best carriage that could be made".

The Moyer automobile first appeared in newspapers across the country in 1911 and was announced with much formality, such as this quote from the Lowell Sun that talked about "out-of-town cars";

"The Moyer manufactured by H. A. Moyer, the celebrated carriage builder, is the result of 35 years of experience in the manufacture of high grade vehicles for pleasure use and combines all of the valuable features of that experience as to fine qualities, thorough proportion, elegant finish and design, together with thorough attention to every detail of construction. "

In the first five years of business, close to 500 Moyers were sold. Moyer customers came from all over the United States. The automobiles came in "all colors", and the famed cartoonist Tom Powers ordered a "gaudy" one of robin's-egg blue.

The latest model in 1913 was a two-passenger roadster equipped with a 4½ by 5-inch (130 mm) motor, combination electrical self-starter, ignition and a lighting device. According to Moyer engineer M. Power, the new motor developed 12 percent more power at 1,000 feet (300 m) per minute piston speed than the S.A.E. rating, while the maximum horsepower was developed at a piston speed of over 1,600 feet (490 m) per minute.

Like most new car manufacturers of the day, H. A. Moyer discovered that participation in auto shows was a good marketing tool and provided much needed mention in local newspapers. The shows were also a good place to show off the newest models with the latest technology. The Moyer exhibit in the 1915 Syracuse Automobile Show included a new six-cylinder touring car, a four-cylinder touring car, roadster and chassis. 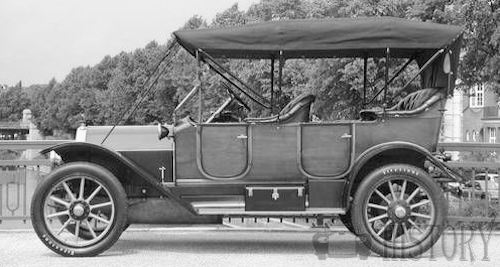 The Moyer was built so well and expensively that it could not be sold at a profit. It had features "too fine" for the appreciation of the average motorist including porcelain-finished cylinder blocks that "literally sparkled when the hood was raised." As a result, the company could not adapt to mass production.

H. A. Moyer becomes a dealer for Stearns-Knight and Velie Automobiles

Following the end of Moyer car production, Moyer became a dealer for Velie Automobiles and Stearns-Knight automobiles. Stearns-Knight operated for only a short period before merging with Willys-Overland.During the period of handmade cars, the competition from new plants in Detroit, Michigan, and Buffalo, New York, was too tough and Moyer was forced to liquidate the business. He later made an attempt to produce typewriters, but the effort did not succeed.

The closing of the plant caused considerable suffering in the city's First Ward because of the resulting unemployment.