Automotive manufacturer of Los Angeles, California;United States of America from 1938 to 1962. 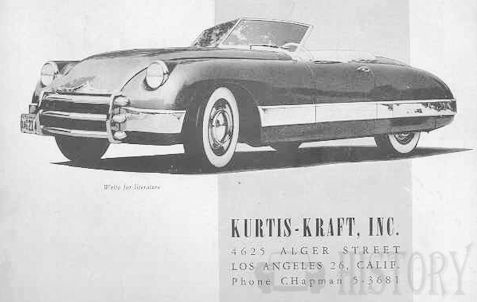 The Kurtis Kraft, Inc. is an American automobile manufacturer and a racing team that primarily by its success in the Indianapolis 500 has been known. The company was founded by Frank Kurtis in 1938 in Los Angeles (California) . Today, the racing team is based in Glendale, California .

In 1938, the company initially built " Midget Cars " (small road car). This class enjoyed growing popularity. After the Second World War was a displacement of 100 to 140 ci (1639-2294 cc). One of the best known engine suppliers was Offenhauser , a cheaper alternative was the engine of the Ford V8-60 with 136 ci (2229 cc), built from 1937 to 1940. In the factory version, he made 60 bhp (44 kW), tuning parts were relatively cheaply available. Kurtis Kraft offered both engine variants. By the early 1950s, the company built 550 midgets and delivered another 600 in modular form for self-assembly by the customer.

Frank Kurtis built his first racing car for the Indianapolis 500 miles in 1941. The car was driven by Sam Hanks ; two more followed. One of them was the first of the well-known Novi Specials . In 1947 he built for himself the Kurtis-Kraft Special , with which he rode the 500 miles in 1948 and was ninth. The car was driven in 1949 as Wynn's Oil Special by Johnnie Parsons, who took the win. In 1951 Jim Robbins finished second. From this he developed the KK2000 (1948-1952). This was followed by the long-lived 500 and 500 S series , now often with Offenhauser four-cylinder engines. Of particular note was the 500A of a Fire power said motor of Chrysler 331 ci (5424 cc) received. The V8 had hemispherical combustion chambers ( HEMI construction) and made about 410 bhp (305.7 kW). The tests were so successful that other teams intervened and the organizer limited the displacement to 270 ci (4424 cc). Although Chrysler adapted the engine, he was unsuccessful in the new configuration, whereupon the project was abandoned . Parallel to the 500 appeared the 4000 which was built until the 1960s.

Between 1947 and 1949, an unknown, but very small number of a modern designed roadster. This Kurtis Omohundro Comet Custom is the first postwar sports car from US production. A copy still exists. The first actual production model after a single piece on the chassis of a Buick from 1942 was presented in 1949. The elegant, two-seater convertible had a wheelbase of 2540 mm and was 4293 mm long. The drive was a side - drive Ford V8 engine with 3917 cc capacity, which developed 100 bhp (74.6 kW) performance. A manual three-speed transmission forwarded the engine power to the rear wheels. By 1950, 36 of these vehicles were built. Subsequently, Kurtis sold the construction to Earl Muntz , who continued to build a revised version of these vehicles under his own name.

Kurtis Kraft 500 KK and 500 M .In 1954, Kurtis again put on a roadworthy vehicle, this time a two-seater roadster . The tubular frame chassis was based on the race car with which Bill Vukovitch won the Indy 500 in 1953 and also had a wheelbase of 2540 mm. Initially, Kurtis sold 30 of these frames under the name 500 KK to private customers, who provided them with fiberglass bodies and engines of their choice. Another 20 frames were built until 1955 to complete vehicles and a model 500 M offered. Also, the 500 M could be equipped with an engine according to customer requirements, but as standard was a top -mounted V8 engine from Cadillacwith 5426 cc capacity, which performed 250 bhp (184 kW) . The engine power was passed through an automatic transmission to the rear wheels. The cars received an elegant GRP body from McCulloch Motors Corporation .