The Apollo was a United States-built sports car/personal automobile manufactured from 1962 to 1964 in Oakland, California.

Frank Reisner, a former chemical engineer born in Hungary, raised in Canada and educated in America,established a company that later produced complete bodies -- painted and trimmed -- for the Apollo as well as the Texas-built Vetta Ventura (which was the same car with a different name). Reisner, on holiday in Italy in 1959, decided that he loved Turin and set up shop there as Intermeccanica producing tuning kits for Renaults, Peugeots, and Simcas.

The Apollo project was the dream of a young California engineer, Milt Brown, who desired to build an American answer to European GTs, such as the Aston Martin DB4 and Ferrari coupes. Brown, who was looking for a coachbuilder, met Reisner at the Monaco Grand Prix in 1960. A deal was made and the first Apollos were built by early 1963 by Brown's International Motor Cars. Intermeccanica hand formed and trimmed the steel bodies in Turin, Italy and then shipped them by sea to Oakland, California, where the drive train was installed. The prototype's design was by Milt Brown's friend, Ron Plescia, but the nose was too long and the rear vision limited, so Reisner commissioned former Bertone stylist Franco Scaglione to revise it.

The finished car, sold by Brown's International Motorcars of Oakland, was well received and had famous owners such as Pat Boone. The base price was $6000 and the top speed was claimed to be 150 mph (240 km/h).

The vehicles and companys

The Apollo was a design that was distributed from 1962 to 1968 by various companies with various names. After the first approach of Milt Brown failed, tried a number of other American manufacturers on the project. The only constant was the Italian body supplier Intermeccanica, which was probably the driving force behind the project in all probability in recent years. After presentation in the American literature it was Intermeccanica owner Frank Reisner, who searched again and again for new enterprises, which could complete and distribute his bodies in America. After several attempts had failed, Intermeccanica ultimately took over the production and distribution itself.

Beginning in the fall of 1962, Milt Brown first marketed his coupe and convertible through his own company. The operation was called International Motorcars Inc. and was based in Oakland , California, Here, the bodies supplied by Intermeccanica were also completed. According to some sources, Jack Griffith was already involved in the project at this stage. In 1966 he was trying to market the car on his own responsibility as Griffith G. The sale was well received, but already in 1964, the company got economic problems. Milt Brown later attributed this to a lack of funding, which prevented him from meeting high demand. According to Brown, he gave from 1964 at Intermeccanica the production of up to 15 bodies per month in order, but had not enough capital to finance the production costs in advance.International Motor Cars sold 42 cars (40 coupes and one spyder, including the prototype) before production stopped in mid-1964 due to lack of financing. IMC then made a contract with Reisner (to keep his operation going) allowing Intermeccanica to supply body/chassis units to Fred Ricketts, owner of Vanguard Industries, an aftermarket supplier of auto air conditioners in Dallas, Texas. Vanguard sold it as the Vetta Ventura. The intent was to give IMC time to find new financing as well as keep Intermeccanica alive.

In the spring of 1965, Brown attempted to maintain operations through new business partners. This he found in the Texascompany Vanguard, which provided enough money, so that 15 already ordered vehicles could be completed. These cars were sold as Vetta Ventura. Shortly thereafter, Vanguard fell into bankruptcy. With that, Milt Brown's Apollo project came to an end.

A handful of Apollos were sold under the name Vetta Ventura after the entry of Vanguard Motors Corporation . The bodies were further built at Intermeccania, the completion of the car, however, took place in Dallas (Texas) . There is different information about the scope of production. What is certain is that the Vetta Ventura was manufactured and sold in any case in 1965; other sources speak of a sale 1964-1966. The data on the production figures vary depending on the source; In any case, they remain in the very low double-digit range.

Vanguard built only 11 cars, with shop foreman Tom Johnson purchasing the leftover 11 body/chassis units and completing them as late as 1971.

Following the demise of Vetta Ventura, rights to the car were sold to Robert Stevens, a California lawyer, who continued production of the car with a newly formed company called Apollo International in Pasadena , California. Here only a few vehicles were created; a source speaks of five copies.

In 1966, Griffith Motors of Plainview, New York , took over the production rights to the Apollo GT. The company had initially provided some British TVR models with American engines and had to look for an alternative after TVR had discontinued the supply of bodywork. Deviating from Milt Brown's original concept, Griffith Motors used Eight Cylinders from Plymouth . The prototype received a 6.4 liter (383 cui) engine; the production cars, however, were from one from the Plymouth Barracudapowered engine with 4.6 liters (273 cui) displacement, which delivered 235 SAE-PS. The engine was connected as standard with a Torque-Flite automatic; Optionally, a manual five-speed transmission was available. The designated Griffith GT car was offered in the summer of 1966 for $ 6095; He was nearly $ 1000 cheaper than the Vetta Ventura. The Griffith GT was only produced in individual copies. Jack Griffith, owner of Griffith Motors, had built a new plant for the GT, but was in economic distress as a result of the investment and had to give up the project early.

After Griffith Motors had failed in the year 1966 to launch a series production of Brown's sports car, took over the Manhassat, New York- based company Suspensions International production rights. Suspensions International moved into the body shells of Intermeccanica continue, but left the completion of the car of the racing teams in the workshops Holman & Moody in Charlotte , North Carolina . Visually and technically there were few changes; However, now a 4.7-liter eight-cylinder Ford was used. The car was called Omega GT and was offered for $ 8900, which he was almost twice as expensive as oneChevrolet Corvette . The production of the Omega GT was maintained until 1968.

In the second half of 1968, the involvement of Suspensions International ended. From then on, Intermeccanica in Turin carried out the complete production of the vehicle on its own responsibility. The cars were distributed until 1970 under the name Intermeccanica Torino or Italia .

A pair of Apollo 3500 GTs were used to portray the Thorndyke Special race car which was featured in The Love Bug, a 1968 Disney movie. One of the pair has been fully restored.

Apollo 3500 GT in the The Love Bug movie 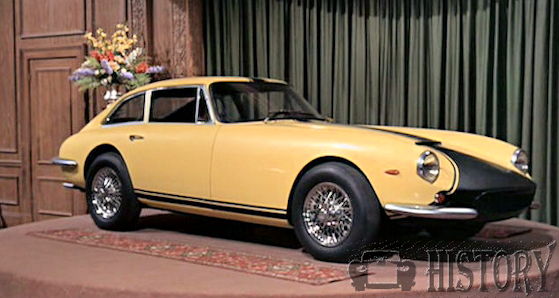