Automotive manufacturer of Berkeley , California; United States of America from 1982 to 1989. 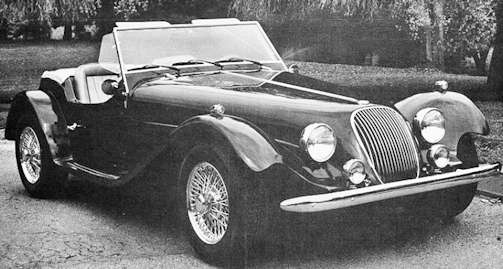 Apollo Motor Cars Inc. was a US manufacturer of Neo classic style retro automobiles in the 1980s. The brand name was Apollo .

The company was founded on August 6, 1982 in 825 Gilman Street Berkeley , California . Milt Brown and Ron Plescia are named as owners.

In 1963, Milt Brown and Ron Plescia designed and built the Apollo GT, a handsome fastback coupe made famous as the mysterious bright yellow sports car used by 'baddies' in the first 'Herbie' film! Almost twenty years later, Brown and Plescia were back again with another Apollo, this time the graceful Verona,They began in 1982 with the production of automobiles a European style roadster in the classic Morgan mould. Offered in component form or fully built..  As of 1984 were also kit cars available.  The last sign of life dates of 14 February 1989. Later Verona Automobile acquired the rights and manufactured the vehicles under its own name in Germany.

The model was a roadster named the Verona . It was similar to a Morgan type model . However, this had a grille in the style of the Jaguar XK 150 . A tubular steel frame formed the basis. The wheel suspensions came from General Motors . V6 engines from Buick , V8 engines from Ford , six-cylinder in - line engines from BMW and undefined engines from Chevrolet were available.

the Verona is powered by a 3.8 litre Buick V6, although Chevrolet V8 and Jaguar V 12 units are also offered. With 200 horsepower on tap, and weighing only 2410 lbs, the Verona is graced with stunning acceleration, putting the roadster in the Corvette and Ferrari league. Quality of construction and engineering integrity are beyond question and the entire package is finding favour with the Beverly Hills set whose obsession with such indulgent offerings is well known.

In 1986, a variant as a convertible supplemented the range, which was only available as a kit . The vehicle had a larger wheelbase and thus offered more space for a larger engine and a larger interior. In addition to a V8 engine, a Jaguar V12 engine was also available.