The Triumph Acclaim was a front-wheel drive medium-sized family car made by British Leyland (BL) from 1981 to 1984. It was based on the Honda Ballade and used a Honda-designed engine, but met United Kingdom component-content requirements. It was the final model of the Triumph marque.

The development process began in 1978, when British Leyland entered into negotiations with Honda to develop a new small family saloon. This was originally intended as a stopgap measure until the Maestro/Montego models were to be ready for production in 1983. On 26 December 1979 Michael Edwardes officially signed a collaboration between the two companies. The new car went into production 18 months later, badged as the Triumph Acclaim and based on the Honda Ballade. It replaced the Triumph Dolomite of the 1970s. The Acclaim was officially launched by BL on 7 October 1981. The end of Dolomite and TR7 production meant that the Acclaim was the only car to wear the Triumph badge after 1981.

The Acclaim was significant as the first essentially Japanese car to be built within the European Economic Community (now the European Union), to bypass Japan's voluntary limit of 11 percent market of the total number of European sales. The Acclaim was also a major turnaround point for BL itself, with the car sporting good reliability and build quality from the outset. The Acclaim holds the record for the fewest warranty claims for a BL car. Unlike previous Triumphs, it was assembled at the Pressed Steel Fisher Plant at Cowley Oxford, taking over the withdrawn Austin Maxi production lines. It paved the way for the Honda-based, Rover-badged range of cars which BL (and successor organisations Austin Rover and Rover Group) would develop throughout the 1980s and 1990s.

The most notable outward change from the Honda was the appearance of a central badge on the grille. At the time, the Japanese model had "Honda" to the right-hand side of the grille. Other changes included twin Keihin carburettors (the Ballade had only a single carburettor), the mirrors were situated on the doors, the independent front and rear MacPherson strut suspension was tweaked for the UK market and the seats were based on Morris Ital frames. The Acclaim was provided in a more luxurious interior trim than its Honda equivalent, even in its base models. The brakes were disc at the front and drum at the rear.

All Acclaims were powered by the transverse-mounted all alloy and overhead-cam 1335 cc engine found in the Honda Civic driving the front wheels through either a five-speed manual gearbox or a three-speed Trio-matic (which was a manually selectable automatic transmission) gearbox (the same as the Hondamatic) and the interior was nearly identical (except for the seats). The usual BL trim levels were offered: L, HL, HLS and the top of the range CD, which had front and rear electric windows, chrome bumpers, headlamp washers, 165/70 tyres (the L had 145/80 tyres and the HL & HLS had 155/80 tyres), plastic wheel trims, velour upholstery with seat pockets on the back of the front seats, front seat head restraints and optional air conditioning. The car remained largely the same throughout its production life. A Mark 2 version of the Acclaim came out in 1983 (from VI No. 180415 onwards). The main changes were to the exterior door handles, an electronic digital clock replaced the previous mechanical one, a restyled steering wheel, a restyled gear knob, the rear interior door handles (they were just swapped) and the heater recirculation control, which was moved. Mark 2 HL and HLS cars were better equipped than the earlier ones. 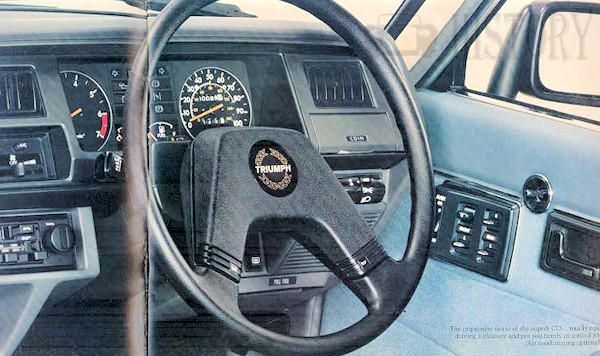 There was a limited-edition Avon Acclaim that had leather seats with piping to match the body colour, leather door panels, wooden and leather trimmed dashboard, wooden door cappings, two-tone metallic paint, colour-coded wheels with chrome embellishers, chrome-plated grille, colour-coded headlamp surrounds, vinyl roof and extra soundproofing. There was also an Avon Turbo, which had Lunar alloy wheels with 205/60 tyres, suede upholstery, front air dam, and side decals. A Turbo Technics turbocharger increased the engine's power output from the standard 70 bhp to 105 bhp. It is thought that there are only four surviving Avon Turbos including the press car (VWK689X), which was the first Avon Turbo.

In 1982 and 1983, the Acclaim featured in the top-ten-selling cars in Britain, the first Triumph to achieve this feat since records began in 1965.

Production finished in the summer of 1984 when the Rover 200 was launched, based on the next incarnation of the Honda Ballade. A total of 133,625 Acclaims were produced, the vast majority of which were sold in the UK.The last Acclaim off the production line (a silver CD with the Trio-matic) is now in the Heritage Motor Centre. The Acclaim's demise saw the end of the Triumph marque as a car (although the name continues in motorcycles), as Austin Rover's restructuring retained only the Austin, Rover and MG marques.

On Sunday 9 October 2011, to celebrate the 30th anniversary of the launch of the Acclaim, 23 Acclaims were gathered at the Cowley works where the cars were built and the Heritage Motor Centre. This included the oldest known surviving Acclaim, the first Avon Turbo, the final production Acclaim and the only known nut-and-bolt restored Acclaim. 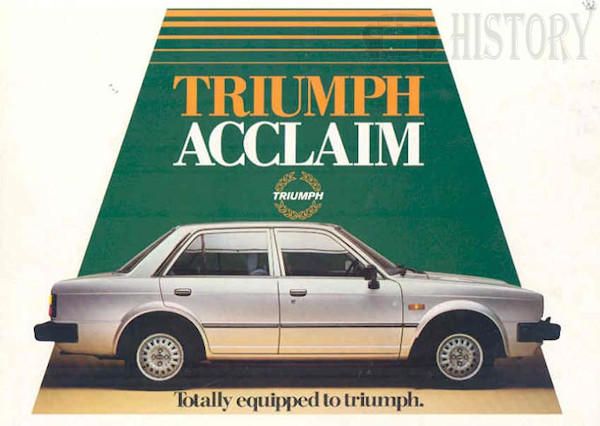