The Triumph TR7 is a sports car manufactured from September 1974 to October 1981 by the Triumph Motor Company (which was part of British Leyland) in the United Kingdom. It was initially produced at the Speke, Liverpool factory.moving to Canley, Coventry in 1978 and then finally to the Rover Solihull plant in 1980. The car was launched in the United States in January 1975, with its UK home market debut in May 1976. The UK launch was delayed at least twice because of high demand for the vehicle in the US.

The car was characterised by its "wedge" shape, which was commonly advertised as: "The Shape of Things to Come", and by a swage line sweeping down from the rear wing to just behind the front wheel. The design was penned by Harris Mann who also designed the wedge-shaped Princess. The car had an overall length of 160 inches (406 cm), width of 66 inches (168 cm), wheelbase of 85 inches (216 cm) and height of 49.5 inches (126 cm). The coupé had a kerbside weight of 2205 pounds (1000 kg). During development, the TR7 was referred to by the code name "Bullet". Rumours that it was earmarked as a possible replacement for the MGB are unfounded. Original full size model wore MG logos because it was styled at Longbridge which was not a Triumph factory.

Power was provided by a 105 bhp (78 kW) (92 bhp or 69 kW in the North American version) 1,998 cc eight-valve four-cylinder engine that shared the same basic design as the Triumph Dolomite Sprint engine, mounted in-line at the front of the car. Drive was to the rear wheels via a four-speed gearbox initially with optional five-speed manual gearbox, or three-speed automatic from 1976. The front independent suspension used coil spring and damper struts and lower single link at the front, and at the rear was a four-link system, again with coil springs. There were front and rear anti roll bars, with disc brakes at the front and drums at the rear. 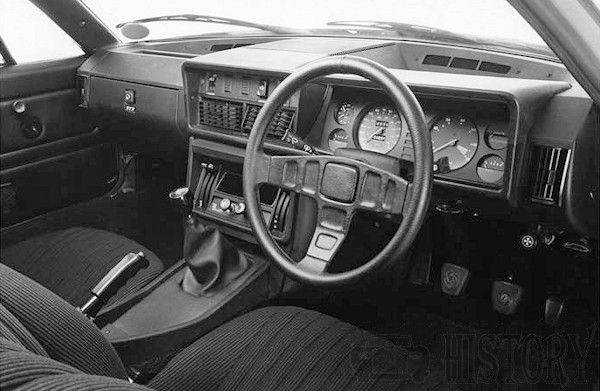 The development of the convertible version of the TR7 required the interior light, which was in the headlining, to be removed. This was replaced by lights with integral switches in each of the door cards. A map light, mounted between the seats on the back panel below the rear parcel shelf, was deleted. The convertible also required a smaller fuel filler cap, as the deck area in front of the boot lid was reduced to allow for the stowage of the hood. These modifications were also applied to the hard top for the 1978 year model (starting after the factory summer shutdown in 1977), presumably to maintain commonality of parts on the assembly line. The wheel trims were also changed at this time, from smaller black trims that covered only the centre of the wheels, to larger silver ones, covering the whole wheel. However, only a small number of 1978 year model cars, with the smaller filler cap and lights in the door cards, were produced at Speke, due to the industrial action there in 1977-8.

The development of a V8 engined version, which became the Triumph TR8, required an addition bulge in the bonnet, to clear the carburettors. This produced the "double bulge" or "double bump" bonnet, characteristic of TR7s and TR8s built at Canley and Solihull. However, at least some of the TR7s built at Canley had single bump bonnets; though it is possible these were cars that had not been completed at Speke, possibly due to the industrial action there, and finished off at Canley after production was moved

During production at Canley, the seat trim was again revised, with a plaid cloth in navy blue or tan, with matching coloured leather effect edging, and matching door cards. A further trim change during production at Solihull saw the use of a ruched velour in blue or tan on the seats, with matching inserts on the doors. Also, the internal door lock buttons were changed from the earlier standard BL round ones, to rectangular buttons held on with small grub screws. There was also a change to the trip mile counter's reset button, which became a push type operated through the instrument "glass", rather than a turn type under the dash.

Various British Leyland vehicles were driven by the lead characters in the British secret agent television series The New Avengers, produced between 1976 and 1977. Amongst them was a yellow TR7 hardtop driven by the character Purdey. The car was immortalised as a children's Dinky Toy and Revell construction kit.

In 1978 Coca-Cola and Levi's ran promotional competitions with the top prizes being three TR7s in special red and white Coke livery. They also featured denim upholstery and genuine jean patch pockets on the door interiors. Also included were a 12V fridge in the boot and a TV in the glove compartment. Two of the three Coca Cola cars are known to still exist. 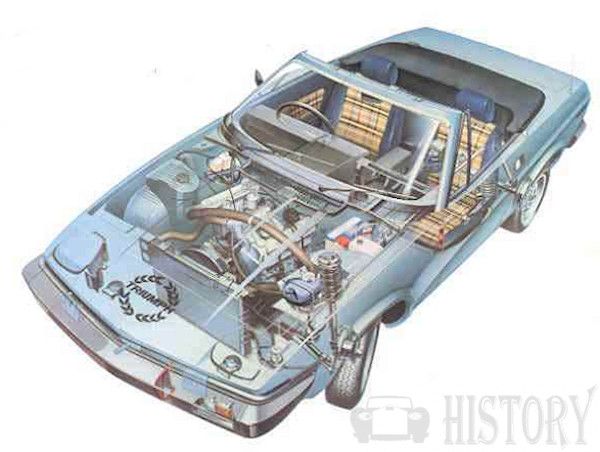 Because of proposed US legislation on roll-over protection at the time of its launch, the TR7 was not initially available as a convertible. In early 1979, Triumph belatedly introduced a convertible version, called the TR7 Drophead Coupé (DHC), which first went on sale in the US (the original hardtop model being known as the Fixedhead Coupé, or FHC). A small number of pre-production cars were manufactured at Speke in 1978, soon after the pre-production TR7 V8 (later designated TR8) and TR7 Sprint cars. The British market received it in early 1980. The prototype for the convertible version of the original Harris Mann design came from Michelotti and the engineering to make it work was done by Triumph.

For export to the US market, Triumph created a much more powerful Triumph TR8 model in 1977/78, which was a TR7 with a 135 bhp (101 kW) 3.5 L Rover V8 engine. While some genuine TR8 models stayed in Britain, these examples are exceedingly rare. Most TR8s went to the US, where they did not fare well due to both Triumph's poor build quality at the time and the unusually strong pound which peaked at around $2.40 by 1980, making Triumphs fairly expensive compared to competitors.

In 1980, a limited edition version of the TR7 Drophead was launched for the US market by the US importer. Called the TR7 Spider, it was available only in Maraschino Black, with reflective red striping and badging. Alloy wheels and the steering wheel from the TR8 were fitted, along with a "pewter grey" carpet and grey striped upholstery. It is thought around 1,270 Spiders were built at the Solihull factory, of which 400 were fuel-injected California cars. However, VIN numbers for Spiders run from 400300 to 401918 overall and for the fuel-injected version from 401400 to 401918, suggesting higher numbers were produced. Most of the Spider-specific equipment consisted of dealer-installed items.

A variant of the TR7 powered by the Dolomite Sprint engine (dubbed the TR7 Sprint) was developed, but never put into full production because of labour problems at the Speke factory and the factory's subsequent closure. According to a search of records at the British Motor Industry Heritage Trust (BMIHT), it appears that 60 to 62 prototype and pre-production cars, all Fixedheads, were made in three batches during 1977, at the same time as the pre-production runs for the convertibles and TR7 V8s.

Preparations for full production of the TR7 Sprint stopped with the closure of the Speke Plant. These cars, of which several still exist in the UK, can be identified by a different chassis number to the production 8-valve model: prefixed ACH rather than ACG, etc. The original engines are also numbered with the format CHnnnHE, rather than the VAnnnnHE format of Dolomite 16 valve engines. Despite cancelling the TR7 Sprint before full production began, British Leyland had it homologated for use in competition.

"There are a [comparatively] large number of privately built Sprint conversions about... Buyers should beware of this if they are asked a premium price for an alleged 'genuine' TR7 Sprint." Converting a two-valve TR7 to the four-valve Sprint specification is relatively simple, compared to conversion to TR8 specification, because the TR7 and TR7 Sprint share a virtually identical engine block. As a result, there are a number of such converted TR7 models around. 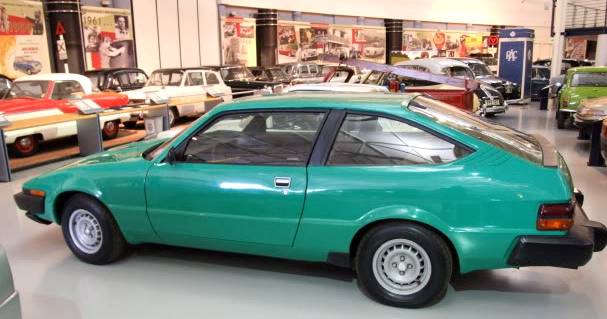 While the TR7 was under development in the early 1970s, a 2+2 fastback derivative, codenamed Lynx was also planned. The Lynx had a wheelbase stretched by 12 inches (300 mm), the Rover V8 engine, with the rear axle from the Rover SD1. Scheduled for launch in 1978, the Lynx was cancelled when the Speke factory was closed.

In early 1979, a joint MG/Triumph project to produce a new sportscar based on the TR7 was started under the name Project Broadside. This was based on the TR7, with a wheelbase stretched by 5 inches (130 mm), with either an O-Series or Rover V8 engine, and both drophead and fastback body styles. Project Broadside was cancelled later in 1979, due to a lack of funding.

Examples of both Lynx and Broadside can be seen at the BMIHT, Gaydon, England.

During the latter part of 1979, as an exercise in badge engineering, another MG version of the TR7 was developed under the codename Boxer as a potential replacement for the MGB. Various concepts were presented and ultimately a design from BL's American headquarters at Leonia was accepted. Major changes to the standard TR7 Hardtop were the addition of a MG-type grille to the nose panel, headlights similar to those of a Porsche 928 and a new tail panel with light units from a Rover SD1. The proposal was ultimately rejected on the grounds that the car was insufficiently different from the TR7.

British Leyland ran a team of TR7s in rally competitions from 1976 to 1980. These cars initially used the 16-valve Dolomite Sprint engine and later switched to the Rover V8 engine (before the introduction of the TR8, so dubbed "TR7 V8"). They were reasonably successful on tarmac events but were less successful on gravel sections. The most successful driver of these cars was Tony Pond.

The TR7-V8 models continue to be successful in classic rallying events.

Quality problems tended to undermine the car's image in the market place. This was primarily the result of the poor relations between management and workforce and frequent strikes at the Speke factory. Quality improved when production was moved to Canley and later Solihull, however it was too late to save the car's reputation.

In its Frankfurt Motor Show preview edition of September 1977, the German magazine Auto, Motor und Sport reported that the engine of a TR7 press car had given up the ghost and "started to boil" while undergoing a maximum speed measurement exercise over a 4 km (2.5 miles) stretch of track as part of a road test. At the time of the report the cause of the problem was still unknown; British Leyland technicians had already been investigating the car, without comment, for nineteen days.

In total approximately 115,000 TR7 models were built which includes 28,864 soft top/convertibles, and approximately 2,500 TR8 models. As part of a rationalisation introduced by BL boss Sir Michael Edwardes, the Triumph TR7 was axed in 1981 when the Solihull factory ceased making cars. 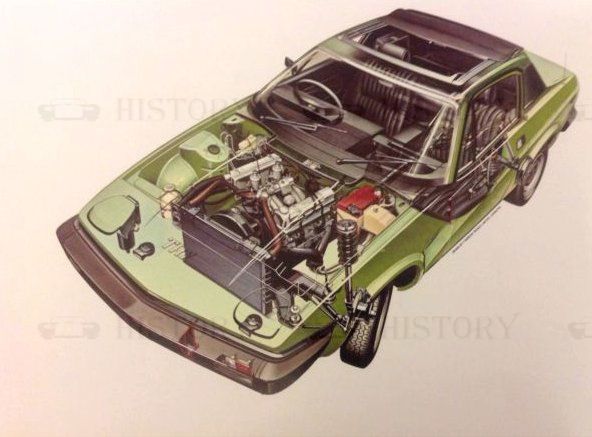