The Triumph Stag is a British car sold between 1970 and 1978 by the Triumph Motor Company, styled by Italian designer Giovanni Michelotti.

Envisioned as a luxury sports car, the Triumph Stag was designed to compete directly with the Mercedes-Benz SL class models. All Stags were four-seater convertible coupés, but for structural rigidity – and to meet new American rollover standards of the time – the Stag required a B-pillar "roll bar" hoop connected to the windscreen frame by a T-bar. A removable hardtop was a popular factory option for the early Stags, and was later supplied as a standard fitment.

The car started as a styling experiment cut and shaped from a 1963–4 Triumph 2000 pre-production saloon, which had also been styled by Michelotti, and loaned to him by Harry Webster, Director of Engineering at Triumph from the early to late 1960s. Their agreement was that if Webster liked the design, Triumph could use the prototype as the basis of a new Triumph model. Harry Webster, who was a long time friend of Giovanni Michelotti, whom he called "Micho", absolutely loved the design and spirited the prototype back to England. The end result, a two-door drop head (convertible), had little in common with the styling of its progenitor 2000, but retained the suspension and drive line. Triumph liked the Michelotti design so much that they propagated the styling lines of the Stag into the new T2000/T2500 saloon and estate model lines of the 1970s.

The initial Stag design was based around the saloon's 2.5-litre engine, and Harry Webster intended the Stag, large saloons and estate cars to use a new Triumph-designed overhead cam (OHC) 2.5-litre fuel injected (PI) V8. Under the direction of Harry Webster's successor, Spen King in 1968, the new Triumph OHC 2.5 PI V8 was enlarged to 2997 cc (3.0 litres) to increase torque. To meet emission standards in the USA, a key target market, the troublesome mechanical fuel injection was dropped in favour of dual Zenith-Stromberg 175 CDSE carburettors. A key aim of Triumph's engineering strategy at the time was to create a family of engines of different size around a common crankshaft. This would enable the production of power plants of capacity between 1.5 and 4 litres, sharing many parts, and hence offering economies of manufacturing scale and of mechanic training. A number of iterations of this design went into production, notably a slant four-cylinder engine used in the later Triumph Dolomite and Triumph TR7, and a variant manufactured by StanPart that was initially used in the Saab 99. The Stag's V8 was the first of these engines into production. Sometimes described as two four-cylinder engines Siamesed together, it is more correct to say that the later four-cylinder versions were half a Stag engine (the left half). 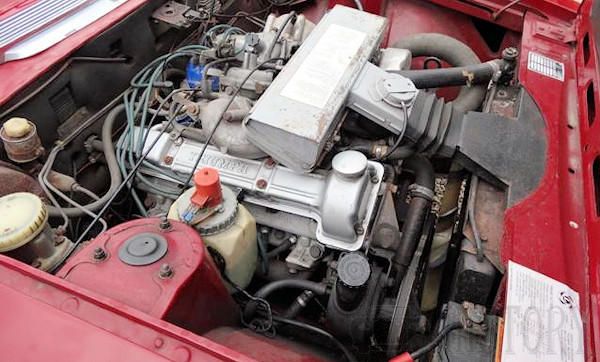 It has sometimes been alleged that Triumph were instructed to use the proven all-aluminium Rover V8, originally designed by Buick, but claimed that it would not fit. Although there was a factory attempt by Triumph to fit a Rover engine, which was pronounced unsuccessful, the decision to go with the Triumph V8 was probably driven more by the wider engineering strategy and by the fact that the Buick's different weight and torque characteristics would have entailed substantial re-engineering of the Stag when it was almost ready to go on sale. Furthermore Rover, also owned by British Leyland, could not necessarily have supplied the numbers of V8 engines to match the anticipated production of the Stag anyway.

As in the Triumph 2000 model line, monocoque construction was employed, as was fully independent suspension – MacPherson struts in front, semi-trailing arms at the rear. Braking was by front disc and rear drum brakes, while steering was power-assisted rack and pinion.

The car was launched one year late in 1970, to a warm welcome at the various international auto shows. The Stag rapidly acquired a reputation for mechanical unreliability, usually in the form of overheating. These problems arose from a variety of causes.

First, the late changes to the engine gave rise to design features that were questionable from an engineering perspective. For example, the water pump was set above the engine. If the engine became hot in traffic, coolant escaped from system via the expansion bottle and the overall fluid level then fell below the level of the pump. As well as preventing coolant from circulating, this also caused rapid failure of the pump. Even when the system was topped up again, the failed water pump would not circulate coolant and further overheating ensued. Water pump failures also occurred due to poorly hardened drive gears, which wore out prematurely and stopped the water pump.

A second cause of engine trouble was the choice of materials. The block was made from iron and the heads from aluminium, a novel mixture that required the use of corrosion-inhibiting antifreeze all year round. This point was not widely appreciated either by owners or by the dealer network supporting them. Consequently the engines were affected by electrolytic corrosion, so that corroded alloy debris came loose and was distributed around inside the engine.

A third cause of trouble was the engine's use of long, simplex roller link chains, which would first stretch and then often fail inside fewer than 25,000 miles (40,200 km), resulting in expensive damage. Even before failing, a stretched timing chain would skip links and cause valves to lift and fall in the wrong sequence, so that valves hit pistons and damaged both.

Another problem with the cylinder heads was the arrangement of cylinder head fixing studs, half of which were vertical and the other half at an angle. The angled studs when heated and cooled, expanded and contracted at a different rate to the alloy heads, causing sideways forces which caused premature failure of the cylinder head gaskets. Anecdotally this arrangement was to reduce production costs as the cylinder head mounting studs and bolt were all accessible with the rocker covers fitted. This allowed the factory to completely assemble the cylinder head assembly before fitting to the engine. However this was not possible in the end due to the cam chain fitting and setting of the cam timing requiring the removal or the rocker covers.

Finally, although pre-production engines cast by an outside foundry performed well, those fitted to production cars were made very poorly in house by a plant troubled with industrial unrest and poor quality control. Poor manufacturing standards also gave rise to head warpage, and head gaskets that restricted coolant flow, which also led to overheating.

This combination of design, manufacturing and maintenance flaws caused a large number of engine failures. Time magazine rated the Triumph Stag as one of the 50 worst cars ever made.

At the time, British Leyland never provided sufficient budget to correct the few design issues of the Triumph 3.0 litre OHC V8. The Stag, also, was always a relatively rare car. British Leyland had around 2,500 UK dealers when the Stag was on sale and a total of around 19,000 were sold in the UK. Thus the average dealer sold only seven or eight Stags during the car's whole production run, or roughly one car per year. This meant that few dealers saw defective Stags often enough to recognise and diagnose the root cause of the various problems. Many owners simply replaced the engine altogether, often with the Rover V8, Ford Essex V6, Buick 231 V6, or with the Triumph 6-cylinder engine around which the car was originally designed.

Perhaps thanks to such a reputation for its unreliable engine, only 25,877 cars were produced between 1970 and 1977. Of this number, 6780 were export models, of which 2871 went to the United States. Several variants were produced, indicated by the factory as; initial production, 1st–2nd-3rd–4th "sanction" changes as noted only in changes of the production numbering sequences, and these have become unofficially designated as "Early" Mk I 1970, the Mk I (1971–1972/3), Mk II (1973) and "Late" Mk II (1974–1977). The addition of twin coachlines is an indication of a Mk II variant. Non-domestic markets such as the USA comprised unique combinations of features specifically directed for compliance of various States and marketing, Factory designated as "Federal Specification", included vinyl covered hard tops, Federal Department of Transportation compliant lighting, a wide range of anti-smog emissions changes not found on other market vehicles.

Whilst official Triumph parts manuals may differentiate variants by commission plate ranges, it is common (from owner's observations) that minor parts for the old variant may turn up in early productions of the new variant. For example Mk2 cars have been known to have Mk1 wiring looms or door latches. Triumph either took the opportunity of clearing out the parts bin or quality control was not their best attribute.

The majority of cars were fitted with a Borg-Warner 3-speed automatic transmission. The other choice was a derivative of the ancient Triumph TR2 gearbox which had been modified and improved over the years for use in the TR4/A/IRS/TR5/250/6. The first gear ratio was raised and needle roller bearings were used in place of the bronze bushings on the layshaft. Early 4-speed manual transmission models could be ordered with an A-type Laycock overdrive unit and later ones frequently came with a J-type Laycock unit. The overdrive option is highly desirable as the engine RPM drops significantly with this option in 3rd and 4th (top) gears.

Other than the choice of transmissions there were very few factory-installed options. On early cars buyers could choose to have the car fitted with just the soft-top, just the hard-top (with the hood storage compartment empty) or with both. Later cars were supplied with both roofs. Three wheel styles were offered. The standard fitments were steel wheels with Rostyle "tin-plate" trims. Five-spoke alloy wheels were an option, as were a set of traditional steel spoke wheels with "knock-off"' hubcaps. The latter were more commonly found on Stags sold in North America on Federal Specification vehicles.

Electric windows, power steering and power-assisted brakes were standard. Options included air conditioning, a luggage rack, uprated Koni shock absorbers, floor mats and Lucas Square Eight fog lamps, and a range of aftermarket products, most of which were dealer installed as optional accessories could also be fitted. Rather unusually for a 4-seat touring car, the accessory list included a sump protector plate that was never produced. This was probably included as a slightly "gimmicky" tribute to Triumph's rallying successes. 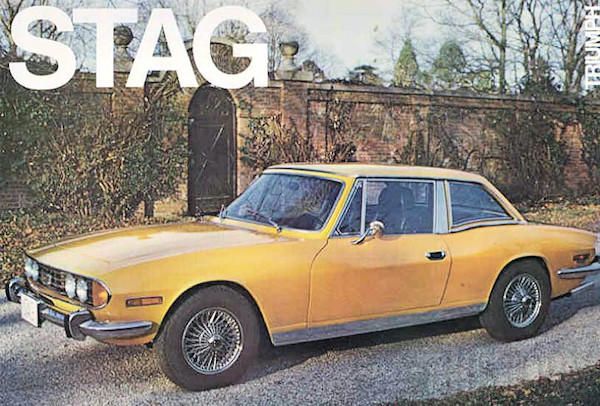 The Triumph Stag has sizeable club and owner support and a number of specialist suppliers. According to the main enthusiast club in the UK, approximately 9,000 Stags are believed to survive in the United Kingdom. The car's popularity is due to its performance, comparative rarity and its Michelotti styling. The problems associated with the car over the years have been solved by those enthusiast clubs supporting the Stag, elevating this classic to its intended place in popularity envisioned by its designers..

James Bond film Diamonds Are Forever Triumph Stag Peter Franks Commandeered by Bond at the Port of Dover, after Franks is arrested. 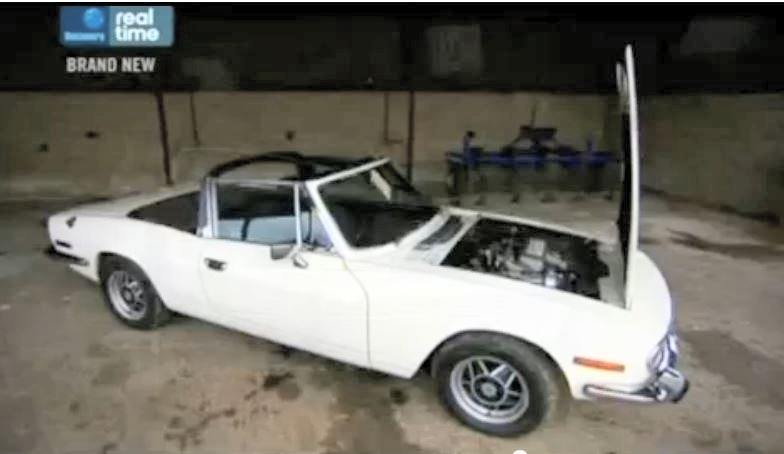