In May 1996, the J70 series underwent a makeover and emerged as the J90 series Prado, an independent series. The body was lengthened. The design remained medium duty, like the J70. The front suspension was replaced with an independent design, shared with Tacoma and Hilux Surf, made by Hino. The J90 was made by Tahara Plant.

Available as a three-door short wheelbase

In Japan, the 3-door series started with an R in the series ranging from RZ, RX, RS to RJ while the 5-door line-up started with T in the series ranging from TZ, TX, TS, to TJ. All models came with front double wishbone and 4 linked suspension as well as full-time 4WD. ABS and a Field Monitor showing altimeter, thermometer and pressure were standard in all the models. The field monitor was not available as standard equipment in South Africa. Television display and audio set was optional.

By June 1999, minor changes were made. In order to follow new laws, fog-lamps were added to the bumper, except in South Africa. In July 2000, a new diesel engine, the 3.0 L (2982 cc) Common Rail Diesel Injection (D-4D) 1KD-FTV was introduced into this model. To reduce theft, an engine immobilizer was available. TX Limited with 8 seats used TX base with roof rail, rear under mirror, wood panel finish, arm rest, optitron meter, base cooling as well as rear heater was introduced into this series.

When the Prado was launched in the UK in 1996, it was called the Land Cruiser Colorado and replaced the 4Runner, which had been discontinued from sale. It was called this to distinguish it from the larger Land Cruiser – renamed as the Land Cruiser Amazon – which was already on sale. It dropped the Colorado name tag in 2003, when it was renamed simply Land Cruiser. In the Republic of Ireland most Land Cruisers were sold as commercials with the side windows and seats removed for tax reasons.

In Europe it is sold as simply the Toyota Land Cruiser LC3, LC4 or LC5 (depending on the generation) or with the number series designation (LC 70, LC 90 and LC 120). In North America it is not part of the Land Cruiser range, as the Toyota 4Runner replaces the Land Cruiser Prado's affordable trim levels, while the expensive trim levels are instead sold as the Lexus GX 470, with nearly identical body panels and a V8 engine. 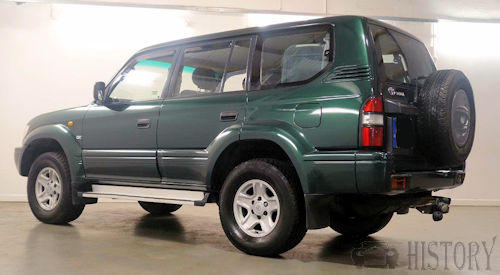